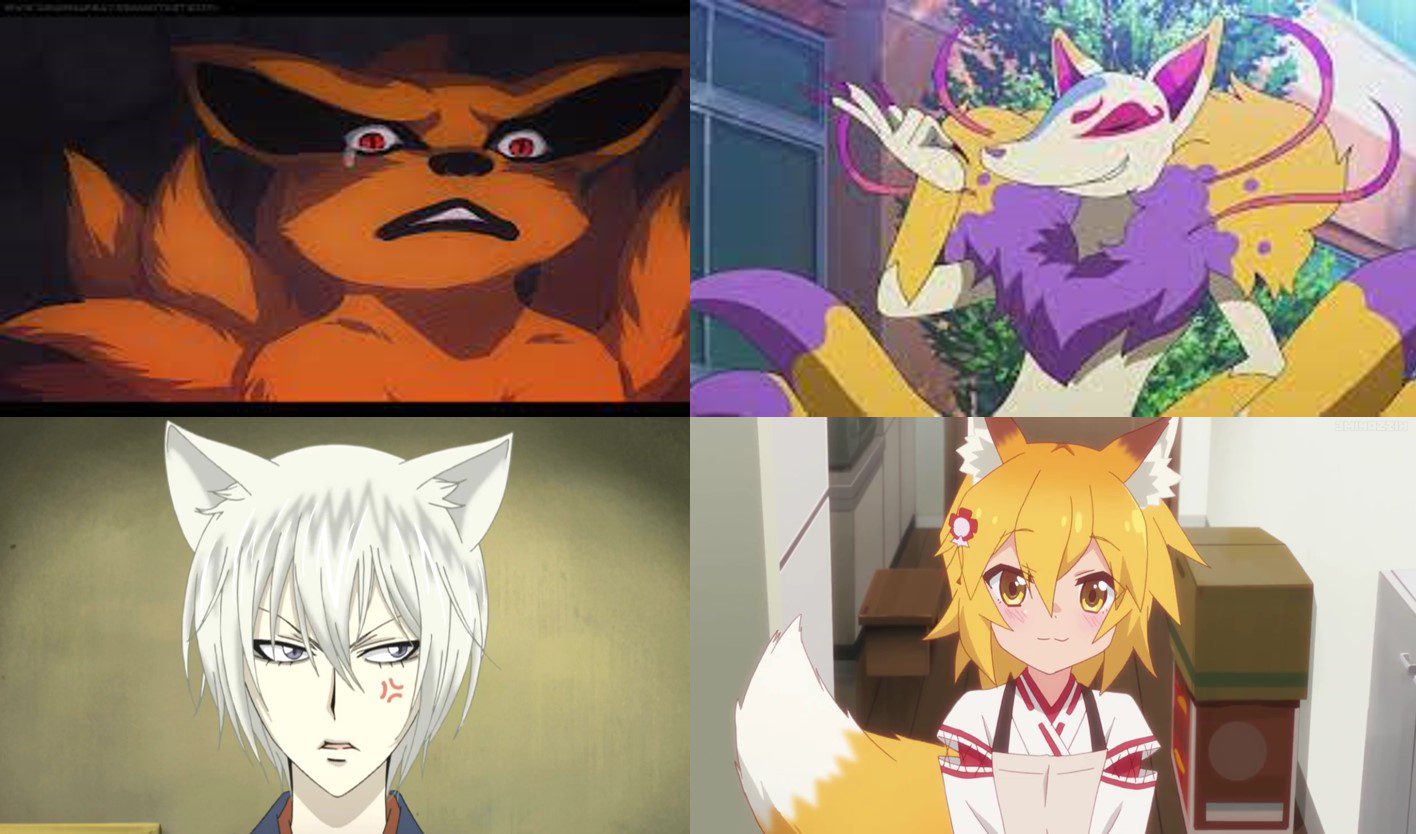 The world of anime doesn’t only introduce us to human characters and tell us realistic stories. It also has a collection of diverse characters that gives the storyline a new perspective or boost. These characters range from cute talking cats to human-eating ghouls. One of the groups from these diverse creatures is called the Kitsune. In fact, this is one of the most common “species” you can find in anime.

Kitsune are basically fox characters with human features, or they could be human characters with fox features. Regardless, these fox characters can be one of the most powerful races in anime as the idea originates from Eastern Folklore. Normal foxes were believed to live for 100 years, and with their age, they grew more tails which gave them magical powers like shape-shifting.

10 Kitsune or Fox Characters in Anime:

Kitsune or fox folklore has many versions in Korea, Japan, China, and Vietnam. Although Japan calls these creatures the Kitsune, they are also known by the names Kumiho, Huli Jing, and Ho tinh. These creatures are thus as famous as the myth of dragons in Eastern Culture. This fox spirit symbolizes auspiciousness. However, in some places, they are considered to be impish. Below mentioned are some fox characters that mostly have both the qualities of being auspicious as well as impish.

Kurama is probably the most famous fox character known. In fact, he is literally called the nine-tailed demon fox. He is from the anime Naruto and ends up being one of the most loved characters in the series. Although he was shown as someone scary in the beginning, as the anime progresses, we see that he too has a backstory and also a soft side to him.

Initially, Kurama appears to be someone who could bring doom to Naruto. This is evident when he tries to take over Naruto multiple times. Naruto also had to endure the pain of being shunned away by his fellow villages as a kid. However, when we finally know Kurama’s story, we can see that he isn’t mean, but he is just angry at the way people had been treating him. For more than half of the series, he was referred to as a demon fox rather than by his name. Luckily, towards the end of the series, we see the unspoken and silent bond that Naruto and Kurama had shared over all the years bloom into something great that in turn helps Naruto in his battles.

From the shojo genre, Kamisama Kiss, Tomoe is one of the famous fox characters in anime. He is a fox yokai that was abandoned to care for a decaying shrine that belonged to a Land God. He is several hundred years old and is very deceptive and, most of the time, hot-headed. Aware of his handsomeness, he even uses his charms to get his way.

Besides this, he is a strong fox character as he can use an ability called the Kitsunebi, which means fox-fire. He also can control others by using enchanted leaves. Although initially, he dislikes the female lead of the anime, Nanami Momozono, he eventually falls in love with her.

One of the main characters from the anime Yu Yu Hakusho, Yoko Kurama, is a “demon fox”. Yoko Kurama’s story is rather an interesting one as he wasn’t born a fox. His story began when he was a baby as the real demon fox put his soul in him while he was on a chase. As he grows up, he strives to create a balance between his two personas – as a human and as a fox.

Usually, he is seen as someone who is witty and scheming as well as analytical. However, he is also shown as someone who truly cares about his friends. His intelligence is his most powerful weapon, along with his other abilities like the “Rose Whip” and “Seed of the Death Plant”.

Another character that is related to the tale of the nine-tailed fox spirit. Soushi Miketsukami is a character from Inu x Boku Secret Service. He is seen as a calm person who has a soft spot for Ririchiyo Shirakiin, the female lead of the anime. Soushi works as a Secret Service agent and is assigned to Ririchiyo. He can transform himself into a yokai form as he is the reincarnation of the nine-tailed fox spirit.

His story is a little bit interesting as he is reincarnated again due to some bad happenings. However, his reincarnation cannot remember much about his love interest. He is considered the most powerful Secret Service agent. When using his nine-tail fox powers, he transforms into his yokai form, growing nine-tails himself.

This adorable kitsune is from the anime Inuyasha. Although he is still very young, he decided to avenge his late father by becoming much stronger. He attempts to rob the Shikon Jewel pieces from Kagome and Inuyasha however, he is unsuccessful. Instead, he joins the two on their journey.

He is determined to develop his fox traits and become strong. He trains to take the Fox Demon Exams. In the end, he becomes an instructor at the fox-demon school and teaches aspiring kids like he used to be.

Kemono Jihen is a supernatural anime that has an interesting story. In the anime, we are introduced to various kinds of humans who also happen to be half-vampires, half-spiders, or half-ghouls. Interesting, right?

In the anime, we also have a kitsune character whose name is Yoko Inari. She belongs to the kitsune species, although her appearance wouldn’t make it seem like it. She is the Metropolitan Police Department’s head. Interestingly, her coat is sectioned into 9 parts as it flows down, which is a representation of the nine-tailed fox. She also possesses the ability to create illusions and uses them as well as manipulation of words to get her way.

God of Highschool is an anime that is adapted from a manhwa. This anime doesn’t literally have a kitsune character however, there is a character that wields the powers of the nine-tailed fox. One of the main supporting characters is named Park Ilpyo. Before I talk about him, let me explain what a “Charyeok” means. In the anime, the characters have the ability to borrow powers from gods, demons, or supernatural beings based on a contract. This borrowed power is referred to as Charyeok.

Ilpyo borrows the power of the nine-tailed demon fox, giving him fox-like features with 9 tails. Although he is already considered to be a powerful character in the series, using this ability makes him more powerful, giving him additional abilities like speed and enhanced strength.

This kitsune stands as a guard at the Saeki shrine. He is a laid-back character who is more than 300 years old. He also is the messenger of the gods, but before he took on this role, he was an ordinary fox. After being injured by a farmer, he was helped by a priestess.

He also had a partner named Kinjiro who left him to guard the shrine on his. Although he looks intimidating, he has a caring nature, and he enjoys eating tangerines. He has the abilities of fortune telling as well as can search for missing people or animals.

Do not fall for her child-like appearance as Senko-san is more than 800 years old. The main character of this anime is Kuroto, and by the looks of it, he has a lot of “darkness” in his life. To eradicate this darkness, Senko-san, a kitsune, is sent from the Kitsune World.

She tries her best to make Kuroto happy by listening and cooking food for him. Along with being Kuroto’s support, she also has the abilities like creating portals and magic barriers, telekinesis, flight, and fox-fire.

Perhaps the best-looking fox character out there since Kyubi’s kitsune form is very colorful. Kyubi is a character from Yo-kai Watch. This anime is inspired by the game of the same name, which is heavily based on Japanese Folklore. The game, as well as anime, thus, introduce us to various mythical beings from these folklores.

Kyubi has a human form that appears to look like a child. However, his personality is the opposite of his appearance. He can appear cold and serious and is often seen pointing out the flaws of others. His powers are mostly fire-based, and he also uses his tails to attack.