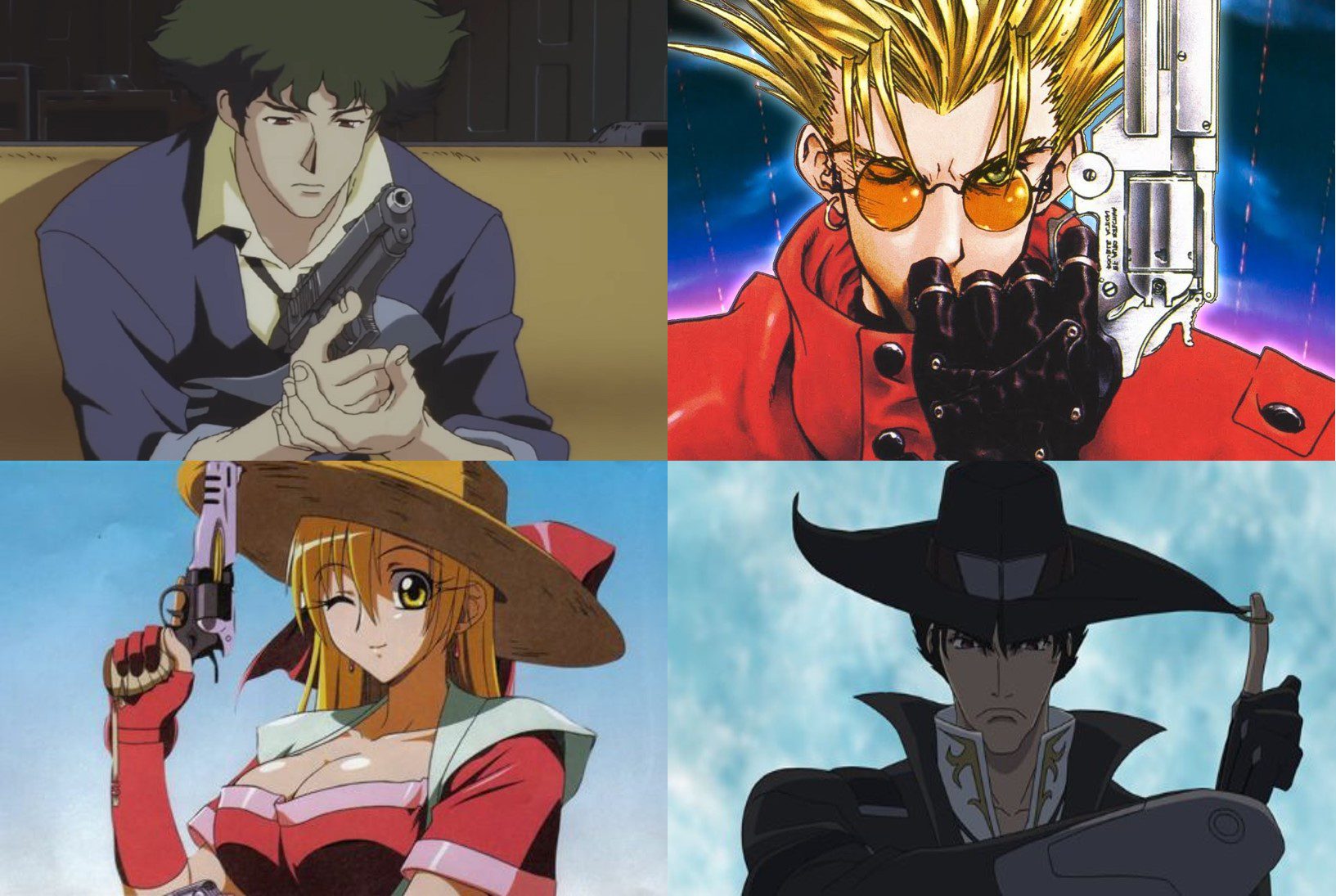 Anime has various genres and most of them often introduce us to different themes. These themes have a way to give off different vibes. Not only this but sometimes these genres, along with their themes and the vibes they give off, have a way of giving us insights into a time period from the past. For instance, the ones that give off Cowboy vibes definitely have such an impact. The genre as a whole is known as the “Western” genre. The Western genre is something that has been around for a long time and is used throughout various media forms. It introduces us to the time period or themes related to the Western part of the United States from the 18500s to the 19th century.

The Western genre includes concepts that indulge in the daily life and conflicts of cowpokes. The main characters belonging to this genre usually are depicted as outlaws or are often seen looking for treasures. They are also portrayed as people standing with the law and fighting crimes. Of course, fights involving guns are the cherry on top of these stories. As mentioned above, anime is one such media that has implemented themes from this genre in its stories. Below mentioned are 10 anime that give off cowboy vibes.

When you think of Western and Anime, Cowboy Bebop is probably the first anime that pops into mind. However, instead of taking us to the past, it introduces us to a futuristic world where the setting is very similar to a wild western America. Not only this but it combines the Western themes with Sci-Fi, making it an even more interesting setting. It introduces us to an almost inhabitable Earth, fifty years after the hyperspace gateway accident. The story revolves around Spike Spiegel.

Spike and his friends are bounty hunters working on Bebop, their spaceship. Together they get into many troubling situations. Cowboy Bebop is known to be one of the best anime ever made involving the most lovable protagonists. It is created by Sunrise, Inc. now known as Bandai Namco Filmworks, Inc. It is an anime series containing 26 episodes.

Another anime similar to Cowboy Bebop is Trigun. However, the latter takes a deeper dive into the Western genre. Trigun is an anime that introduces similar sci-fi and cowboy themes in its story. It introduces us to a planet known as No Man’s Land. The main protagonist, Vash the Stampede is seen fighting off bounty hunters that are trying to chase him for the huge sum of bounty on his head. The anime, thus, looks into the past and present past of Vash in its 26 episodes. It is adapted from a manga written and illustrated by Yasuhiro Nightow. Yasuhiro Nightow was a fan of the Western genre and thus, incorporated its themes in his creation. It anime series was produced by Madhouse Studio.

The next anime is one of the oldest anime that gives off vibes from old West America. Gun Frontier is a manga created by Matsumoto Leiji. Leiji is famous for creating the classical hero series involving Captain Harlock. Gun Frontier follows up on the story of the hero’s best friend named Oyama Tochiro and his adventures. The anime overall is comedic in nature with many themes that revolve around the wild old west. The manga series ran from the year 1972 to 1975. Vega Entertainment adapted the manga into a 13-episode anime series in 2002.

Another anime with a post-apocalyptic scenario is Desert Punks. However, the setting in the anime only focuses on Japan after a nuclear catastrophe. Japan, now turned into a desert, consists of the survivors trying to live their lives in their new yet poor surroundings. It introduces us to the protagonist named Kanta Mizuno or Desert Punk. The anime, thus, focuses on the adventures of this desert punk as he comes across conflicting situations, interesting friends, and troubling foes. The manga series is written as well as illustrated by Masatoshi Usune and ran from 1997 to 2020. The anime series was produced by the studio Gonzo and came out in the year 2004.

The next anime very interestingly combines steampunk themes with western as well as historical themes. Appare-Ranman! is an anime that came out not very long ago. The setting of the anime takes us back to the Meiji Era of Japan wherein a noble’s son named Appare Sorano is interested in inventing new things. We are then introduced to the second protagonist who is a Samurai as well as the guardian of Appare named Kosame Ishiki.

They both, because of an accident, get stranded in the sea and are then taken to Los Angeles after being saved by a steamship. In order to make some money there, they decide to participate in the “Trans-America Wild Race”. Appare builds them an automobile for the race. Together they try to win races and fight off other racers in hopes of getting back to Japan.

Appare-Ranman! is a manga written and illustrated by Masakazu Hashimoto and Ahndongshik, respectively. In 2020, the studio P. A. Works came out with its animated series.

This anime gives us a western-themed setting. Also known as Kino’s Adventure, the anime introduces us to Kino and her bond with a talking motorcycle named Hermes. Kino and Hermes travel around without any aim or destination. Regardless of this, they come across many customs and people around the world. This anime, thus, gives us insights into the many people Kino and Hermes meet. They both, however, do not try to influence nor are much influenced by the people they meet and just being bystanders by watching people live their daily lives.

Kino’s Journey is based on a light novel series written and illustrated by Keiichi Sigsawa and Kouhaku Kuroboshi, respectively. A.C.G.T and Genco Studios made a 13-episode anime series out of this story in 2003.

Another anime based on a light novel series is Baccano! This anime has many action scenes that are often introduced in western-themed series. This anime is also famous for introducing us to various sorts of people ranging from alchemists to mafias. Connecting their stories are the characters Isaac and Miria. However, the series has multiple points of view giving us deeper insights into each character, and their actions have consequences that each character must face.

As mentioned above, Baccano! is an award-winning light novel series written by Ryogo Narita. It was adapted into an anime series with 16 episodes by the studio Brain’s Base in 2007.

The next anime mostly focuses on bounty hunting. It introduces us to the early 1900s after the Russo-Japanese war. This story centers around the character Sugimoto Saichi, also known as, Sugimoto the Immortal thanks to his crazy survival instincts. Sugimoto comes across a man who tells him of a hidden treasure that belonged to a massacred Ainu group. Although not believing the story initially, he comes across a dead man with the map to the treasure tattooed on his back. Remembering the promise he made to his dying best friend of taking care of the latter’s family, he decided to find the treasure.

However, the dead man was killed by a bear and soon was about to attack Sugimoto. He was saved by a girl named Asirpa. Aspirpa reveals herself to be the daughter of one of the slaughtered Ainu men and thus joins forces with Sugimoto to find the treasure. Golden Kamuy is a manga written and illustrated by Noda Satoru. It was adapted into an anime by Geno Studio. By the end of 2022, Brain’s Base studio will produce the fourth season of the anime. it is also worth mentioning that the Ainu language is supervised by an Ainu linguist from Chiba University named Hiroshi Nakagawa.

Next up is an anime that involves a lot of gunfights as well as sword fights. Grenadier introduces us to the adventures of a skilled gunwoman and a swordsman named Tendo Rushuna and Kojima Yajiro, respectively. Together they travel around the world to stop people from fighting by trying to create peace. Although not wanted to fight, Rushuna is sometimes forced to use her gun in order to make others lose their will to fight. The manga is written by Sosuke Kaise. Studio Live along with Group TAC produced the anime series in 2004.

Lastly, we have the anime Gun X Sword which has themes similar to the western genre. It introduces us to a world where rogues roam around freely. The main character Van has lost his bride to a “Clawed Man”. Thus, he looks for this man in order to seek revenge. Along with him, there are many other people in search of this clawed man too. He also meets a girl named Wendy. Wendy pleads with Van to help her find her kidnapped brother. In the end, he unveils the secrets behind the clawed man as well as the kidnapping of Wendy’s brother. The anime is an originals series produced by the studio AIC ASTA 2005.