Russell Crowe makes his MCU debut as Zeus in the upcoming Thor: Love and Thunder

Zeus has finally entered the MCU with Thor: Love and Thunder giving us our first look at the god. Yep, the massively long-awaited trailer for Thor: Love and Thunder has finally arrived and it involves a glimpse at Zeus. Clocking in at under one and a half minutes, the teaser is by far one of the most visually stunning sneak peeks at a Marvel movie. With hype, speculations, and excitement aplenty, Marvel finally delivered and the trailer’s finally out. But what does the trailer give away and what it does not is the matter of discussion, and discussion we shall have.

So here commences our dive into one of the very brief but exciting peeks at a new character in the series — the Greek God Zeus. Although the Thor 4 teaser trailer does not reward our laborious and exhaustive wait with a look at Christian Bale’s antagonist Gorr the God Butcher, it makes up for it by jolting us with a plethora of grand new landscapes and set pieces. With so much to discuss, dissect, and dig into, let’s keep our probing confined to Zeus’s arrival.

Here’s our first look at Zeus in the first-ever official teaser trailer to Thor: Love and Thunder;

Russel Crowe Dons the Cape As Zeus in the First Thor: Love and Thunder Trailer

Although we don’t see his face, it’s pretty clear that Russell Crowe is portraying the role of the Greek God. At around the 50-second mark in the teaser, we see Zeus catch one of his lightning bolts. Interestingly, one of many lightning bolts that he catches seem to be made out of an Uru-like metal. It also implies that these bolts have properties similar to that of the Mjolnir and Stormbreaker. However, not much can be said about these bolts at this point. Another great thing that the trailer gives us is the first look at Olympus — the dimension that Zeus and the rest of the geek god pantheon reside in. We can see Thor travel to numerous worlds replete with wonders and adventures. 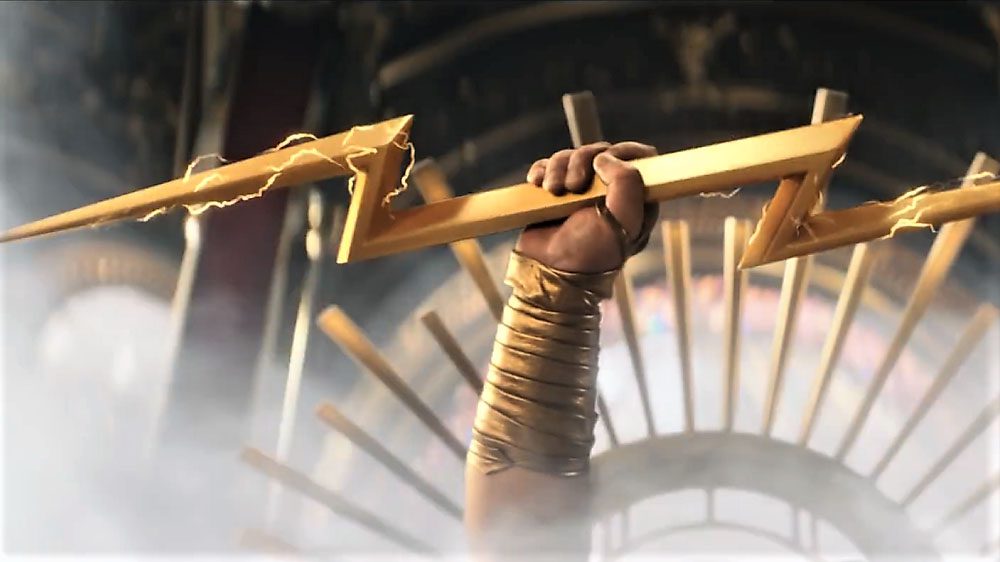 It seems that Thor is using his Stormbreaker to travel to these new worlds. Fans would remember how the ax of the Asgardian god possesses the power to open Bifrost. One of these many exciting new worlds and frontiers that the Asgardian will explore in the movie is Olympus. It seems to be a place that shares a striking resemblance with Asgard, not in terms of the architecture but in terms of the sheer technological advancements. Coming back to Zeus, the Greek God seems to revel in the Olympian glory, akin to how the real world mythology entails.

With a thousand lighting bolts swishing by and creating a light show, Zeus addresses a large gathering. The grandeur in his addressal is much similar to that of the Grandmaster in Thor 3. However, just as the Grandmaster faced a not-so-glorious end by the time the credits rolled, Zeus’s fate might entail something similar. We know the God Butcher is on his hunt for the gods and he’d be indiscriminate towards the Greek pantheon as well. However, at this point, we can’t really speculate much as to how that’ll play out. In the meantime, let’s bask in the sheer wonder and awe that the trailer has inspired within hours of it dropping.