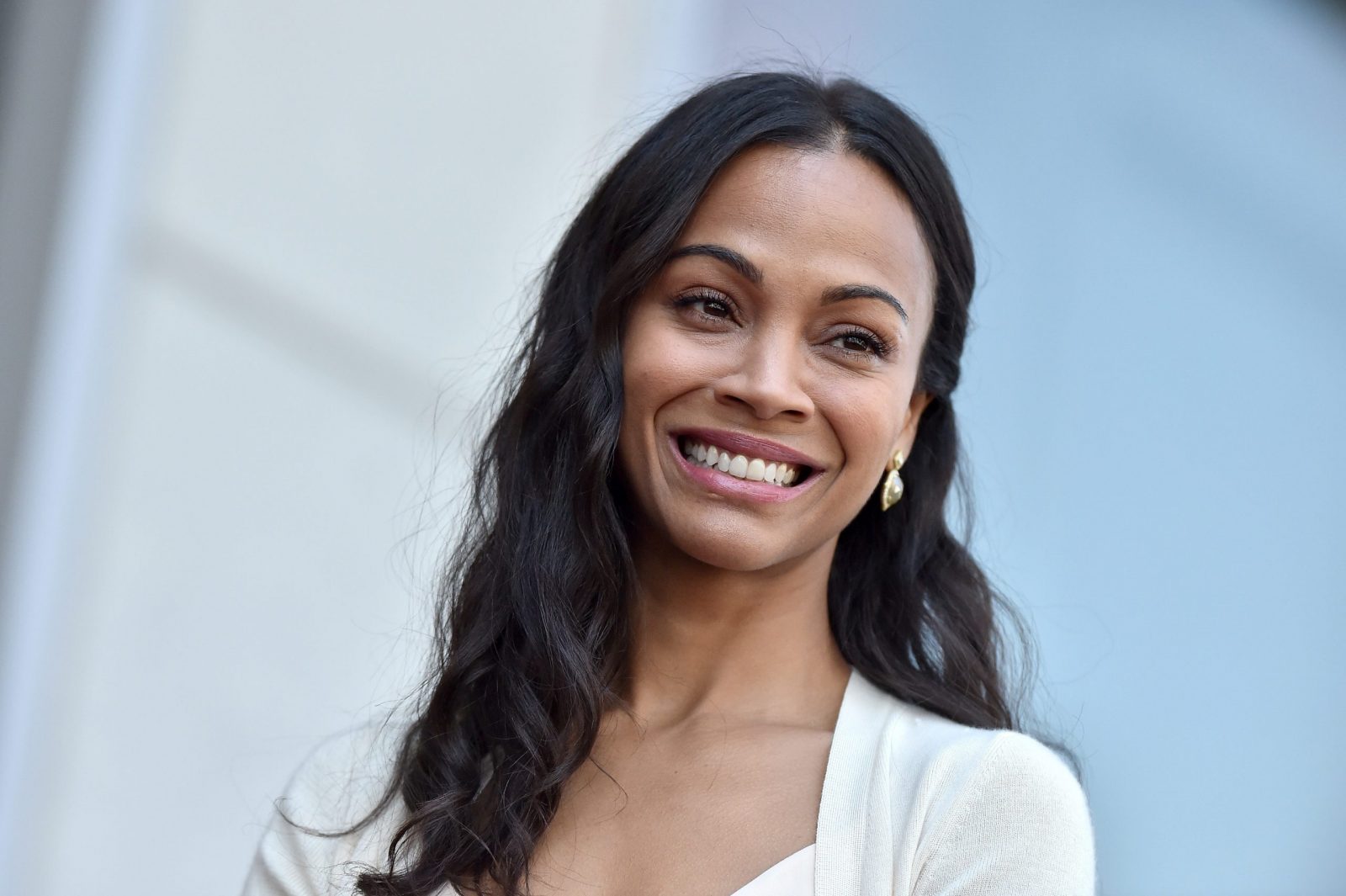 We all know the popular American dancer and actress Zoe Saldana who rose to stardom with some of her megahit movies which are Pirates of the Caribbean: The Curse of the Black Pearl, Star Trek Avatar as well as Star Trek Into Darkness. Not only is she a good actress but also she is an awesome ballet dancer. Since from the very childhood, she likes to explore different fields. She tried some theater shows as well. During the days when she was a theater artist as well, she used to be a major part in different plays of popular groups namely. She did plays for FACES as well as for New York Youth theater group. She was a part of these popular groups till she started her career on the big screen.

Being a passionate star it was never tough for her to get to the limelight of Hollywood. In her era, she has a range of highest-grossing films around the world. Other than that what makes him catch the eye of the audience and the critics as well is her was to draw any role smoothly that is her versatility. In her whole career to date, she never restricted herself to a particular genre. With her acting, she covers almost all the genres of movies starting from romantic comedy to tragedy, science fiction to action movies, and many more. The concentration that she gives in her role and the efforts make her one of the most versatile actresses in the Hollywood industry to date. Not only is she an awesome actor but also a sagacious businesswoman. 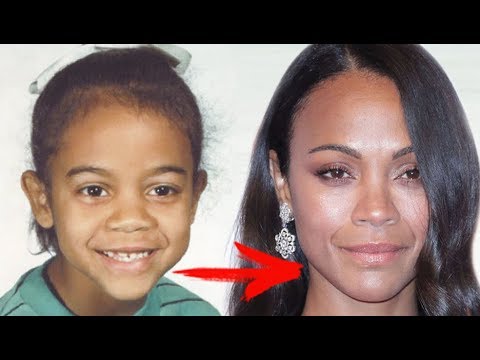 Zoe Saldana as a kid and now

Born on the 19th of June in 1978 in the beautiful city of Passaic which is in New Jersey. Her father was Aridio Saldana and her mother was Asalia Nazario. Saldana was not the only child of her parents. She had three siblings that are two sisters namely Cisely and Mariel and a half-brother named Nipo. Being from a mixed-race family that is her father is from the Dominican Republic and her mother is from Puerto Rican, her birth name was a mixture of both races, was Christened Zoe Yadira Saldana Nazario. Other than having her root from her parents home countries she also claims to have her roots from Lebanese and Haitian

In her days of early childhood, her dwelling place with her parents was at the Jackson Height, in Queens which is in New York. she with her family stayed there for many years. From her childhood, she was a bilingual kid that is she was fluent in both English as well as in Spanish. But as fate may happen, her father expired in a car accident when she was just a kid of 9years. In consequence of that, she with her two sisters and her mother moved to their father’s home,e town to stay with her grandparents. With time she developed a strong passion for dancing. She got enrolled in one of the popular schools in the Dominican Republic named ECOS Espacio de Danza Academy. It was in her dance academy where she learned different dance forms. From a very early age, she considered ballet as her love.

At the tender age of nine, she lost her father to a car accident. Consequently, she along with her two sisters and mother shifted base to the Dominican Republic, to live with her grandparents. It was in the Dominican Republic that Saldana discovered her passion and love for dancing. She soon enrolled herself at ECOS Espacio de Danza Academy where she was taught varied forms of dance. Ballet turned out to be her first love. 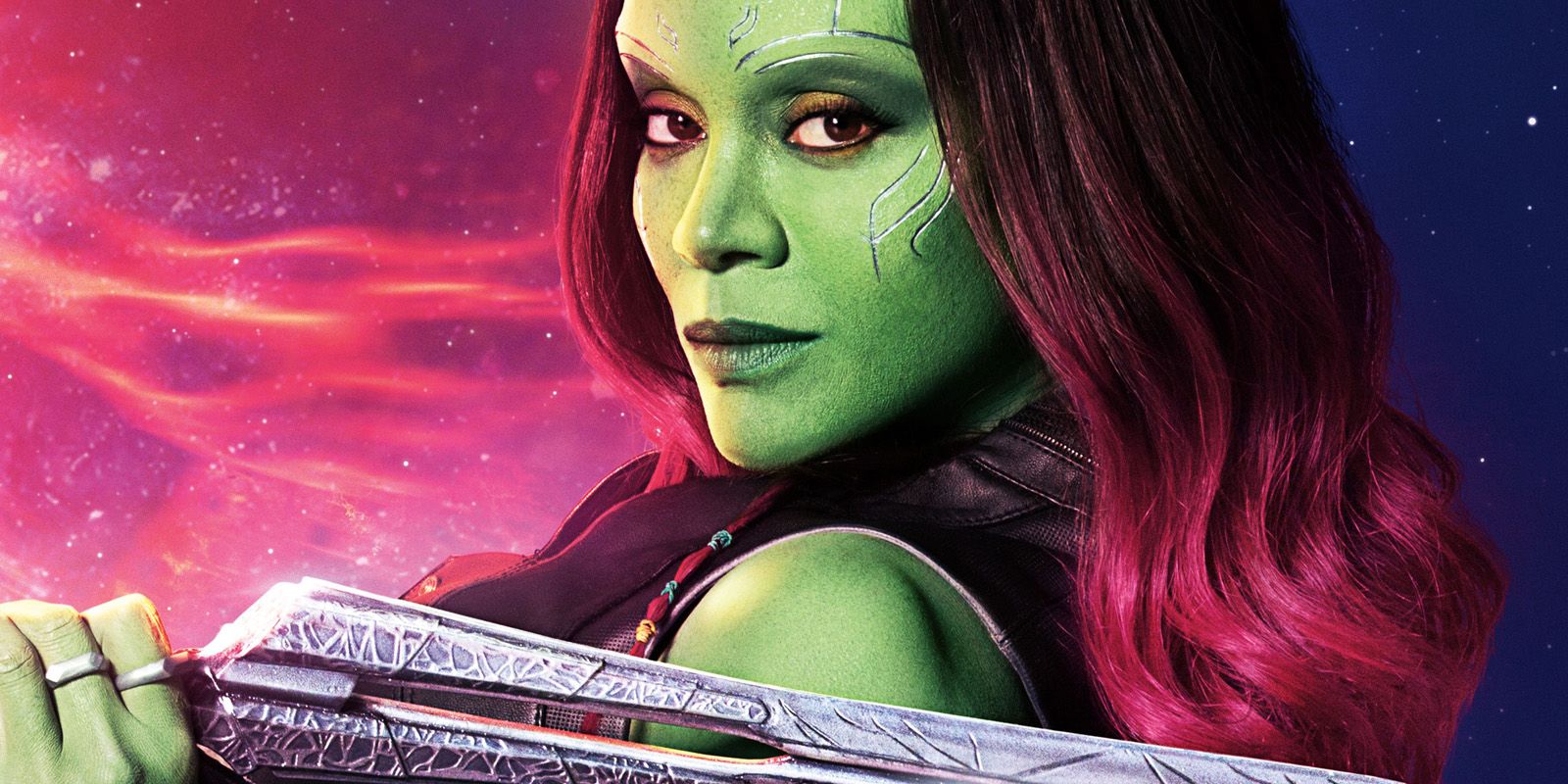 Zoe Saldana as Gamora in Guardian of Galaxy

Being passionate about acting she moved back to New York after she graduated from high school. She played a major role in one of the famous plays by the popular theatre group named FACES in 1995 in Brooklyn. Being a part of the theatrical group she did many more plays. Her plays were mostly based on issues of the society mainly on dealing with substance abuse and adolescent sexuality. Other than being a part of the popular group FACES she was also a part of the New York Youth Theatre Group. The way she drew the role of a major character in the popular play named Joseph and the Technical Dreamcoat did not fail to catch the eye of the audience as well as the critics. After her performance in the drama, she was selected by a popular talent agency. With time her acting skills improve and she made her debut on the small screen with a great episode of the popular television show named Law &Order.

With being such an awesome ballet dancer as well as having a great passion for acting, it was never tough for her to impress the critics and the talent scouts. Shortly she joined the big-screen. Her debut movie was Center Stage. In that movie, she played the role of a character named Eva Rodriguez who resembled her in the field of dance is the character was a talented and determined ballet dancer. The film was premiered in 2000. After this movie, she got many offers for doing both supporting as well as major roles. She appeared in the movie named Get Over it! which was based on a teen comedy. She also played a role in the movie named Crossroads which was directed by none other than but famous director Britney Spears. Other than these two movies she also drew the role of a character in the popular hip-hop-thriller movie named Snipes. In the meantime, during the mid of 2000s, she was offered many roles which were both commercials as well as Idie. She also continued her role in the Television show named Law and Order: Special Victims Unit and Six Degrees

In the following year that is in 2005, she was a part of the movie named Guess Who. The movie was a successful adaptation of the old movie by Sidney Poitier and Spencer Tracy named Guess Who’s Coming to Dinner. In the older version of the movie, the roles were a bit racial so in the new version, it was switched with Bernie Mac who drew the role of the character Saldana’s Afro-American father, and Ashton Kutcher who was his white fiance. She did other movies as well namely Constellation and Dirty Deeds. Other than her lead role in the movie Guess Who she also drew the lead role in the movie named Premium. In this movie, she played the role of the character whose love interest was Dorian Missick. Other than that she was a part of the thriller movie released in 2008 named Vantage Point.

With her great acting skills, she rose to stardom with the movie Star Trek and Avtar which were released in 2009. The movie Star Trek was directed by J.J. Abrams. In that movie, she played the role of the character named Uhura who by profession was a communications officer. In the other movie, that is in Avtar she played the role of the character named Neytiri, who was an alien warrior. This movie was under the genre of science fiction epic movies directed by James Cameron. With the graceful acting of the whole cast of Avtar, the movie became the highest-grossing film around the world. The way she portrayed the role in both the movie caught the eye of the critics and the talent hunters as well. Other than being a great actress in the film industry she also started appearing in different advertisements. Her first debut ad was in 2010 with Calvin Klein. She appeared in the add which was for the Envy range.

In the next installation of the Star Trek series, she redid the role of Uhura. The movie was named Star Trek Into Darkness which was premiered in 2013. In the next year, she played a major supporting role in the movie Guardian Of the Galaxy. Other than being a part of different movies she appeared in some television mini-series as well namely Rosemary’s Baby 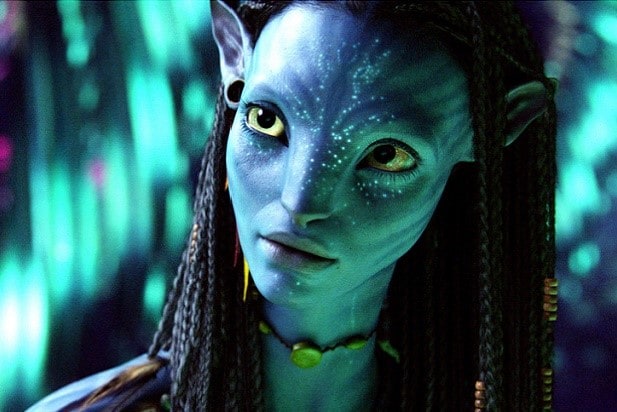 Zoe Saldana in the movie Avatar

Zoe Saldana has an awesome line of movies from the very start of her career. Other than that some of the upcoming projects that are to be done by her are namely Avtar 2 which will probably be released by 2022. Then comes the third and fourth installations of the Avtar series namely Avtar 3 which will be premiered by 2024 and Avtar 4 which will most probably be out by 2025. But according to the information before she starts doing the Avtar series she will play a major role in the movie named Suicide Squad 2  which is directed by James Gunn. This movie will be premiered by the month of August in 2021 itself. 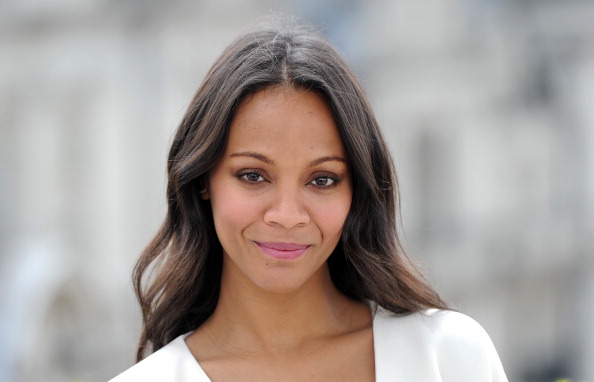 Other than being a great actress she is also a good businesswoman. She owns a range of restaurants. Other than that she also has her clothing and fragrance collection. She also has a brand of vodka. With being an awesome actress as well as a businesswoman her net worth is estimated to be somewhere around $275 million 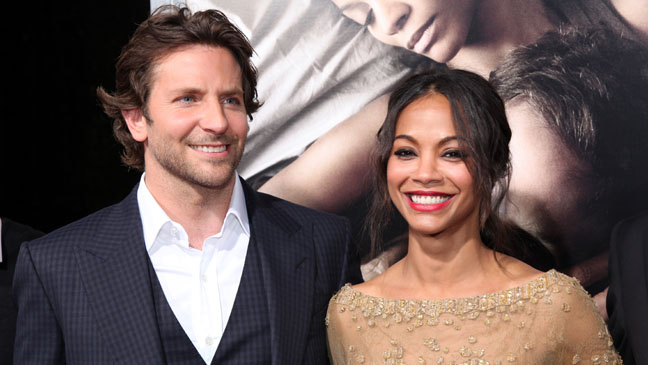 The popular star Zoe Saldana was in an open relationship with the CEO of the popular company name My Fashion Database who is also an actor named Keith Britton. They had 11year long relationship which they wanted to turn into a marriage. The couple has their engagement in 2010. But for some reason or the other, they split their ways in 2011. Within a few months that is in December of 2011, Saldana and the famous actor Bradley Cooper started dating. They were in a relationship for a couple of years that is till January 2013. Shortly they tied the knot in the month of June 2013. Within a year and a half that is in November 2014, they became parents of twin sons whom they named Bowie Ezio and Cy Aridio 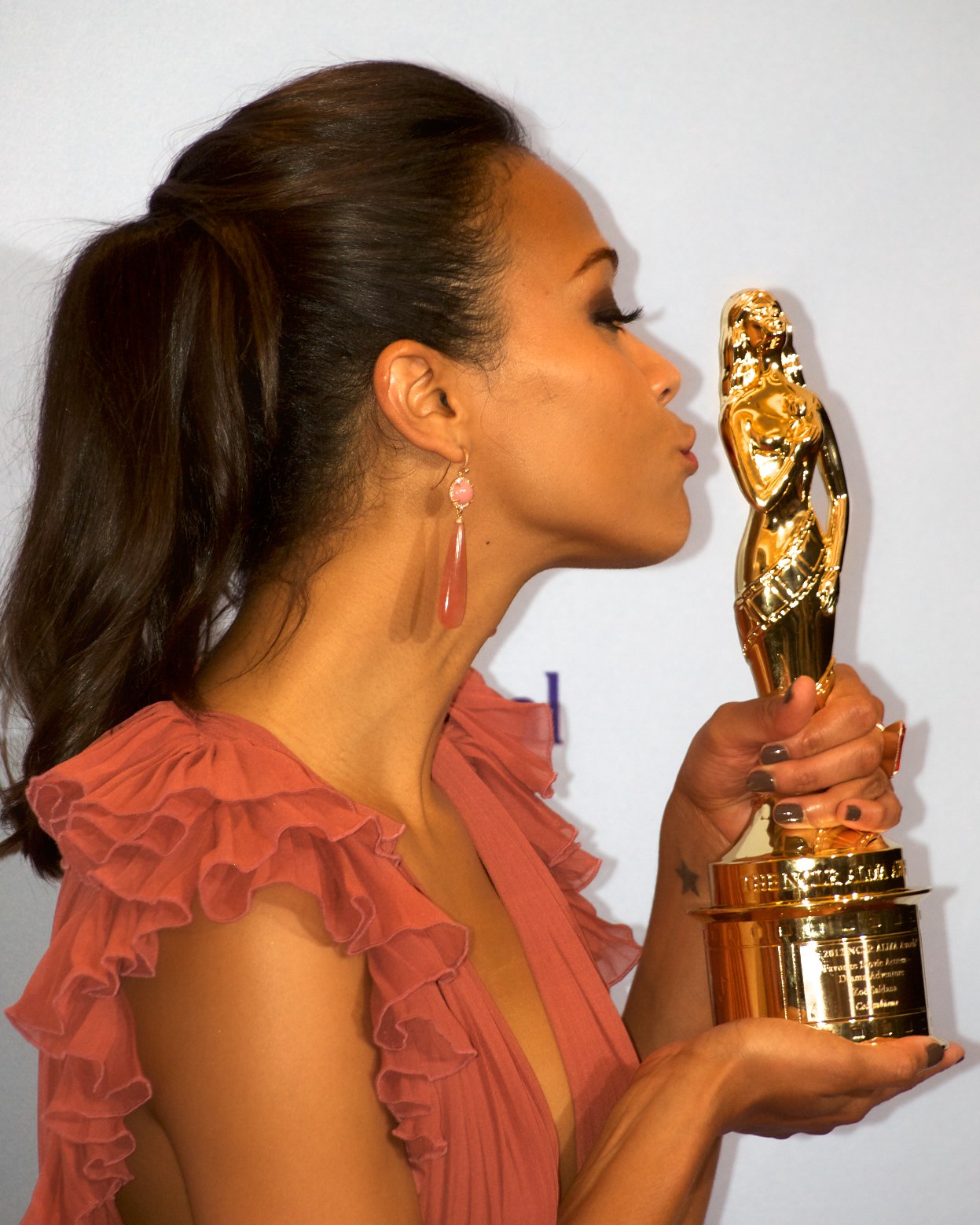 Being one of the most versatile as well as having the highest-grossing films to date the list of her awards is never-ending. She won her first-ever award in 2009 for the movie Star Trek, under the classification of Best Ensemble Cast. She was awarded the Boston Society of Film Critics Awards. In the following year, she won not only one but several awards which are, for James Cameron’s film Avatar she won the Best Actress award for her role of Neytiri. Other than this she also earned three other awards for the Avatar movie namely Saturn Award and the Empire Awards for being the best actress and the Teen Choice Award for the Choice Movie Actress. In that very year itself, she earned the Glamour Award for Film Actress. Other than her awards for the blockbuster Avatar movie, she also won the Teen Choice Award and the ALMA Award in 2012 for her movie named Colombiana. After a few years in 2017, she was awarded the Teen Choice Award for the movie named Guardian of Galaxy vol.2.

Also read:- 10 most powerful characters From the Guardian Of The Galaxy Universe In MCU