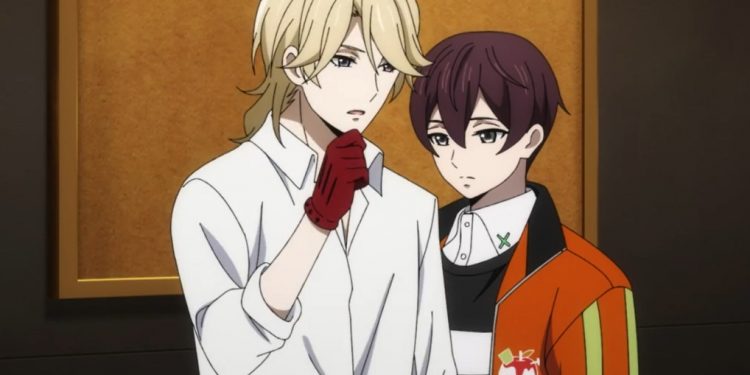 Visual Prison Episode 10 reveals Ange Yuki deciding to become a full vampire since he was a half-human vampire. Yuki practiced with Gil in the morning, who noticed that Yuki has improved in a few aspects. Gil saw a version of Yutaka within Yuki and realized that Yutak used to sing the way Yuki sang. In Visual Prison’s latest episode, Gil and Yuki went to the hall and decided to share drinks. Gil talks about the song they have finished recording and asks Yuki about its take. Yuki thinks that it is okay since Gil told him so earlier.

But Gil reminds Yuki that he has to decide since he is the Oz’s head. He reveals that he has learned that the recording is not completed until the leader is satisfied. Yuki reveals that it is good, but he is new to everything. Gil reminds Yuki that they are left with two and half a month until they do the next Visual Prison. Yuki feels that one of his parents is still alive since Carmelia mentioned it when she rampages. Gil is surprised to hear Yuki saying he wanted to be a 100% vampire.

Yuki adds that he wants to stay with Gil and everyone forever. Gil wonders if he is sure and advises him to think about it. He realizes that entering Eternity is not easy as Yuki images. Gil also tells Yuki about Robin and Eve. Yuki wonders if they will go separate ways in the future. Gil knows that everyone has their path, and no one has entered Visual Prison much time for centuries. He knows that if Carmelia were saying the truth, Yuki would live like a human even if he gained his complete form.

Yuki decides to think about it, and Gil says that he will tell him something soon. Later Yuki arrives at the bus stop and hears the voice of Dimitri and realizes that it is ECLIPSE. Hyde decides that they are joining Yuki since they are getting bored. The bus arrives, and the trio enters. On the way, Dimitri wonders where Yuki is going. Yuki reveals that he is visiting his home. He realizes that his parent issue has been bothering and he has to know about that. Dimitri also talked about the Japanese ritual called Obon.

During the Obon ritual, the Japanese pay respect to their ancestors. Yuki wonders if Hyde and Dimitri have known each other for a while. Hyde reveals that their friendship has happened ever since they were humans; Yuki was surprised to hear that Dimitri and Hyde are brothers. The bus driver wonders who the guy is screaming. Hyde adds that they became brothers when they turned into vampire brothers. They also talk about their parents, and Hyde reveals that they passed away when they were young. Hyde adds that he and Dimitri are immortal brothers, and they will remain young forever.

Yuki wonders if the two have ever thought of disbanding, but they both say no. Dimitri wonders if Yuki loves Gil that much. Yuki realizes that he has admired Gil ever since childhood since he loves the music that Gil uses to produce before he quits being an idol. Gil and Robin, and Eve travel together, and Gil reveals what Yuki told him in the morning. Dimitri, Hyde, and Yuki arrive at Yuki’s home. Yuki goes through the document and finds a picture of Guil and Yutaka. Dimitri and Hyde fail to reveal why Yutaka was with Gil.

Visual Prison Episode 10 will be released on 11 December 2021. Yuki reveals that Yutaka is his father, and Dimitri reveals that Yutaka was part of Gil’s soul. But Yuki can get more info from Gil since they know little about Yutaka’s death. The tri went to the river, and Guil decided to refresh his mind wondering why Guil didn’t tell him anything. Let’s look at Visual Prison Episode 10 official details.