The South Korean drama series ‘Youth’ based on the BTS Universe is going to be on the screens soon enough. 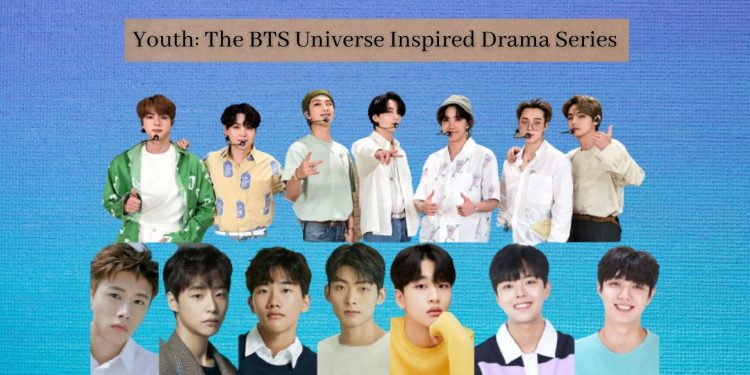 The South Korean drama series ‘Youth’ based on the BTS Universe is going to be on the screens soon enough. It is no surprise that the drama series has created such huge buzz on the internet and has bagged all the headlines of the internet. BTS is not only a name but a strong and stunning power that holds a lot of authority. Therefore, it is really obvious that why people around everywhere are greatly intrigued with this upcoming drama series.

Written by Kim Soo-jin and Choi Woo-Joo the drama series is going to be one great ride for everyone out there. It is not only going to be a kind of narration but also a great impact and inspiration for all the youth out there in the audience pool. Portraying the genres of music, life, friendship, youth, and drama, the series has successfully managed to steal the spotlight even before its release.

Moreover, it came in as anything but a surprise when all social media platforms were stacked up with the news about the creation of a drama series based on the life of 7 boys who are now ruling the world. The impact they have made on everyone out there can never be put into words. It is tantalizing, stunning, amazing, and really powerful. This upcoming drama series is going to make the same impact on every viewer out there.

Here we have summarized all the details about this upcoming series. Therefore, let’s have a look inside and find out everything about it.

‘Youth’: When is The Release Happening?

The drama series is going to release next year though there isn’t any specific release date for the same. There haven’t been any official announcements about the release date, so saying anything, for now, would be not safe. There are several assumptions going around the internet about the premiere of the upcoming drama series. Though, confirming any one of them will be useless as there is no authenticity in them.

Moreover, the announcement about the drama was made back on August 21, 2019, by Bang Si-hyuk. It was originally titled “Blue Sky” but later was changed to “Youth”. There hasn’t been any information about the number of episodes too. Therefore, for now, making any assumptions would be wrong. If there are any official announcements regarding the release date of the series, then we will keep you updated about the same.

‘Youth’: What is The Drama Series About?

The storyline of the series is going to be one of the most interesting and intriguing ones for everyone out there. Especially if you are a fan deeply in love with the amazing music tracks by BTS then this is going to be a real treat for you. So, buckle up and keep your calendars marked.

The drama series is going to narrate and expand the storyline fans have seen throughout BTS’s music videos and the Save Me webtoon. The story will begin with Seok-jin, who meets the other six boys. Together they understand that everyone is dealing with their own problems and issues, and therefore they become each other’s anchors and learn to overcome their greatest difficulties.

It will be really great to see the life story of all our precious seven boys and the whole process they have to go through for reaching the pedestal they are on today.

‘Youth’: All About the Cast

Born on April 25, 1997, Seo Ji-hoon is a popular South Korean actor. He is known for his perfect and engaging screen presence and debuted with the 2016’s drama series titled “Signal”. His debut was quite a success which earned him instant recognition in the industry.

For his one-act drama “The Legendary Shuttle,” he received his first KBS Drama Award nomination. Then in the year 2017, he appeared in the teen drama “School 2017” and another popular black comedy-drama series “Prison Playbook”. Last year, he bagged the KBS Drama Award for his characters in the drama series “Welcome” and “Men Are Men”.

The South Korean actor made his debut through “Because This Is My First Life” which was a romantic-comedy released back in 2017. He earned constant recognition and his character in the drama series “Life on Mars” got him into the spotlight.

Last year, he appeared in the drama series titled “Blackout” and also made his big-screen debut through the movie “A Mathematician in Wonderland”.

The South Korean actor has been starred in some of the popular and successful Korean movies and drama series. In the year 2016, he played the role of Sang-Chul in 2016’s movie “Vanishing Time: A Boy Who Returned”, which became quite a success.

Later, he was starred in movies like “The Princess and the Matchmaker”, “Inseparable Bros”, “The House of Us”, and “A Boy and Sungreen”. Moreover, he has also appeared in drama series like “Nobody Knows”, “Move to Heaven”, “The Veil”, and now “Youth”.

He has been starred in many popular movies like “A Frozen Flower”, “The Thieves”, “The Age of Shadows”, “Juvenile Offender” and many others. Moreover, he has been also starred in many television series like “Hero”, “Listen to My Heart”, “Fashion King”, “Beautiful World”, and “Nobody Knows”.

Kim Yoon-woo is one of the new faces in the cast lineup. He is going to play the role of Park Ji-min, a boy who hides thousand of pain and secrets behind his bright smile. Struggling to find his sense of identity, his life is decorated with lies. It would be great to see a new face bringing up and acting such an important character.

He is one of the quite recognized South Korean actors and is known for making an appearance in some of the movies and drama series.

He has been starred in dramas like Aquaman and Sometoon 2020. He was also seen in the 2018’s movie “Marionette”.

The 15-year-old South Korean actor rose to popularity and the spotlight as a child actor. He is best known for his characters in drama series like “Graceful Family” and “The World of the Married”.

ALSO READ: BTS Members Are Taking Over Instagram: Everything to Know

January 2022 Kdramas You Should Add To Your Watchlist Now