Sheldon once saw Missy getting nervous and that notion of nervousness had made its home inside his mind in Young Sheldon Season 5 Episode 9. 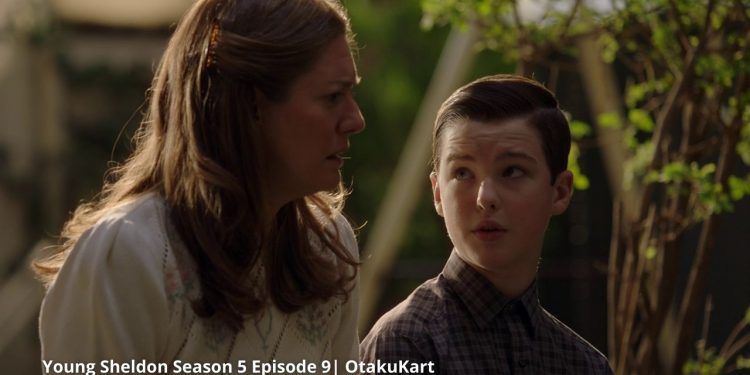 Young Sheldon Season 5 Episode 9 says Sheldon might find himself underconfident in his very own best thing. That is science. A day he probably never saw coming. It is probably his own fault as he saw someone else getting nervous. The same thought of nervousness may continue to grow in his mind throughout the episode. Thus resulting in him failing at his best attribute. Before we move to the same, Sheldon recently put up a fight with President Hagemeyer that saw one of the science’s greats coming to aid him towards the end of the episode.

So, Sheldon has been trying to get inside the East Texas Tech faculty meeting for a while. Every time he tries, he fails, with Dr. Grant managing to catch him. Things took a turn when he found out that there was a chance that there would be a cut in science equipment, especially at a school that needs it the most at his point. Thus he took the same thought to President Hagermeyer, but she had a different plan in her mind. Instead of listening to him. she decided to ignore him by lying. It was a matter of time that Sheldon found out, and here is what went down.

Previously on Young Sheldon Season 5, we opened up with Sheldon trying to invade East Texas Tech’s faculty meetings, at the same time grilling Dr. Grant for information on what went down in the meeting. When nothing came of no use, Sheldon instead took his concerns about the cutting of science equipment to President Hagemeyer. She promised that she would take it to her senior, a so-called Grand Chancellor.

Mary was pretty happy to see that Georgie was serious about running a laundromat with Meemaw. Things went sideways when she found out that there was a gambling den behind it. Also, the fact that Georgie knows about all of this. As this went on, Sheldon planned to take help from some big names for the cause he and President Hagemeyer are working on. He wrote letters to some big names in science while he also ran a petition.

Sheldon’s next part for the cause was writing a piece about it that could go on the front page of Campus Newspaper. He requested the editor as well, but his exclusive was rejected. Sheldon blamed things on Grand Chancellor, an entity that doesn’t exist. The editor told Sheldon that President Hagemeyer is the boss, and she made Grand Chancellor up. Meanwhile, Mary questioned George Sr. and also confronted Georgie about the gambling den.

After looking at Georgie, Mary felt she failed as a mother, but Pastor Jeff comforted her. George Sr. taught his son a major lesson about lying. He believed everyone lies, but it was only his mother he believed in by the end of the episode. He also that she is not failing as a mother, and he told her that. George Sr. on his side went to visit Georgie, and he was okay with him working there. The episode closed with Stephen Hawking calling President Hagemeyer to question her about Sheldon’s letter he received.

Young Sheldon Season 5 Episode 9 is releasing on 9 December 2021. It is titled “The Yips and an Oddly Hypnotic Bohemian.” The official synopsis of the episode suggests that Sheldon may get a science yips and will be overthinking about it a lot. He saw Missy getting nervous about a baseball throw. The same nervousness got stuck in his mind resulting in him not being able to concentrate on his studies. George Sr., on his side, will spend time playing Handyman at Brenda Sparks’ house. Check out the official trailer for Young Sheldon Season 5 Episode 9.

Also Read: Why Did Sheldon And Amy Break Up? All About The BBT Genius Couple