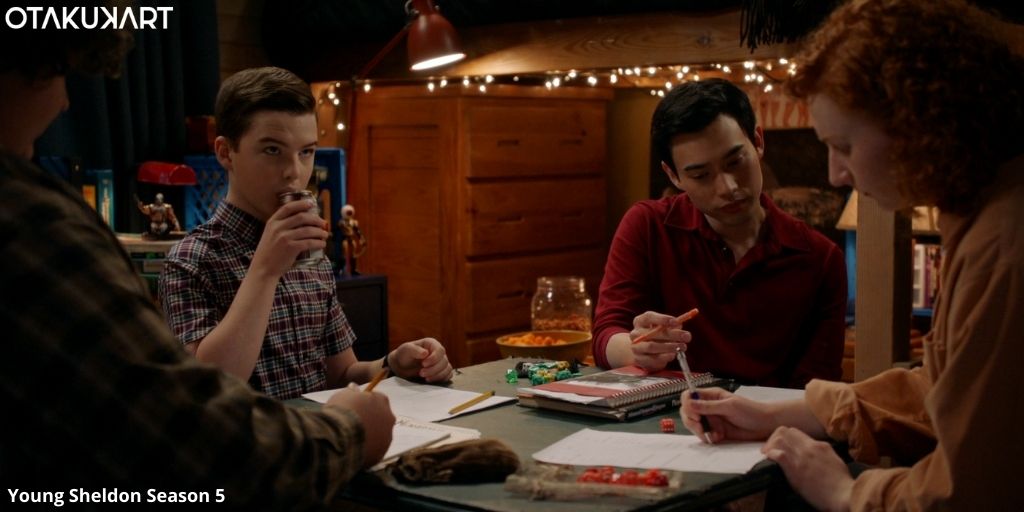 The fans and viewers are eagerly looking forward to the release of Young Sheldon Season 5 Episode 14 to find out what happens next. While the previous episode gave us a look at a major moment in Sheldon’s life as he grows up. We saw Sheldon finding it hard to understand the reason behind college students’ obsession with playing loud rock music in their dorm rooms. Furthermore, the music acted as a major disturbance in his study schedule.

On the other side, we saw Mary not allowing Missy to wear short skirts to school which Missy did not like. Although, she managed to sneak in her short clothes to school to get changed in them. However, it did not go well for her at school after wearing those short skirts. Meanwhile, George faced a lot of heat from the Boosters at his school since their children’s team did not perform well at the tournament.

While Sheldon got permission to spend his night at the dorm for the first time which didn’t end well for him. The ongoing sitcom has been dominating the comedy genre once again with its fifth season. But the fans are now eager to watch Young Sheldon Season 5 Episode 14. However, before talking about that, let us find out what exactly happened in the previous episode.

Episode 13 of Young Sheldon Season 5 dropped on 27th January 2022, titled “A Lot Of Band-Aids And The Cooper Surrender”. The episode began with Sheldon at his dorm room studying and getting distracted by constant loud rock music from the next door. So he decided to go and complain about the noise to the boys named Darren and Oscar. However, when Sheldon learned that they shared the same interest as him in video games, he went to play with them. On the other hand, we saw Meemaw buying a dress for Missy that Mary was not ready to buy because it was too short for school. Meanwhile, at George’s school, the principal called him in to inform him that the Boosters were not happy about how he was coaching the kids’ team.

Eventually, he had to talk to the Boosters to calm them down and Wayne agreed to go with him to the meeting. At college, Sheldon’s dorm neighbors were ordering Chinese food which he had never eaten, so he asked Mary to let him stay there for a little late. But she denied him as she didn’t know who these new friends of Sheldon were. The next day at home, George was frustrated and kept getting angry over small things. Meanwhile, wearing a short skirt at school turned a nightmare for Missy when the girls teased her about the hair on her legs. Eventually, she tried to shave it on dry legs and got several cuts. At last, she went to Meemaw for help who put several band-aids on her cuts. At school, George and Wayne met the Boosters who blamed George for the team’s poor performance.

While at college, Darren asked Sheldon to come in at 7 pm for a game night. But he told Darren that his mom wouldn’t let him stay after 6 pm. However, Sheldon called at home and tried to get permission for spending the night at the dorm. Surprisingly, George allowed him as he was already frustrated and didn’t want to go to pick up Sheldon. Whereas, Mary got furious that George didn’t care about their son. Although, she felt sad for George when he told him that his job might be at risk. On the other hand, Sheldon had a great time but he drank too much root beer and ate a lot. This caused his stomach to hurt and his new friends had to carry him to his room. While Mary arrive there as well and freaked out seeing Sheldon’s condition.

Young Sheldon Season 5 Episode 14: When Will It Release?

It looks like the CBS television network is putting a short break on the show like others until the Winter Olympics are finally over. That is why “Young Sheldon Season 5 Episode 14 does not have a confirmed release date as of now”. However, we can expect the show to return sometime near the end of February or in early March this year.

“Young Sheldon Season 5 airs on CBS every Thursday at 8 pm ET in the United States.” While the latest episodes also stream on Paramount+. Additionally, the show is available to watch on Amazon Prime Video and Youtube TV. The show airs every Thursday at 7:30 pm on CTV in Canada. Meanwhile, the viewers in New Zealand can watch the show on TVNZ. Whereas, the first four seasons are available on Binge in Australia.

Also Read: How I Met Your Father Season 1 Episode 4: Has Sophie Finally Found Her Soulmate?