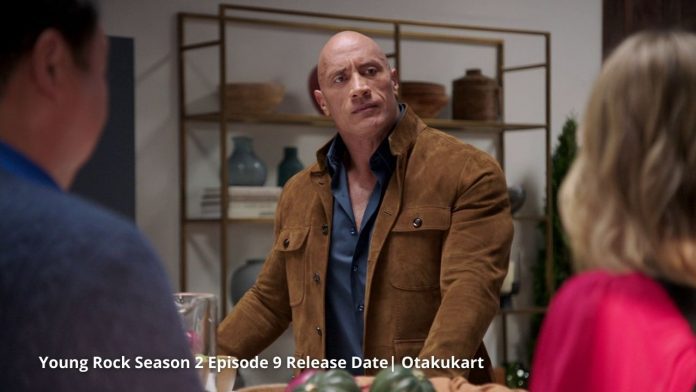 Young Rock Season 2 Episode 9 picks up the story in 1984 again, with the tension between Rocky and Tony Atlas rising while Lia’s extortion case continues. Before we move to that, recently, the show took us to 1996, the time when The Rock made his official wrestling debut, that too amidst some legendary wrestlers of that time.

The Rock tried to learn everything from legends like Steve Austin, Hunter Hearts Hemsley, and Undertaker. He managed to get over with the crowd, but Vince still felt he was not ready. But the Rock saw the picture on the bright side as he went to Jerry Lawler’s promotion and similarly aims to follow for his Presidential elections that are just days away now. So let’s find out what the coming ninth episode of Young Rock Season 2 has in its store.

Young Rock Season 2 Episode 9 will release on 10 May 2022. It is titled “Backyard Brawl-B-Q”. The official synopsis of the Episode suggests we are going back to Hawaii in 1984 for the Brawl-B-Q day.

Rocky Johnson and Tony Atlas’ impressive partnership might be coming to its end as the relationship reaches its breaking point. Young Dewey, after getting heartbroken by a girl in the previous Episode, may become more than one girl’s crush. Lastly, the court may come to a conclusion regarding Lia’s extortion case.

Young Rock Season 2 Episode 9 is airing on NBC at around 8 pm ET in the US and on CityTV in Canada at the same time. BINGE will serve as a home for the Young Rock S02 E09 in Australia.

Check out the official trailer for Young Rock S02 below.