Young Ro, with the guilt of hiding Soo Ho, will be making a major step to help her fellow university students! 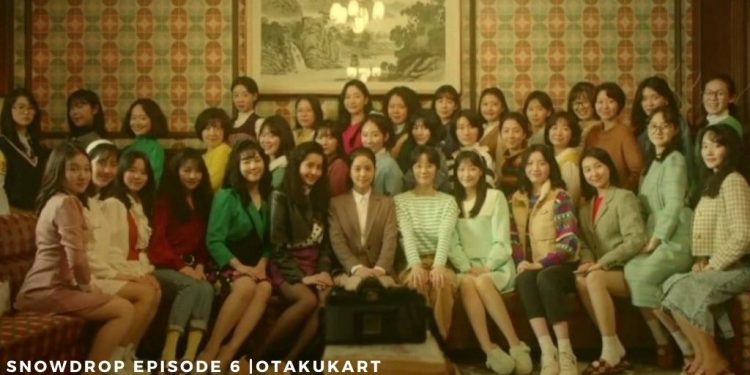 Snowdrop Episode 6 is just a few days away! In just three episodes, Young Ro and Soo Ho’s world have completely turned upside down. No one can deny that the last three episodes have been one hell of a rollercoaster ride. Snowdrop had started out as a typical romance story in very dangerous circumstances. From Young Ro innocently falling in love with Soo Ho at first sight to her suddenly helping him hide from the ANSP, it shows that the character Young Ro had been too naive. She herself realizes this when Soo Ho, along with his comrades, held her and her fellow university students hostages. You could see how heartbroken and how she was in disbelief that she persuaded her roommates to hide a North Korean spy and partly is responsible for putting the lives of all the students in danger. Along with the tragic love story of the leads, a lot of scheming has been going on.

The leading party members Nam Tae Il and Eun Chang Su had struck a deal with North Korea to secure their position as the ruling party of South Korea. However, they have been in a tight spot recently know that the North Korean spies have held the students hostage. Soo Ho ended up inside Hose Woman University’s dormitory again. Furthermore, people have been saying that Jung Hae In‘s expressions are bland. We would politely debunk all of these claims. Considering that Soo Ho’s mind is in conflict about escaping South Korea safely and having feelings for Young Ro, Jung Hae In’s expressions have been on-point. Even though he was going to escape in the last episode, it seems that he couldn’t and will stay longer in the dormitory in Episode 6 of Snowdrop.

Snowdrop Episode 6 will be released on January 1, this Saturday. You can start this year with a thrilling watch with Snowdrop. Moreover, Snowdrop airs new episodes every Saturday and Sunday at 11:30 PM KST on its broadcasting channel. There had been a change in schedule regarding the release date of this episode as JTBC had decided to release three episodes, i.e., Episodes 3, 4, and 5, last week to clear the fog of controversy surrounding the k-series. Naturally, fans thought they would be getting only one episode, but to their relief, they will be getting two episodes this week as usual. Gear up for two more fun-filled episodes of Snowdrop this week!

Where To Watch Snowdrop Episode 6?

The Korean audience of the kdrama can watch the episode on JTBC every Saturday and Sunday at 11:30 PM KST. In addition to that, the international viewers of Snowdrop can watch Episode 6 of the k-series on Disney+. Unfortunately, the service is only limited to countries like Malaysia, Indonesia, Thailand, Hong Kong, Singapore, Australia, New Zealand, and of course, South Korea has access to the drama. Plus, you can be right on time to watch the episode 6th episode with our help! The release time of the episode is 7:00 PM in India, 8:30 in the United States, 1:30 PM in the United Kingdom, 12:30 AM in Australia, and 8:30 AM in Canada.

Predictions For The Upcoming Episode

Snowdrop episode 6 will surely throw the audience off their seats! Through the preview, the audience got to know that the political leaders had planned to save Young Ro because she is Eun Chang Su’s daughter. Plus, they even theorize that Soo Ho must have made a deal with these leaders so that he could get first aid for his comrade Lee Eung Cheol who got hurt while escaping. But things won’t go as planned when the other students start protesting and shouting why Young Ro is getting to escape, Kye Bun Ok added fuel to the fire by saying that she had started this mess but is getting to escape either way. This made Young Ro shout in agony that’s she wouldn’t be leaving her friends alone. This made Soo Ho point a gun straight at Young Ro’s head. All of this is very tense!

Fans also predict that Mrs. Pi, the cafeteria lady, and Yoo In Na’s character Kang Chang Ya are showing lesser than what they are. What we mean is that these characters have been hiding something very big. Also, many think that Kang Chang Ya and Mrs. Pi could be North Korean spies. Other than that, Nam Tae Il has sent Kang Chang Ya to the dorm for a reason. He has instructed her to kill the North Korean spies. Additionally, do you remember the picture that Young Ro and her friends had taken when she was about to leave the university? Fans speculate that the 13 girls sitting at the front will die and that Young Ro’s stepmother will have a hand in it! Don’t miss out on the episode to see what happens next.