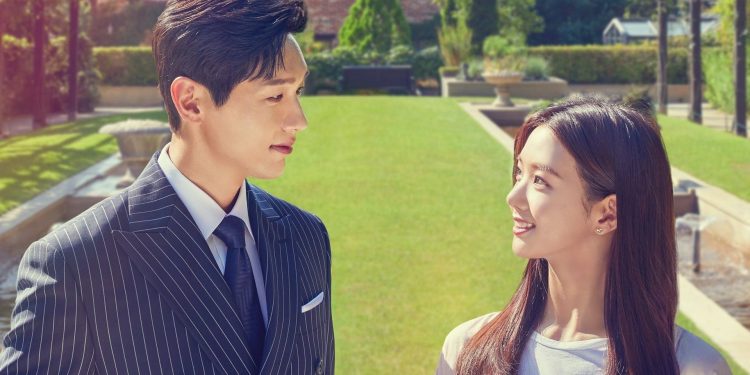 ‘Young Lady & The Gentleman’ Episode 21 is coming out this weekend, and Sa Ra’s heart is broken once again. With Young Guk having no recollection of his memories, he was all set to marry Sa Ra on Christmas eve. But some past events and realizations made him doubt his decisions. Playing with the kids, as he went on to hide with Dan Dan. Looking at her so close, his heart started pounding, and he left to rest. Telling Sa Ra that there might be something wrong with his heart as it started pounding when he was near Dan Dan. Sa Ra got a bit insecure as they went to the hospital together. Where they found out everything was fine, and it probably happened because of excitement.

Looking at Dan Dan and Young Guk together, Sa Ra told her not to talk to Young Guk straightaway. And bring all the matters to her first. Talking to Young Guk, she suggested letting Dan Dan travel from her own house as she is back. But Young Guk denied it and told her how the kids wouldn’t let Dan Dan go away. Going to the kids, he went on to ask them if Sa Ra could stay take care of them instead of Dan Dan. But the kids just refused straight away. Taking their opinions, Young Guk told Sa Ra that Dan Dan would be staying as the live-in tutor. But Sa Ra told him she just wanted to get close to the children since the wedding was getting closer.

Sa Ra & Dan Dan Get In A Fight Over Kids

Looking at him not being able to stand up to his kids, Sa Ra was angry. Soon she got confronted by Se Chen about wanting to ick Dan Dan out. He went on to tell her how important Dan Dan is for them and that she should not mess with her. While Se Chan was having a proud moment being able to make a robot by himself. Se Jong tried to hold it and broke it accidentally. As Se Jong started crying because of his mistake, his brother pushed him on the sofa and started screaming at him. Looking at the ‘fight,’ Sa Ra ran to rescue Se Jong, scolding Se Chan for hitting his little brother over petty things.

As Se Chan went on to defend himself, saying Se Jong started it, she just scolded him more and called him stupid. Soon enough, Dan Dan arrived at the scene, and Sa Ra started scolding her too. Se Jong told Sa Ra that it was indeed his fault as he told him not to touch it. But Sa Ra told him not to lower his head and that he didn’t need to apologize to anyone. As Sa Ra and Dan Dan met in the hall, Dan Dan told her to see Se Chan as she screamed at him before. But Sa Ra just got angrier and told her that Se Chan physically assaulted him and he should be punished. Warning her that she would hold her responsible too, Sa Ra left Dan Dan alone.

The next afternoon, Se Jong and Se Chan were playing outside when both of them slipped. Sa Ra ran to them, blaming Se Chan for hurting Se Jong and started hitting and warning him. But Se Jong told Sa Ra to stop scolding his brother as he fell by himself. As she took Se Jong away, Dan Dan comforted Se Chan while he complained about Sa Ra always hating him. Dan Dan went on to confront Sa Ra. Telling Dan Dan that she is the future wife of Young Guk Sa Ra told her that she needs to discipline the children. As they were fighting, Young Guk came in between, asking what was happening.

As he asked Dan Dan about what happened, Sa Ra tried to stop them. Dan Dan explained the situation and how Sa Ra went on to scold Se Chan for not letting both brothers explain what happened. Young Guk went on to talk to Se Chan, and he told him everything. After Young Guk told Sa Ra not to hit kids at any cost, she drove away from the house. As she went to sit in a restaurant, Cha Gun spotted her through the window. As he went in to join her, she refused to recognize him. While he apologized to offend her, she told him that she is getting married soon and asked him not to recognize her anymore.

But after having a fight with Young Guk and having nobody to talk to. Cha Gun was the only one she could turn to. Going to drink again, she ended up calling Cha Gun. Asking him to take her home, she called him to the restaurant she was at. Reaching there on time, he saved her from falling. Dropping her home, he told her not to drink anymore. But she just went on to hug him and paid him for the service. Going in, she was sulking that Young Guk thought of her as an older woman. But she still doesn’t wanna let go and wants to become the lady of the house.

Young Lady & The Gentleman Episode 21 Release Date & What To Expect?

Young Lady & The Gentleman Episode 21 will release on December 4, 2021. In the upcoming episode, Young Guk has to make it clear that he wants to be treated like a 21-year old. Telling his kids that they should treat him like their older brother. He doesn’t want anyone to force old memories on him. But having a beer and an accidental kiss with Dan Dan, it might not take much time for his memory to come back to him. Anna is trying to get her family back. Getting her old hair color back and asked Soo Cheol to help her. While Soo Cheol is receiving a better employment option. Not being a regular employee, Soo Cheol ended up losing his job. So he decided to say goodbye to Anna on his last day and thanked her for the scarf.

She was happy that even for some time, she was able to see how her family was doing. While Yeon Sil reached his office with some lunch when she got to know Soo Cheol got fired. Running back home, she asked him to stand up for himself. But he just left the room, not wanting to start another fight. As he went out to submit his resume looking out for work, he met a close friend on the road. As they sat down to talk when his friend asked him to take over his restaurant.

But the restaurant building has a new owner now. And the owner is no other than Ki Ja. Looking at the heavy rain on TV, Ki Ja thought about the gold brick she hid in the pit. Picking up everything, she went to sell the gold bricks and the ring. Selling everything she stole from Dae Ran, Ki Ja had all the money spread on her bed. Thinking about what to do with the money, she went to look for properties to invest in. And ended up buying the chicken restaurant in the market.

Where To Watch ‘Young Lady and The Gentleman’ Episode 21?

‘Young Lady and The Gentleman’ Episode 21 will be available to watch on channel KBS on cable TV. For the global premiere, streaming services like Viu and Rakuten Viki are available with subtitles. The Youtube channel for KBS World also has BTS and re-runs of the show.

Also Read: ‘Now, We Are Breaking Up’ Episode 7: Jae Kook & Young Eun Getting Close As She Overcame Her Work Problems