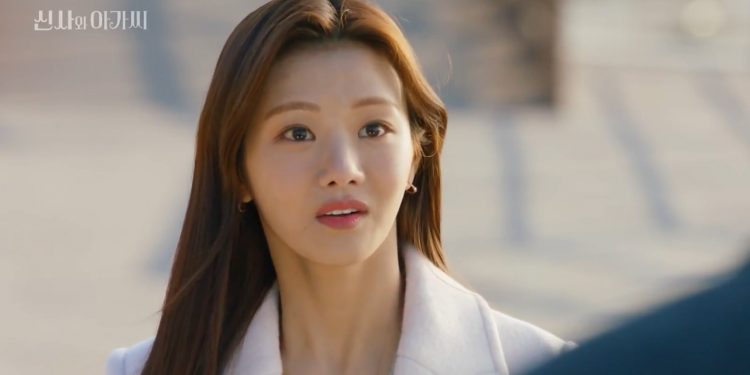 ‘Young Lady and Gentleman’ Episode 33 is coming out this weekend. And after all the confrontations, Soo Cheol decided that he won’t be going to the States with Anna. While the two were having a quite nice time together. And even asked Dan Dan to join them. With Mi Sook getting to know about Dan Dan’s birth mother. And Yeon Sil told her how she kept herself down for the sake of Dan Dan. Soo Cheol decided to stay with his family. But still determined to take Soo Cheol and Dan Dan with her, Anna went straight to Yeon Sil. Knowing that hearing about the high salary, Yeon Sil would do anything to send Soo Cheol to the States.

Having no idea about Anna’s determination, Soo Cheol went on to ask her. As Anna told him about her feelings, Soo Cheol just told her that she’s trying to buy his affection by offering money to Yeon Sil. Looking at Anna’s nape reminded Soo Cheol of his ex-wife. Taking a look back at the past events and how similar Anna and his ex-wife Kim Ji Young seemed. He could not believe anything he was seeing and ran away from her house. Visiting Anna’s office when she wasn’t around and looking at the pictures she had of Dan Dan. And how comfortable she felt around them, he realized that Anna Kim is no one else but his ex-wife Kim Ji Young.

As the truth was out, Mi Sook wants to know about the family. Meeting Dan Dan, she asked her about her birth mother. But not knowing about what happened, the only thing Dan Dan knows is that her mother passed away. Running straight to her brother, Mi-Sook asked Soo Cheol if he had an affair with Yeon Sil. As she was screaming at him, Yeon Sil came to his rescue telling her that Dan Dan’s birth mother abandoned the family.

Hearing so many different stories, Mi-Sook was having a hard time processing everything. Sitting together as the family solved the misunderstandings, Soo Cheol came back home to see Dan Dan wasn’t there. Finding Dan Dan outside Young Guk’s house, he asked her to come home. But Dan Dan just cried asking him to tell him things about her mother.

Hearing whatever happened with Sa Ra, Dae Ran felt guilty and went on to apologize to her. But still not wanting to give up on Young Guk, Sa Ra wants to try something new. Looking at Sa Ra doing stupid things, Ki Ja suggested if they should move to another country and start over. But Sa Ra doesn’t wanna let go. Meeting Se Chan on-road she apologized to him for locking him that day and asked him to talk to his father. But Se Chan wasn’t a bit interested in helping her. Going to Young Guk, she apologized to him about Se Chan too but Young Guk told him that everything was over. And told him to not come to see him anymore. Left alone in the parking, Cha Gun came to help her and asked why would she beg him to stay.

‘Young Lady and Gentleman’ Episode 33 will release on January 15, 2022. As the two went for some dinner, Sa Ra got drunk and rambled about her getting fired and engagement getting off. Cha Gun keeps telling her to move on and asking her to start over with him instead. While Sa Ra is overwhelmed with the support and alcohol, she might be thinking of letting her problems go and start over. On the other side, from an old neighbor, Dan Dan got to know that his mother is alive. While she’s asking Anna to help her find her mother, Yeon Sil is asking Soo Cheol to come clean to his daughter about her real mother.

‘Young Lady and Gentleman’ Episode 33 will be available to watch on the streaming platform ‘Rakuten Viki’ and Channel KBS2.