Ji Na is finally caught as a CCTV footage of her stealing Si An's assignment is secured. Also, Yoon Soo is gathering proof against Principal Noh. 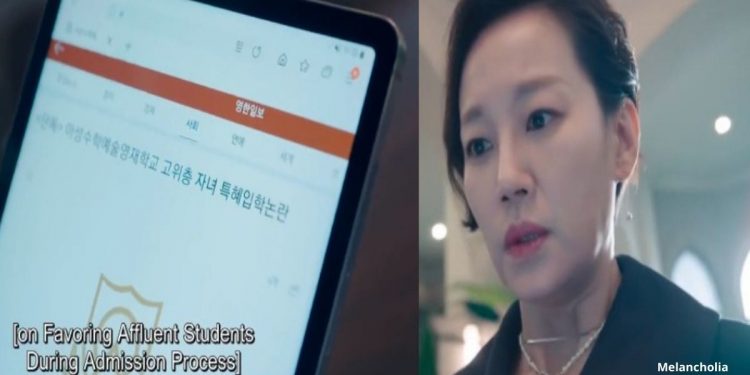 The South Korean drama ‘Melancholia’ is in its second phase, and now it’s Yoon Soo’s turn to take her revenge. Seung Yoo wants to help her take her revenge, but she doesn’t want him to get involved with her life again. Even though Yoon Soo wants a simple and discreet life her plans might reveal her new identity. Also, the education office is going is taking interest in Ahsung high because of the mathematics presentation controversy. ‘Melancholia’ Episode 13 is going to be a big turnover for Yoon Soo and Seung Yoo’s relationship.

Ji Na is going to have a meeting with Yoon Soo, but she does not know her past with Ahsung high. Also, Principal Noh finds out that the instructor of the private academy also knows about the controversy and wants Ahsung high to take a stand for Choi Si An. Because of this, Ji Na is kicked out of the mathematics museum project. Let’s find out what happened in the previous episode.

Till now, we have seen that Choi Si An and Kim Ji Na are under suspicion of cheating. When Yoon Soo finds out about this, she is infuriated and decides to take matters into her own hands. In the process of doing so, she decides to accept Ji Na’s admission to her academy, but before that, she wants to meet her and her mother. Later an awkward encounter among Seung Yoo, Yoon Soo, and Sung Jae turns out to be a big deal. Sung Jae follows Seung Yoo and stops him in the middle of the road. All he wants to do is make Seung Yoo realize that him being in Yoon Soo’s life is not gonna turn out well. Even so, Seung Yoo does not listen to him.

After Yoon Soo has compiled all the recordings of Principal Noh and the manager, she decides to send the recording to the Ministry of Education. The next day at school, Principal Noh calls Seung Yoo to her office. They find CCTV footage of Ji Na stealing the presentation while Si An leaves the laptop unattended. Watching this, Seung Yoo decides to kick Ji Na off his project. Later, Principal Noh’s manager enters hastily to inform her that the Ministry of Education has called because of the mathematics and art controversy, and the school is in trouble for favoring influential students for admission. Will the school go down for its wrong deeds?

Yoon Soo refuses to take Seung Yoo’s help in taking her revenge on Ahsung High. Later, Seung Yoo visits a school friend’s house warming party. As everyone enjoys a nice dinner, he tries to get along with Ye Rin. But we can see that Seung Yoo has an alternative motive. Also, he confronts Ye Rin about the photo she took at Jeju Island’s airport in the past. Other than this, Seung Yoo’s mom sees Principal Noh and Ye Rin’s father together outside a wine shop. At the academy, Ms. Ji finally meets Ji Na, and she could see that she has no interest in studying. Will Principal Noh find out that Ms. Ji is the instructor at the academy?

‘Melancholia’ Episode 13 release date is 22nd December 2021. In the upcoming episode, we will see Ms. Ji threatening Ji Na with the video of her stealing Si An’s assignment. Also, the education office will launch an investigation against Ahsung high school, which will lead Principal Noh into doing something illegal. Furthermore, she is more cautious as she is sure that Ms. Ji has returned.

Where To Watch ‘Melancholia’ Episode 13?

The ‘Melancholia’ is a television drama broadcast by the tvN network. People living in South Korea can watch the upcoming episodes of the drama every Wednesday and Thursday. As for international fans, the subscription websites WeTv and Rakuten Viki are available to stream ‘Melancholia’ Episode 13.

A Surprise Guest To Arrive In Dickinson Season 3 Episode 10