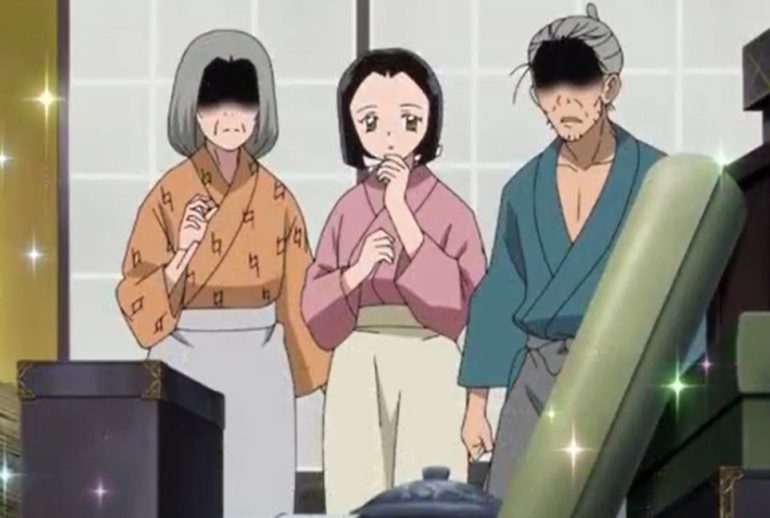 The One Behind the Forest Fire

On a snow island, a lady was running away from something and she collapses in front of an unknown man. She asks the man to save her even though she doesn’t know her. In the morning the trio was walking together. Moroha complains that they have been slaying demons left and right but they never get their heads. Setsuna asks her why does she have a debt in the first place.

Moroha replies that’s because of that master and Setsuna pick up a smartphone from the ground. Setsuna thought that it was something evil and she wanted to slay it. Towa told her to stop and reveal that it’s not evil to is a smartphone. She reminds her when she use it when they were over in the other world. Towa explains to the two how the cellphone operates. Setsuna still thinks that it will bring the evil they have to slay it.

Yashahime: Princess Half-Demon Episode 15 will be released on Saturday, 16 January 2020, at 5:30 PM JST. Keep in mind that the new episode of this Anime will be released every Saturday. Make sure to watch out the spoilers for episode 15. Watch out for them when you continue. You can watch this Anime officially on Crunchyroll, AnimeLab, Funimation, and Netflix. Let’s take a look at the recap of this Anime and preview below.

Towa said that there is no point in having it since there is no signal but she can let go of it. Moroha said that she has something like that and she showed them the Kappa foot that grandpa Higurashi gave him. The two went and meet the corpse dealer and Setsuna asks if Mr. Jyubei is here. When they get inside the house Moroha bums with an unknown lady. She thought that she got inside the wrong house.

The lady greets them and said that she is Tamano and Mr. Jyubei said that they have a job for them. Tachekyo comments that it is a wonderful job for their very special client. Riku comments that the job is not coming from him and Tamano escaped from Homura an evil god from the Nother mountain. Tamano reveals that she and Homura lived alone in a mansion in the Northen snowy mountains.

Moroha asks if Tamano and Homura were husband and wife and Tamano refuses. Mr. Jubyei reveals that Homura thought that he was married to Tamano. Tamano explains that ever since she was little she never been raised by her grandparents. In a village at the foot of a snowy mountain. Something happened when Tanamo turns 13 and marriage proposals kept arriving every day. Everyone wants Tamano to become their wife.

Tamano reveals that she didn’t want to leave the village and she rejected all the men. One day in the middle of the night Homura suddenly appeared and dragged her away to the snowy mountains. Moroha asks why and Mr. Jubyei said that because he wanted Miss Tamano all to himself. Tamano reveals that she was forced to live with him in his mansion deep within the snowy mountains.

Tamano finds it strange that only Homnuras’mansion didn’t have any snow in it and it seemed like spring. At first, Homura treated her with warmth and kindness. When other men started to greet or look at Homura. He gets angry and punishes them or burn them to ashes for looking at his Tamano. One day Homura killer the gardener for just looking at Tamano and he begins to kill every guest that comes to visit.

Even when the servant asks her about the meal or anything Homura kills them. Homura started to think that Tanamo is seducing all the men. He decided to lock her saying that he will never have anyone look upon her ever again. But she escaped when he was not around and met with Kuri who saved her and bring her here. Kiru said that they want the trio to slay Homura .

Mr. Jubyei said they don’t have a reason to refuse since it is the head of an evil mountain god. The trio went together along with Kara and Kachkyo. Meanwhile, Homura finds out that Tanamano has escaped. He started barning with rage and the trio reached the snowy mountain. They invaded the mansion and Moroha saw how Homura looks and jumps out. She thought that he is a weakling challenging him that she can finish him in a single blow.

Homura unleashes a gust of fire from his mouth and sends Moroha flying. When he is battling with Towa and Setsuna he finds out that the two possess the Gold and Silver Pearls. After a long battle, they managed to slay Homura and send him to hell. Towa tells Tamano that she can head back to her village and live freely with her grandparents.

For today that is how we conclude this Anime by all of the above updates. Come back next week for more latest updates on the next episode.