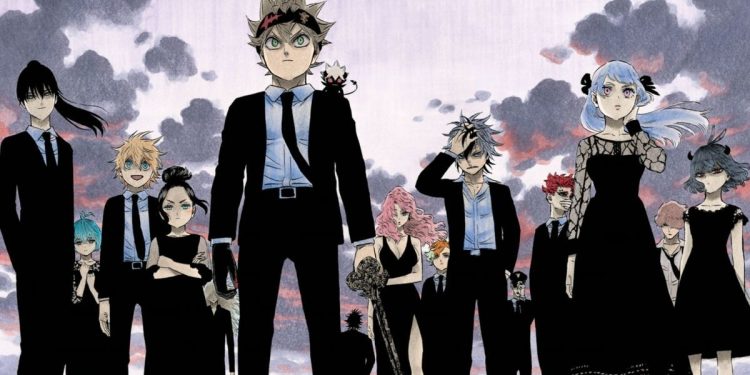 One of the finest Shōnen anime and manga series of all time is Black Clover. If you’ve enjoyed the manga thus far, you’re probably interested in what occurred in one of the most prominent characters, Yami Sukehiro’s past. Black Clover’s recent chapters are highly anticipated and in here, we shall discuss what happened in Yami Sukehiro’s past due to which he went on to form Black Bulls. Along with it we shall also discuss Mereoleona’s triumph against the ancient demon, the opening of the portal to the Tree of Qliphoth’s second level, and the Black Bulls preparing to confront Lucifero.

The Japanese manga series Black Clover is written and illustrated by Yuki Tabata. The series began serialization on the 12th issue of Weekly Shōnen Jump on February 16, 2015. The story focuses on fantasy, adventure, and comedy genres while maintaining the “Young Boys” demography. Asta and Yuno are orphans who grew up on the Clover Kingdom’s periphery. Asta was born without magic in a world where individuals are born with it. Yuno, on the other hand, was born a genius with exceptional magical abilities and the ability to control them. Yuno also receives a unique four-leaf clover grimoire, similar to the original Magic Emperor, at their coming of age ritual. Asta, on the other hand, was given a torn five-leaf clover grimoire that contained a Devil.

What Happened in Yami Sukehiro’s Past?

Yami Sukehiro’s past showed him sitting in ruins as he stared at his grimoire and recalled the insults that were flung at his Dark Magic. Although the remarks continued to sting him, many people praised and admired his magic. Julius Novachrono was one of them, and he was ecstatic to witness Yami’s Dark Magic and stated he wanted to learn more about it. Yami was taken aback by the fact that others were interested in learning more about him. Morgen Faust and Nacht Faust were later introduced to him. While Nacht was cold towards, Yami, Morgen admired him as both Morgen and Yami joined the Grey Deer.

Through his journey, Yami met several others like William Vangeance, Owen, Charlotte Roselei, Jack the Ripper, Nozel Silva, Gueldre Poizot, Mereoleona Vermillion, and Fuegoleon Vermillion. They were all Magic Knights, who later went on to become Magic Knight Captains, except for Owen, of course.

Why did Yami Sukehiro form the Black Bulls?

When the former confessed his insecurities, Yami and Morgen had a heart-to-heart talk. In comparison to others, Yami believed his Dark Magic was weak. Morgen said that the strength of the magic was determined by the wizard. He went on to say that Yami has a good eye for people and can bring them together. He suggested that Yami would be an excellent brigade leader. But Yami cut him off, pointing out that men like Morgen are the ones who should be in charge.

In the next panel, Yami visits Morgen’s grave and declares that he will form his own brigade of mages who have been overlooked by others. He was taken in by Julius Novachrono and he would do the same for the next generation of magicians. Thus, he went on to find the shunned members of the Kingdom to join his squad starting with Nacht.

Will Yami and Vangeance be saved?

Mereoleona’s battle against the ancient demon at Spade Kingdom’s royal castle comes to a close in Black Clover Chapter 314. Mereoleona explains that the more she fights with her Hellfire Incarnate, the more power she gains. Mereoleona continues forward to aid others, despite the astonishment of those around her. Captains William Vangeance and Yami Sukehiro are confined within coffins inside the magical circle in Black Clover Chapter 314. The members of the Golden Dawn scream for their captain as William apologizes to his squad.

However, when the Black Bulls call for Yami, their cries are drowned out. The gates of the Qliphoth are opening even quicker now that Lucifero has absorbed the vitality of the accelerant. The second gate opens in the following panel of Black Clover Chapter 314, and countless devils stream out.

Black Bulls are getting ready to face the new monsters in Black Clover Chapter 314. The Black Bulls arrive at the Spade Kingdom in the final chapter to save Captain Yami Sukehiro and William from Moris. Asta and his comrades are unable to prevent the coming of the Qliphoth Tree after defeating the Dark Triad. Gordon also releases Modified Magic: Curse. He didn’t use any poison in his medication. His Curse Magic is now quite powerful. Moris is becoming frail. Moris is ready to be punished, and Yami is about to be saved by the Black Bulls.

Where Can You Read Black Clover?

Only a few online manga reading websites have an authorized translation of Black Clover Chapter 314. Viz.com and Manga Plus both offer free access to all the chapters of the manga.

Also read: Where And How To Read Black Clover Manga?