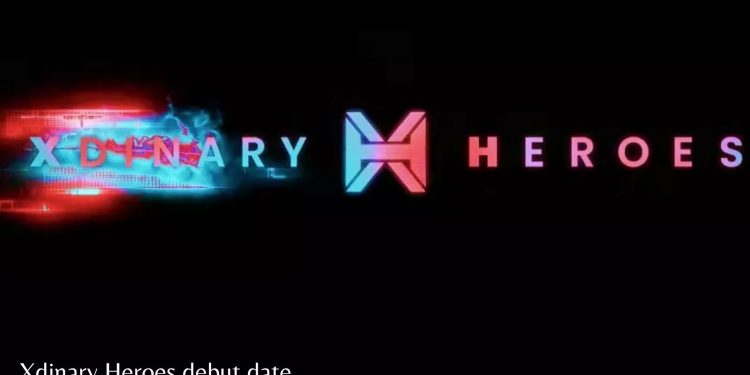 JYP Entertainment is hyping up the debut of their new boy band- Xdinary Heroes. The upcoming release in the Kpop world is already exciting. However, the concept of Xdinary Heroes has gained a lot of attention from fans since its JYP’s first band in six years, after DAY6. Now, with its release date out, Kpop enthusiasts are more excited to see the band debut with their first single – “Happy Death Day.” Clearly, the concept seems different than the regular Kpop boy groups. On the other side, the teasers and the titles are intriguing enough to lure the audience. So, are you excited about JYP’s new boy band- Xdinary Heroes?

Xdinary Hereos, which actually means “Ordinary Heroes,” is a new Kpop band formed by JYP Entertainment and Studio J. The six-member boy band will follow the steps of DAY6 and work on releasing rock music. In late October, JYP dropped the first teaser- “Coming Up Next” for Xdinary Heroes. Later, on November 1, they released yet another teaser- “Heroes Are Coming.”

Now, JYP has confirmed Xdinary Heroes’ debut date. In addition to this, the agency has excited fans with fresh teaser pictures of one of the members.

The new boy band from JYP Entertainment – Xdinary Heroes – will debut on December 6, 2021, with their first single, “Happy Death Day.” To make this more interesting for the fans, the agency released teaser images for Jooyeon, the Bassist of the band. With a hint of yellow and blue highlights in his hair, Jooyeon looks extra dashing and cool with his racer outfit. Also, he rocks a lip piercing while rocking the AC/DC shirt, channeling the inner Rock band fan.

A recent update is made with the teaser pictures of O.de, who is rocking silver hair like no other. To be exact, he looks exactly like “Jack Frost.” Just like Jooyeon, his extensive accessories make the teaser image stand out. Plus. We would like to know how he managed to rock a chain on his eyelid.

Jooyeon and O.de are the first ones to amaze the fans. The other four are still on the way. Plus, a group teaser will also be a part of the debut scheduled for Xdinary Heroes. The group also consists of Gunil, Gaon, Jun Han, and Jungsu.

Jooyeon was the first member to be revealed on November 15. Next in line was O.de, Gaon, Jun Han, Jungsu, and finally, Gunil. After the members were brought to life, a teaser titled “Origin of Xdinary Heroes” was shared with the netizens. The next thing for JYP was to share performance videos of the boys, which shared their talents, and the positions they would handle in the group.

As we mentioned, Jooyeon is the Bassist for Xdinary Heroes. O.de will be the Synthesizer in the band. Meanwhile, Gaon and Jun Han will take the position of Electric Guitarist. Lastly, Gunil will be the drummer, and Jungsu will work on the Keyboard.

JYP Entertainment is known for forming royal girl groups in the Kpop Industry. Founded by the iconic Kpop artist- Jin Young Park (JYP), the agency is home to some of the most prominent Kpop groups, including TWICE.

With Xdinary Heroes, JYP has spread a message that “anybody can be a hero.” This might open gates for new JYP to try a new concept. After GOT7 left the company at the beginning of 2021, JYP is ruling the agency with Stray Kids, ITZY, TWICE, 2 PM, and many other sub-units. However, Studio J- an independent label by JYP- also manages boy bands like DAY6.

In a Kpop dominating country, DAY6 has managed to make people fall in love with rock. Xdinary Heroes will follow the same path. However, with young members, it will target the upcoming teen generation too. Xdinary Heroes is the first group after DAY6 to debut under Studio J/JYP. Therefore, fans have an abundance of expectations from the band.

While JYP releases other teaser pictures, learn more about Xdinary Group at their SNS Account. Also, mark down the debut date of Xdinary Heroes now.