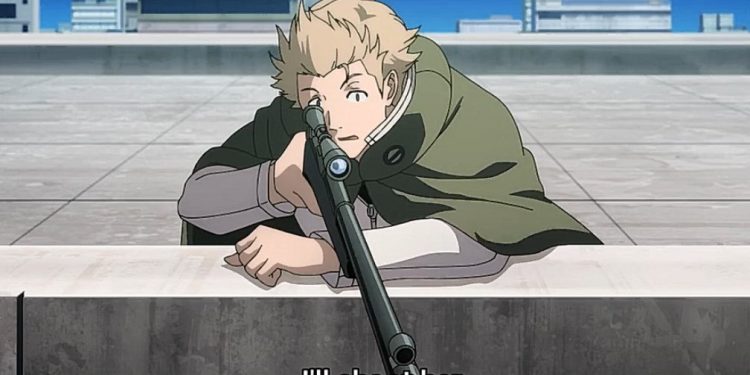 World-Trigger Season 3 Episode 14 reveals 1v1 as the B-Rank wars continue. Hyuse was taken out after the captains of all squads cornered him, and he bailed out after his Trion was finished. Ikoma also lands Kogetsu: Whirlwind, but Hyuse takes him along. The commentators announced that Captain Ikoma and Agent Hyuse had bailed out. Chika knows that she failed to use Meteor to take out eight guys. Buy Hyuse motivates her that she can land the final killer blow. World Trigger Season 3 latest episode reveals Chika, who takes Hyuse’s position to support Kuga and Osamu.

The B-Tank Wars has arrived at the final stage, and Tamakoma-2 wants to reach the top rank for an Away Mission. Kyosuke talks with others, and Izumi joins them since they both have different ideas on winning Squad. Izumi is glad that they are watching the final matches and are interesting. He realizes that Tamakoma-2 and Ikoma’s Squad has lost their key player, and Kyosuke believes that Osamu has a lot of plans. But he is worried about Chika since she missed her target. Obishima battles with another guy trying to make Yuba’s squad reach the top.

Yuba and Obishima dominate Ikoma’s squad, knowing that Ikoma has been taken out and advantageous. The commentators wonder if Yuba’s squad duo will pursue Minamisawa. They also aim to take out Kai, who lost his arm after Obishima uses his blade against him. Yuba’s Squad realizes that they cannot let Sumi lose. Yuba realizes they need to snatch a point from Minamisawa, but he challenges them. But if Inuka escapes, their Squad will gather unwounded. The commentators are impressed, and they wish Kandata were part of this.

Obishima told Yuba not to worry since he would take down Minamisawa and Yuba could chase Inukai. Yuba accepted that and told Obishima to remember that range is his superior. Yuba Squad gets separated since they have different targets, but Tamakoma’s trio is watching their moves, and Chika knows another hard challenge awaits them. Tonooka, who almost took out Kuga and Chika, also watched Tamakoma since he knew that taking them out would be a massive victory. Kuga moves from his position to meet with the oncoming enemy.

Yuba reaches Agent Inukai and lands a massive blow that cuts Inukai’s arm. Inukai realizes that he can defeat Yuba in his condition and decides to escape. Tamakoma is also ready to attack another group. Osamu reveals that their target is Minamisaw’s group since they may trigger Chika’s bombs again, and she will fail to use her Meteor. He advises Chika to use Hound to send the enemies away. Kuga and Osamu will knock them out after Chika smashes them. Chika accepts that, and Toonoka notices that Chika is left alone. Toonoka warned his team that Osamu went to face Obishima, and he received orders to attack from behind.

But Chika unleashes Hound and Toonoka realizes that he expect her to do that since she wouldn’t use Meteor again. Toonoka believes that he will shoot Chika this time, targeting her. Chika is unaware, but it was a trap, and she blocks his shot and warns the other that she has found him. Toonoka decided to escape after realizing that it was a trap. But they blast him, and the commentators reveal that Tooka has bailout. Ikoma  Squad, Oki stole that point since he landed the last shot on Toonoka.

World Trigger Season 3 Episode 14 will be released on 16 January 2022. Chika decides not to get carried away and begins to move. Kuga defeated Obishima using the same technique, but it was a new combo move. Takamkoma’s ace added a point to their squad. Tamakoma needs two points to win the match. Yuba realizes that they are in danger after Kuga uses a swerving blade to take Obishima. Let’s look at Episode 14 official details.

The duels between captains begin as they aim to take Yuba down. Ninomiya won the duel between captains after defeating Yuba. Three teams remain, and it will be a 3v3 showdown. Kuga notices that Ninomiya is glad to defeat Yuba since Yuba missed his calculations. That was all about the World Trigger-Season 3 Episode finale.

Luke Rodgers And Aimee Rodgers Are Expecting Their First Child!