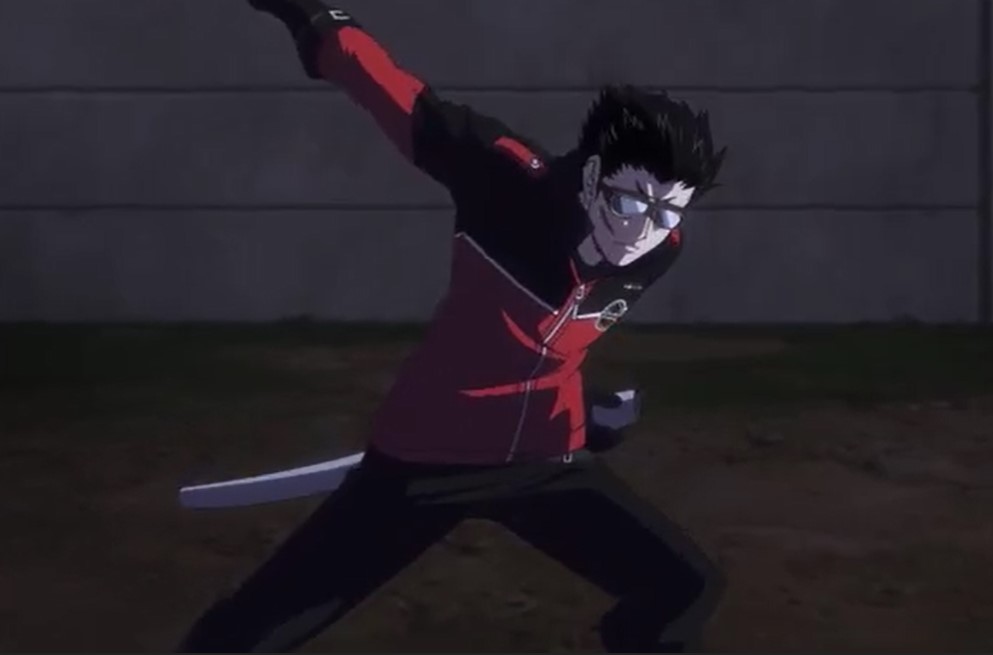 The B-rank battle has begun. Oji and Ikoma squads are planning to work together and take down Tamakoma-2. Kuga is facing Kashio, who almost falls on top of the wires. But Kumageas cut Kshio’s hand using a lightning sword. Chika has also managed to snipe Kai’s leg. He realizes that he was hit by Lead Bullet, and Oji noticed that. The commentators reveal that Kuga’s distraction has worked, and Chika has managed to make a clear shot with a Lead Bullet.

The other one comments that Tamakoma-2 has done their homework perfectly sing they aim to destroy the enemies’ legs. Oji orders his team to block Chika’s attacks. Kuga rushes in and blocks Oji’s squad. He is facing the trio alone, and the commentators are wondering if he is stopping them from getting to captain Osamu’s way. Oji thinks he should let Kashio pursue Osamu. But he is not sure since he wants to have a 3v1 combat with Kuga.

Ikoma arrives behind Kuga and unleashes Kogetsu: Whirlwind that Kuga manages to block. But his sword got cut along with his ribs, and Oji prases Ikoma’s Whirlwind. Ikoma is surprised since he didn’t finish them. He thought that he would have finish Kuga and the trio. Kuga comments that Ikomoa’s Kogetsu seems longer than what he saw. Kuga uses his other hand to cover the Trion that is leaking from his ribs. Ikoma wonders why he didn’t finish them since they were in his range.

Satoshi comments that they were lucky, and Ikoma said they dodge it like it was nothing. Satoshi told Ikoma to try attacking them again. Ikoma attacks with another Whirlwind, and the trio jumps away along with Kuga. Oji is wondering since he knows that they should have started by taking a stronger squad. But Ikoma wants to make out everyone. The commentators reveal that the maximum range of Whirlwind is 40 meters. That is the longest among all the attackers. 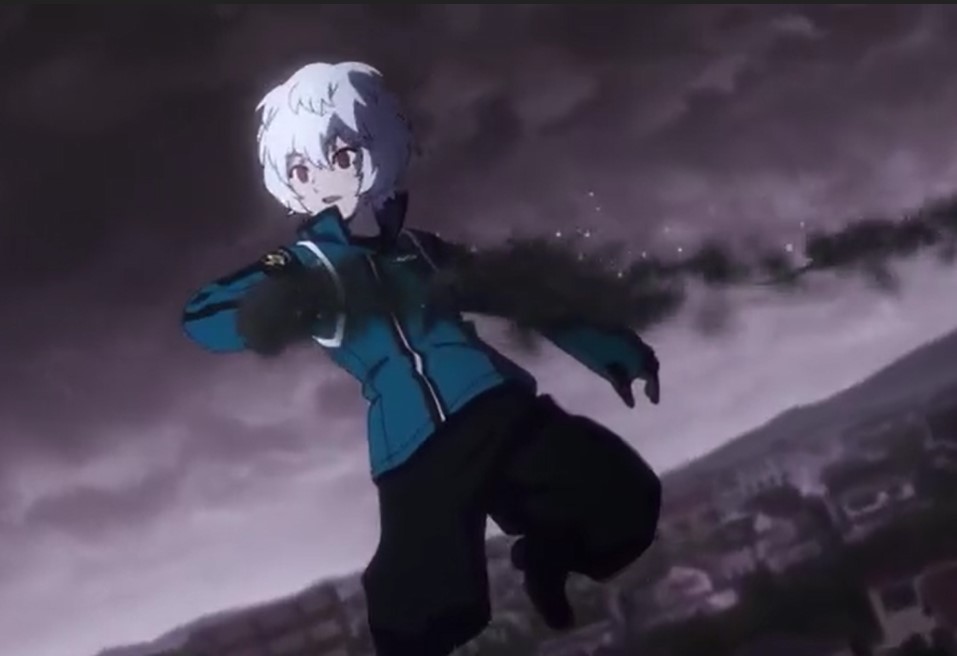 The commentators wonder if Ikoma’s Whirlwind is different from the normal one. The chubby guy comments that o one can use Whirlwind in his squad. The commentator reveals that Whirlwind’s range is inversely proportional to its effect duration. But the sword has to be super fast and perfectly synched with Whirlwind. No one can perfect the Whirlwind like Ikoma.

Oji unleashes Hound mand decided to first take care of Kuga. Kuga jumps before the attack hits him. Satoshi comments that Kuga is running away and ask which squad should they attack. Ikoma comments that they can attack Oji’s squad and get payback for Kai. Satoshi attacks with Asteroid, and Oji’s squad jumps up. Oji comments that he is using Hound. Satoshi is disappointed that they have noticed what he was trying to do. Ikoma attacks with Whirlwind, and Kashio blocks it with Grasshopper.

But Kazuki receives a blow, and the commentators reveal that the attacks was focused on him. The chubby guy comments that they are taking out an easy target first. Oji told them to attacks back and kept the fight at a distance since Ikoma is a threat. But Kazuki got finished by Kuga, and Tamakoma-2 gets one point. He uses a Bagworm to cut Kazuki’s head. The commentators praise Kuga for great scoring in the middle of chaos. Oji realizes that he was focusing on Ikoma, and they lost Kazuki. 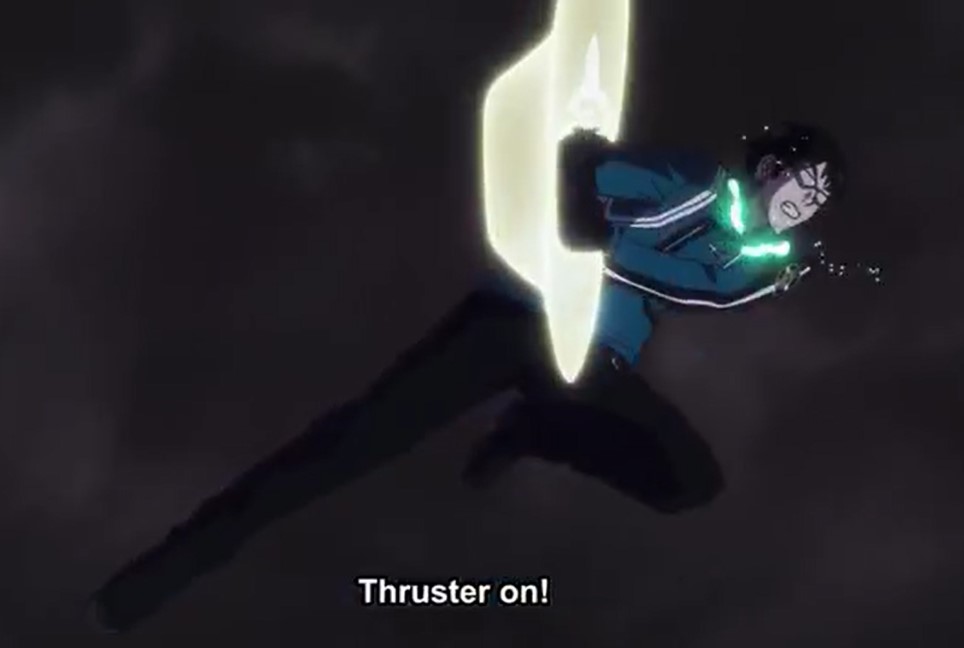 Satoshi comments that Kuga stole their points and Ikoma aid their sniper got him first. Oji Squad has now lost the core of the mid-range combat. Kuga could have ignored Kazuki to immobilize the whole team. But he chose to take him out after realizing that the shooter can fight without arms or legs. Oji will go back to their running tactics. Haya told Oji and others that she displays the paths in the sniper’s blind spot. Oji noticed the paths and decided to retreat quickly.

The commentators think that Oji is waiting for Tamakoma-2 and Ikoma to finish each other. Satoshi and Ikoma continue to chase Kuga. Chika assist Kuga by snipping Satoshi for Kuga to face Ikoma. Ikoma is worried that they can’t find Four-Eyes  (Osamu). He communicates with Mario to send Chika’s coordinate to Oki.  Mario comments that she has already done that. Oki comments that he has got a glimpse of Chika. But he cannot shoot a super cute girl. Ikoma comments that Oki is handsome he can get away with anything.

Kuga attacks Ikoma when he is giving orders to Oki. Kuga is now on a 2v1 battle, and he asks Osamu what to do since Chika has been spotted. Osamu told him to head north towards the wire zone. Kashio decided to take down Chika before Osamu come and gets her. But she attacks him by tracking lead bullets. Osamu arrives and unleashes Thruster Slash Combo that takes Kashi out. Oji arrives and battles with Osamu and Chika, but they are heading to the wire zone. Oji manages to choke Osamu and bails him out. Kuga and Amatori manage to reach the wire zone.