Yeon Soo is bothered by NJ calling Woong but she suppresses her feelings thinking that this is nine of her business. When Woong realizes that he still has feelings for Yeon Soo he kisses her and asks her to stay. 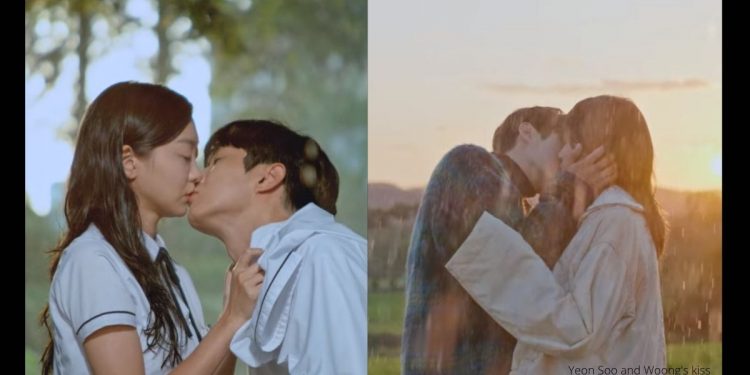 A competent but annoying writer suggests to Ji Woong that if he cannot make someone work together willingly, he should kidnap them. In ‘Our Beloved Summer’ episode 10, he takes this suggestion too seriously and kidnaps Yeon Soo and Woong along with his team. He takes them to a secluded place where they will be staying for the next three days. This trip reminds Woong of the beach trip he took with Yeon Soo, where she confessed that she loved him for the first time.

On the trip, she told him that even if they ever break up, he should come back to her and when he does, she will grab onto him and never let go. When Woong is reminded of this, he again comes back to Yeon Soo despite all his anger. Somewhere he always knew this would happen in the end, and maybe because of this, he has been uncomfortable around Yeon Soo.

Till now, in Our Beloved Summer, we have seen that Woong and Yeon Soo go AWOL on Ji Woong, and this makes him anxious. Also, NJ plans a volunteering event and includes the online haters who comment hurtful things on her. As the volunteering event is a bust, NJ is feeling down, and the only person she could think of is Woong. While they are talking, sitting in a playground, NJ suddenly confesses that she likes Woong, and this makes him startle. However, she leaves without listening to Woong’s answer as some kids come running to find her.

After looking around for a while, Yeon Soo finds Woong with NJ at the playground. She is upset to see them together, and Ji Woong notices this. Later, they have a walk, and Ji Woong asks Yeon Soo if she will continue the shooting. Woong is unaware of this, and he goes back home at night. He finds his house in a chaotic condition after Eun ho and Sol Yi’s party.

The next morning, Ji Woong arrives at Yeon Soo’s house and makes her go on a drive with him. Whereas Ji Woong’s colleagues kidnap Woong. Finally, all of them arrive at a house in the forest where they will be living for three days. Way back in the past, Woong and Yeon Soo went on a trip, and both of them still remember it. During the whole trip, Woong thinks that Yeon Soo is gonna break up with him, but it is to tell him that she loves him. However, in front of the camera, Woong says that he does not like trips and nothing memorable ever happened to him.

Back at home, the buildings in Woong’s neighborhood have become very famous because of the drawings Woong makes. Because of this, even his parents’ restaurant gets a lot of customers. Later at night, NJ visits the restaurant because Woong is not picking her calls. When she sees him take his parents’ call but not her, she feels betrayed and disappointed. Also, seeing Woong get a call from NJ affects Yeon Soo’s mood. She kept thinking about it all night and couldn’t sleep. In the other room, Woong is thinking about why is he still uncomfortable around Yeon Soo? This thought keeps him up all night.

‘Our Beloved Summer’ episode 10 will be released on 4th January 2021. In the upcoming episode, Woong holds Yeon Soo’s hand when she comes to his room to check on him. She is not sure if he was sleeping or awake at the time. After this, they move on with shooting the documentary, but the camera’s battery is out. Yeon Soo feels like this is a Deja Vu because this is how her relationship with Woong started. The next thing we know, it starts pouring rain, and Woong shows up in front of Yeon Soo. When Yeon Soo asks Woong if she should leave or stay and he responds to this question by kissing her.

Where To Watch ‘Our Beloved Summer’ Episode 10

Also Read: 31 Best Romantic Korean Dramas of all the time.

What is Beeple’s Net Worth in 2022? The Successful Art Career!