NJ is very persuasive and takes Woong on a date but Yeon Soo is upset to see this. Later, when the dating rumor makes it to the news NJ lies to Yeon Soo saying that she and Woong are in a relationship. 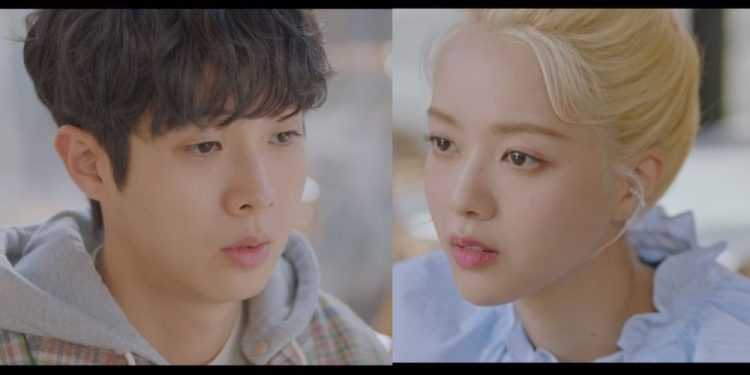 Yeon Soo is hurt, thinking that Woong hasn’t acknowledged their kiss. When they come back from the trip, he becomes sick and is not able to contact Yeon Soo. After waiting for days, Yoon Soo decides to go to Woong’s house and ask him for clarification. Although his answer is very hurtful to hear. In ‘Our Beloved Summer’ episode 12, Woong confesses that he never wants to date Yeon Soo again.

Even though things seem bad for their relationship, Woong wants to keep Yeon Soo in his life and suggests that they should try being friends. Yeon Soo agrees to it, but she is troubled when she sees NJ being close to Woong. Woong and NJ go on a date, and a couple of fans take their picture. This picture makes its way to the news, and a big article about NJ and Woong dating is published the next day.

Till now, we have seen that Yeon Soo and Woong try to become friends. Finding out Woong’s decision Yeon Soo starts to act out and forces herself on him. In the name of being friends, she stays over at his house and spends the whole day with him. No matter how much both of them try to deny, it is clear that they still have feelings for each other. Later at night, Yeon Soo opens the door, thinking it is food delivery. Ji Woong is surprised to see Woong and Yeon Soo together this late at night. This makes him wonder if they are seeing each other.

Yeon Soo returns home the next day and lies to her grandmother that she stayed at Sol Yi’s house. However, Sol Yi is at her home, which creates a problem for her. Later, Yeon Soo confesses that she stayed at Woong’s house and that they are trying to be friends. Sol Yi explains to her that she is feeling uncomfortable only because she has a crush on Woong. As Yeon Soo thinks more about it, she is sure that it is not just a crush but love.

How Did NJ And Woong Meet?

While shooting for the documentary, NJ tells the story of how she met the artist Ko-o. She lives a very professional life going from one performance to another. One day while reading the news, she clicks on an advertisement that directs her to Ko-o’s drawing page. She finds the drawing weird at first, but when she visits the exhibition, she cries looking at one of his paintings. This is the place where NJ meets Woong and finds out that he is the famous artist Ko-o. After their first meet, she thinks that he will be a passing cloud, but she keeps finding comfort in his company.

Woong and NJ go on a date where they encounter some rude people who talk bad about NJ. However, she ignores the situation. When he drops her home, she asks him to come up to her apartment. Woong refuses her offer, saying it would be best if he goes home. When he gets back home, he finds Yeon Soo’s pouch in his bathroom and decides to return it the same night. Seeing him after so many years, Yeon Soo’s grandmother invites him in for dinner. However, she makes him very uncomfortable and keeps yelling at him.

The ‘Our Beloved Summer’ episode 12 release date is 11 January 2021. Yeon Soo’s grandmother keeps cursing Woong because she does not know the truth. Yeon Soo tells her that she should be scolding her because she is the one who dumped Woong. And now, she keeps regretting her decision and blaming herself because she cannot be his friend. The next day at the office, her eyes are all red and swollen. When she is walking back home, Sol Yi calls her to tell her about the Woong and NJ dating article, but the call gets disrupted in between.

Where To Watch ‘Our Beloved Summer’ Episode 12