With Emily realizing her potential and changing one Dickinson at a time, her goal has come to a conclusion this season, but will there be more of her journey with Dickinson Season 3 Episode 11? 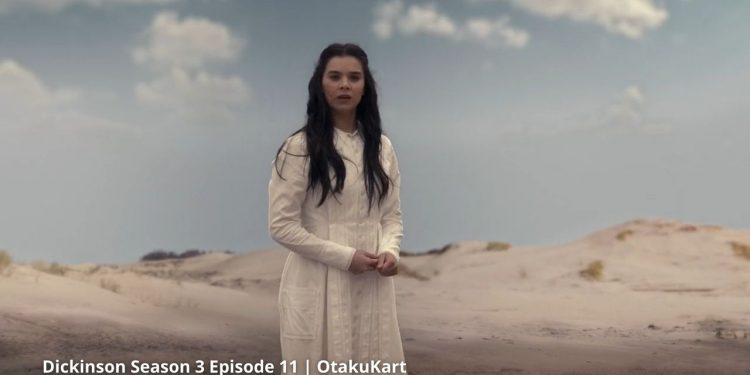 With Emily Dickinson completely realizing her potential, a surprise guest knocked on her door ready to take her new heights. So are we in to see the journey of Emily on how she becomes the great poet in Dickinson Season 3 Episode 11? If not, could we expect a new season altogether? That’s what we are looking for as the main motive of this season which saw Dickinson discovering herself was coming to conclusion. It took some time traveling and some journeys to hell and back but it did work.

The future saw Emily realizing what she becomes. In turn, it also exposes some truths she kept away from her closed ones. The moment when the man she admired the most, as in her own father broke her heart by name his will for Austin, it took her to hell and on a journey to change one Dickinson at a time. As this all came to be fruitful, there were only a few things she needed to take a look at before she could begin her journey.

Previously on Dickinson Season 3, we opened up with Emily meeting Death in a new dress. While he shows it off, he also advises Emily to get a flexible one for herself. The one that will allow her to go deep into her poems and express herself. Emily agrees with him and leaves after a dance number. Meanwhile, Edward and Emily Sr. were greeted by none other than Austin and Susan who brought their baby along. They were about to name him and at the same time, Austin had some business with his father.

Austin wants to work on a legal case with his father as it requires his area of expertise. So, the case is about Angeline Palmer, a freeborn black woman. She worked at the Shaws and the same Shaws tried to sell her into slavery. A group of men saved her but now they are behind the bars. Initially, Edward didn’t see how they could go up against someone as powerful as Shaws.

It took Austin to convince him on how they can change things around and could get Dickinson’s name back on the top. Looking at Austin’s passion to change society, Edward shook hands on it. At the same time, a guest knocked on their door in the form of Colonel Higginson.

Colonel Higginsons’ presence and his excitement to meet Emily intrigued everyone in the room. One way or another they admired him as well as his sister. Colonel Higginson also became familiar with the Dickinsons as well as their crazier aspects. After welcoming him, Austin and Sue name their baby after Edward.

Amidst all of this, Emily was busy taking tips from Betty to sew a dress for herself. While Betty leaves, Higginson meets her to let her know about her brave husband Henry. Also finally, Betty receives all the letters Henry had been writing for her. Emily finds herself nervous avoiding meeting Higginson. On the other side, Higginson is ready to wait as long as it takes. Although we don’t see, “By The Sea” is read with a beautiful dream Emily is in that marks the beginning of her new journey.

Dickinson Season 3 Episode 11 is not happening. The third season of Dickinson Season 3 only consists of 10 episodes that not only marks the end of the season but also the show. As of now, Apple TV+ or the creators don’t have any plans on expanding the story of Emily to a bigger picture. It was all about her finding herself for the last three seasons. Towards the end, it worked out well. Still, we will keep you updated if Apple TV+ ever feels like moving with a new season.

Dickinson Season 3 Episode 11 might not be happening. But, now you can stream Dickinson Season 3 as well as Season 1 & 2 on Apple TV+ in every country the platform is available including the United States, Canada, Australia, UK, and India.