In this article, we will get to know about the Pandora Hearts anime adaptation. 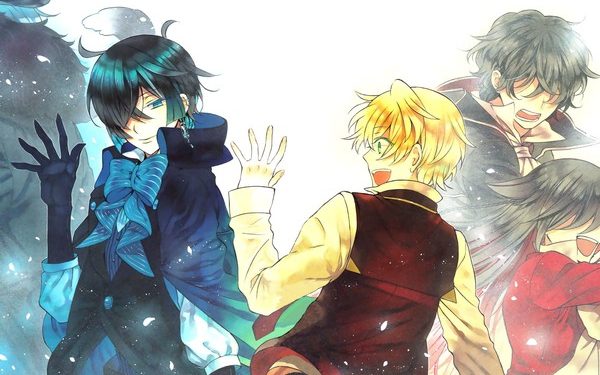 Pandora Hearts is originally a Japanese manga both written and illustrated by Jun Mohizuki. It was serialized from May 2006 to March 2015. It successfully ran on Square Enix’s shonen manga magazine. However, Pandora Hearts has a total of 25 episodes released by Xebec in 2009, and fans are looking for Season 2. Oz Vessealius is the heir to the Vessalius Duke House. Oz does not know at all about the Abyss, which is a world of make-believe in the series.

But, everything starts going adverse as the Baskerville clan interrupts the young Oz’s coming-of-age ceremony. The Baskervilles, who want to drive him into the Abyss, catches Oz by surprise. Oz is now left with nothing and must fight back for his life. The world of Abyss grows larger than life for him as unthinkable incidents occur. The dwellers of the Abyss, generally demons called “Chains,” constantly make it horrifying and difficult for the heir of Vessalius.

Pandora Hearts tells the story of Oz, who has been betrayed by his close ones. He falls into the depths of a fantasy world and discovers that his life is at stake. He should constantly strive to make it out alive and complete his quest. Yet to learn a lot about the Abyss, Oz meets creatures called Chains that guide him to his destiny. A chain called the “The Bloodstained Black Rabbit” becomes his constant reach-out. But did this masterpiece receive an anime adaptation recently? Like Mochizuki’s “The Case Study of Vanitas,” will there be a super-immersive anime adaptation for this series as well?

Pandora Hearts anime has been based on the manga that goes by the same name, Pandora Hearts. It is a supernatural fantasy manga that tells the story of Oz, the young heir of Vessalius. At the tender age of fifteen, he discovers the reasons behind a few bizarre incidents in his life. While being assisted by a mysterious creature also known as Chain, Oz realizes that his life has more meaning than he thought it would. The Chain nicknamed “Bloodstained Black Rabbit” assists him in this journey. Oz goes through several adventures along with Alice. He meets new challenges and finally emerges victorious. The series is often praised for the unique complexity and air of mystery that it brings. But does Pandora Hearts Season 2 get an anime adaptation? Keep reading to find out.

Fans have now almost waited more than a decade after Season 1 of Pandora Hearts first debuted on TV. However, fans are excited to know about the fate of this series. Pandora Hearts was first produced by Xebex studio in the year 2009. It was 25-episode long series that had a number of fillers but had created a significant fanbase for themselves.

Fans keep on coming back to re-watch this series for being wholesome. Pandora Hearts packs action, horror, drama, and romance in one single storyline. Mochizuki has published over 24 volumes of the manga series as dated on June 27, 2015. Thus, creators have a lot they can utilize for their story. Only about 20% of the Manga plotline has been used in the anime series. So, while it is very unlikely that we will see Pandora Hearts Season 2, it is not completely out of the picture.

The main character of the story is Vessalius Oz, a 15-year-old boy who is the heir to the prestigious Vessalius family. His father was the reigning lord of the house, and his mother was killed by the Nightray family. The story begins with Oz as he is pulled into the Abyss for his sin. He meets the Chain called Alice or the Bloodstained Black Rabbit in the Abyss. Alice is no less than the female lead of this series. Her human form has long dark brown hair and stands at a height of about 150 centimeters. She is outgoing and impulsive and loves to eat meat. Jack Vessalius is the man behind the Tragedy of Salbier. He is sort of the main antagonist in the series.

Gilbert Nightfay is Oz’s loyal friend. He had attacked Oz during a ceremony while being controlled by the Baskerville family. Even though Gilbert was unable to like Alice, he got along with her, even saved her life when she fell down a rockslide. Other characters in Pandora Hearts are Oscar Vessalius, Oz’s uncle, Ada Vessalius, his sister, Zai Vessalius Oz’s father, and Rachel Cecile Oz and Ada’s mother.

Going through Reddit and other platforms, it was interesting to note that Pandora Hearts manga is much more popular and gripping than the anime adaptation. Fans who went ahead to read the manga were surprised at the depth it went and found the anime series extremely shallow. The basic difference between them is that the manga delves into the characters and their background deeper than the Anime. Of course, it is not possible to build strong characters in the anime series when you are adapting a manga.

However, the anime adaptation has been praised by fans as well. It took up an entire volume to create the first season of the series. It is complex and confusing but, unlike the anime it is way less dense and easy to catch-up with. Pandora Hearts is a perfect blend of dark fantasy and goofy comedy, which brings out Mochizuki’s unique writing style. The 19th-century aesthetic was very aptly portrayed by the production house. Overall, the anime has been well scripted with interwoven plots in it.

If we speak about manga, it is often said to be too complex for many. The vague resolve and the uncountable number of mysteries have let the readers to quit this manga series within the third and fourth chapters itself. People have often complained about the slow-paced plot of the series. Also, some reasons that cut short its popularity is because Pandora Hearts was dropped by Xebec as there has been no news of its renewal lately. Nevertheless, Pandora Hearts deserves a lot more.

The Pandora Hearts manga has a very emotional ending. The storyline concerning Oz, Gilbert, and Alice comes to a conclusion with the three meeting each other in Lacie’s Tomb. Almost after 100 years, since Oz’s absence, they both finally meet in the Tomb. As Gilbert is mourning the death of Vincent, he at once hears the Lacie melody being sung, and from the stairs descend Oz and Alice, who have come there in the tomb in search of Vincent. Both of them are almost shocked at seeing each other and can hardly move. Oz is tearful even though his full memory has not been restored yet. He looks towards Gil as Gil rushes to hug both Oz and Alice after 100 long years. In the end, we see Jack’s pocket watch returned to where to belongs as both Oz and Alice enjoy Gil’s company.

How did the Audience respond to the anime?

The opening season of the anime adaptation of Pandora’s Hearts got a great response from the viewers. It has received critical acclaim as well. Everyone is thus awaiting a second season eagerly. However, with its manga ending in 2015, a number of people’s hope shattered. If ever the creators plan to bring the series or adapt the remaining volumes, they won’t receive a similar response. The fanbase has suffered a great loss. It has been a decade, and it might be safe to say that it won’t return for another season.

Pandora Hearts is one of the greatest mangas of all time. It deserves anime adaptations for the further seasons. The Victorian aesthetics of the series is elegant and praised by many. It is one of the typical 00s anime. Even the voice artist Miyu Takagi considered it as her favorite anime series of all time. While the fans wait patiently for the relaunch of this anime series, another one of Mochizuki’s manga is getting an anime adaptation. The eight volumes of the manga were ranked 21st on the Tohan charts and volume nine ranked number one. Even the twenty-third and twenty-fourth volumes received a number of mentions. However, Jun Mochizuki’s The Case Study of Vanitas (another super-good manga) has already received an anime adaptation.