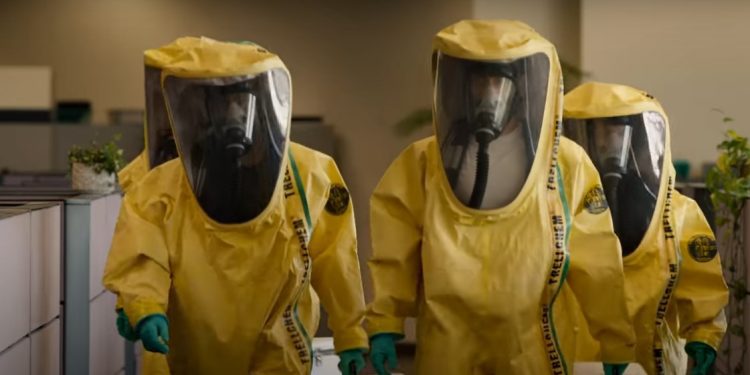 In National Geographic’s latest production, The Hot Zone season 2 Episode 5, the manhunt for the responsible parties behind anthrax-laced letters mailed to different congressmen and media outlets keep on blazing. This post 9/11 series, which is based upon the real case called “Amerithrax” by the FBI, is a very interesting proposal by the network as they are now coming out with real stories with great production value from the past two decades.

Amerithrax during the Bush era caused extraordinary havoc in the population. The American government had to fast-track the approval of selling ciprofloxacin, a potent quinolone antibiotic and people were afraid of opening up their mail in a time where non-state-sponsored terrorism became the new enemy. Titled “The Hot Zone: Anthrax” brings us the stories of a United States Army Research Institute of Infectious Diseases and a Federal Bureau of Investigations agent as they try to find who mailed anthrax to politicians in America.

The Hot Zone Season 2 Episode 5 was released on November 30, 2021, on National Geographic at 9:00 PM, Eastern Time, United States. To begin, the episode was titled “Stentor Roeselii”. Secondly, in this episode, we see how the FBI begins something unusual with Dr. Bruce Ivins, the United States Army Research Institute of Infectious Diseases investigator, helping out with the case. What could be wrong? How is it that the pieces in the puzzle aren’t fitting? Do the feds have a person of interest?

Where to Watch The Hot Zone Season 2 Episode 5 Online?

If you want to watch The Hot Zone: Anthrax, Episode 5, you have a couple of options. Firstly, you could log in to the National Geographic channel website and stream the show from that platform. Additionally, you can stream the show from Hulu, Fubo TV, Sling TV, DirecTV Stream, and Vidgo. If you want to watch the first season, you can also catch it on Amazon Prime Video.

For this season, The Hot Zone brings a cast with Daniel Dae Kim in the lead role as Matthew Ryker, he plays an FBI investigator specialized in microbiology. Special Agent Ryker makes a risky move in the series to cajole his superiors into doing unimaginable stuff weeks after the 9/11 terrorist attacks. Secondly, Tony Goldwyn plays Dr. Bruce Ivins, a United States Military Researcher microbiologist. Moreover, Ivins ends up partaking in the investigation for finding out who was it that sent the anthrax-laced letters to the politicians and media. All while becoming increasingly paranoid.

In the female supporting roles, Dawn Olivieri plays FBI investigator Dani Toretti, a clever and cunning investigator who managed to step into Congress when everybody evacuated the offices. Right after the first anthrax attack letter dropped in the mail. Additionally, Enrico Colantoni plays former Mayor of New York City Rudolph Giuliani. And Harry Hamlin plays NBC news anchor Tom Brokaw, one of the recipients of the anthrax-laced letters.

Will there be a third season of The Hot Zone?

The Hot Zone: Anthrax premiered on National Geographic on November 28, 2021, and concluded on November 30, 2021, with a total of six episodes. To begin, Kelly Souders, Lynda Obst, Brian Peterson, Jeff Vintar, and Ridley Scott are at the helm of the production crew in tandem with Fox 21 Studio TV. While the show was renewed for a second season. And the latest episode aired just days ago, it’s simply too early to tell if National Geographic will order a third series of the show. But it seems very likely.

The Hot Zone covers topics regarding biosafety, international relations, and governmental responses. With the debut season covering the Ebola epidemic. Secondly with the current season covers the Amerithrax case and its fallout. Consequently, the third season might cover stories related to bioterrorism, the emergence of deadly diseases, and these kinds of topics.  Perhaps COVID-19 or the SARS epidemic could take the front stage for the developers. All in all, these kinds of subjects are wide in our society and real life. They touch us in ways, shapes, and forms that we can relate to. With this, we wrap up our scoop on The Hot Zone here at Otakukart. Thank you for reading this piece, and please keep coming back for more daily updates.