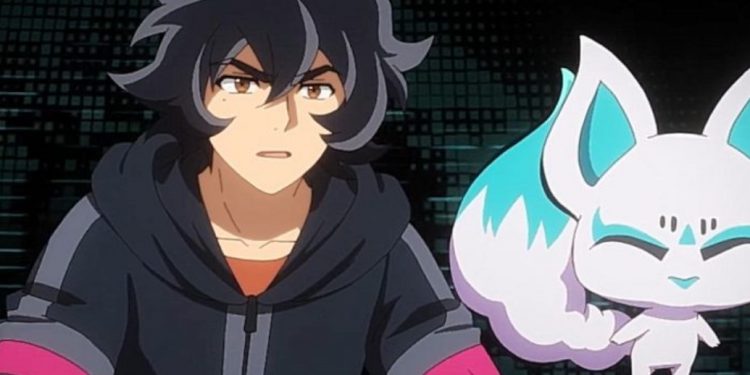 AMAIM Warrior at the Borderline Episode 11 reveals a special assignment Amou and the team must complete in the Tohoku area. Shion and Amou wonder how Mr. Gorbet owns such a big ship and thinks he has connections. He recalls when Mr. Gorbet tells them about the Resistance Organization’s special mission. In AMAIM-Warrior at the Borderline’s latest episode, Mr. Gobert reveals the army that will wipe out the Resistance Organization. He asks Amou and the team to rescue them before they gate killed.

The boss told Amou and the others that they would head to the HQ in different groups. Inside the ship, Shion notices that Tezuko is worried about something. Amou thinks that Tezuko had troubles with Mr. Sanega. Major Zelenoy enjoys his wealth, and the lady helping him arrives. Zelenoy asks first Lietanant Lvov to join him. Lvov reminds Zelenoy that they are on a mission and asks about her orders to give to the soldiers. Zelenoy reveals that Combat AIs will take care of the rest. Lvov reveals plan B and sends the message to the soldiers.

The soldiers surround the enemy’s troops and begin to shoot. The warriors told his men to save their ammo and retreat since the enemies were endless. The guy using a machine gun told Mr. Konno that the enemies had surrounded them and had to fight since they could not escape. Mr. Konno wonders if this is their grave. But he was surprised to see the enemies falling down one after another. Tezuko, Amou, and Shion appear from a long shooting range in the mountains, and they are the ones who took those guys down.

Tezuko is impressed that Maki made a reasonable adjustment on his AMAIM. Shion rides Angelo, who laughs at the enemies since they are exposed, and blasts them. Amou attacks those enemies who are on the other side. Gai reminds Amou that those guys are the Eurasian military that appears in number, and their AMAIMs are inferior. But Amou cares less since those guys have been killing people and wiping them out. Gai tells Amou to slice them with a single strike, and Amou does that. Angelo uses a Samurai blade to cut the ones on his side.

Mr. Konnoi realizes that Amou and the others are not the enemies but the requested reinforcement. He is glad that they survived another day to see their families. After defeating the first team, the second team arrives snd and Amou wonders why they keep on popping up. Tezuko suggests leaving since they have broken the enemies’ formation and rescued the Resistance Organization. He believes that the mission is complete, and there is no need to fight since they will be wasting energy. Amou agrees, and at the enemies’ base, they lost the signal of their soldiers.

Lvov wonders if they have been defeated. The investigation reveals that the unidentified AMAIMs appear out of nowhere and defeat their soldiers. Zelenoy laughs after looking at the AMAIMs picture and reveals that he is heading out to fight with them. Mr. Gorbet receives a report that Amou and the team passed the first stage, and they have rescued the Resistance Organization. He thinks that he will continue to work with them if they complete the new mission. Sagen realizes that Tezuko feels low after finding what happened to Yuusei. Tezuko talks with Mr. Konno and his men.

AMAIM Warrior at the Borderline Episode 11 will be released on 13 December 2021. Mr. Konno thanks Tezuko and his team for rescuing the Resistance Organization. He reveals that they belong to one of the prominent organizations in East Tohoku. But Alexei Zelenoy took over; they had no match for his overwhelming troops. Konno reveals that they are only the survivors, and Zelenoy has killed their comrades. Let’s look at AMAIM Warrior at the Borderline Episode 11 official details.

Also Read: Battle on The New Moon Part 1 In Episode 11 of Yashahime: Princess Half Demon – The Second Act.