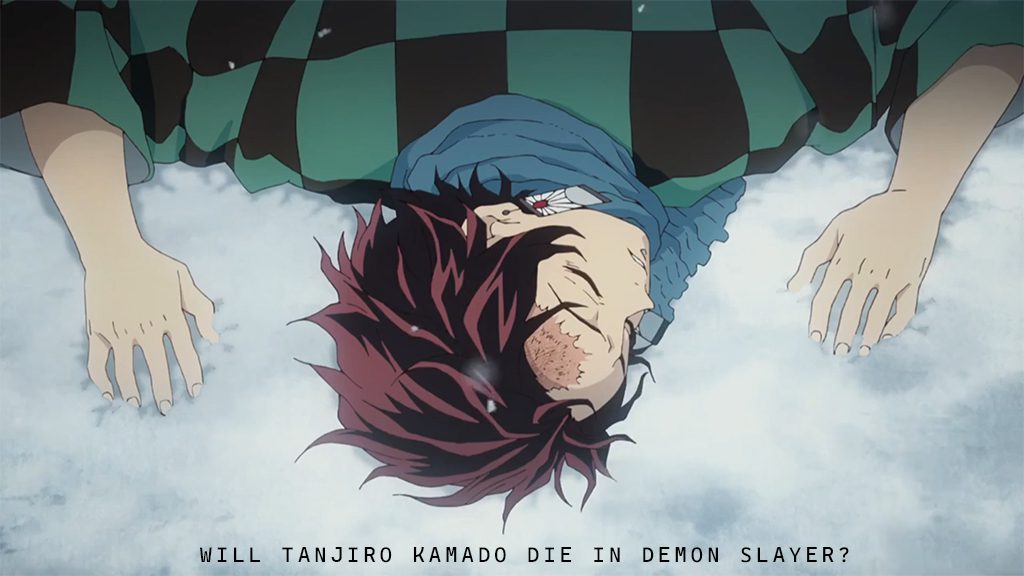 Will Kamado Tanjiro die in Demon Slayer Season 2? How will Tanjiro die in Demon Slayer? These kinds of questions have been going on since the announcement of the second season. Demon Slayer, also known as Kimetsu no Yaiba, is one of the most popular anime of the present time. This anime is an adaptation of Koyoharu Gotouge’s shonen manga with the same name. The manga was serialized between February 15, 2016, and May 18, 2020. Further, it is available online at Viz for reading the manga.

The Demon Slayer anime received praises from the critics and audience for the storytelling and the visuals. After the success of the first season, there is an anime movie that also serves as a sequel. Further, Ufotable Studios announced Demon Slayer Season 2 would release soon in 2021. Since then, there has been a wave of questions among the Kimetsu no Yaiba fans. As they can’t hold their excitement anymore, and they want to know what will happen in the anime. Fans further want about any death will happen or not, especially Tanjiro Kamado. In this article, we will look at whether Tanjiro will die in Demon Slayer. Thus, this article might contain spoilers, so read at your own risk.

Who is Tanjiro Kamado?

Kamado Tanjiro is the main protagonist of the anime Demon Slayer: Kimetsu no Yaiba. He lived in the mountains with his mother and five younger siblings. Don Junior was the only bread earner in his family after his father’s death while he was young. Tangier used to sell coal in the village near the mountains. But one day, he got late, and thus, an old man who lived near the foothill invited him to stay the night at his place. As there could be demons at night, and they can harm Tanjiro. 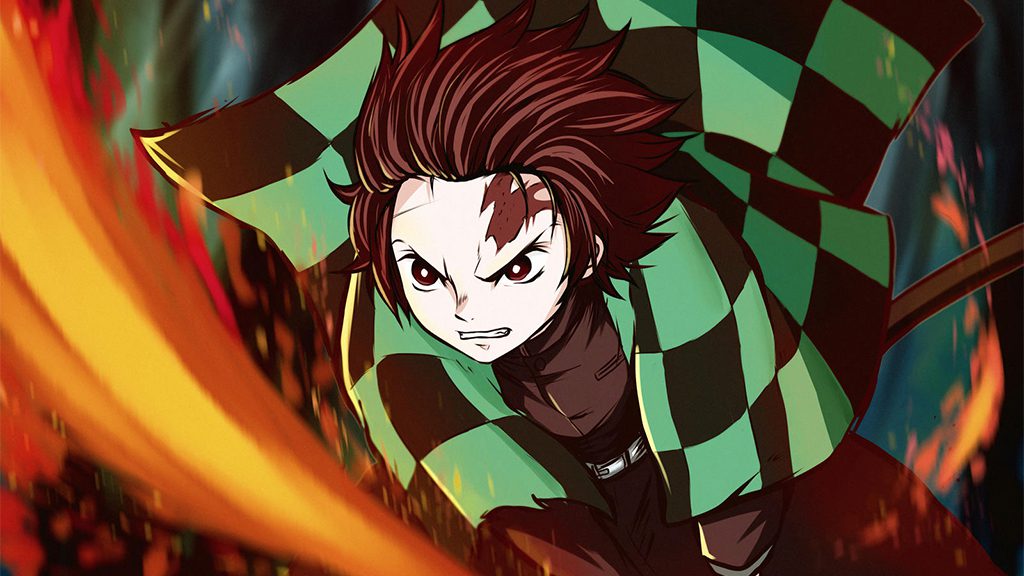 The next day after reaching his home, Tanjiro finds out that his entire family is dead except his younger sister, Nezuko. He was taking his sister to a doctor when Nezuko transforms into a demon and attacks her brother. A Demon Slayer, Giyu Tomioka, appears to slay Nezuko, but he finds out that she still has human emotions even after transforming into a demon. Therefore, he spares Natsuko’s life and asks Tanjiro to take her to Sakonji Urokodaki. Upon meeting with Sakonji, he teaches Tanjiro the water breathing technique to slay demons. After successfully passing the exam, Tanjiro officially becomes a Demon Slayer.

He then sets on a journey with his sister to slay demons and look for a fix to turn his sister into a human again. On this journey, Tanjiro slays many demons with the help of his sister. He later comes across Zenitsu Agatsuma and Inosuke Hashibira, who also join him on the adventure. They fight many powerful demons on this adventure and get closer to the man or demon behind all these catastrophic events, Muzan. Tanjiro also came close to his death many times. As the story continues, Tanjiro also unravels many secrets about his family, demons, and the Demon Slayer Corp.

When does Tanjiro die?

As we see in the first season of Kimetsu no Yaiba that the job of Demon Slayer isn’t easy. Many members of this mysterious corp died while on missions to slay demons. Tanjiro also came near to his death many times and only escaped them with the help of his friends. There is no doubt he has the potential to be a skilled swordsman, but his inexperience got him into deadly situations many times. Let’s look at those events when Tanjiro Kamado was about to die and also when he eventually died.

When Nezuko became a Demon

While Tanjiro was carrying his wounded sister to a doctor, she transformed into a demon on the way. After transforming into a demon, she tried to attack her elder brother and also to devour him. However, she was resisting herself, and finally, Giyu Tomioka stopped Nezuko from attacking her brother. If Giyu didn’t arrive there on time or if Nezuko couldn’t have controlled her hunger, Tanjiro could have ended dead. Even Giyu mentioned it was a miracle he’s alive because usually when someone transforms, they burn a lot of energy and seek the nearest source of food, which can be their friends or family. 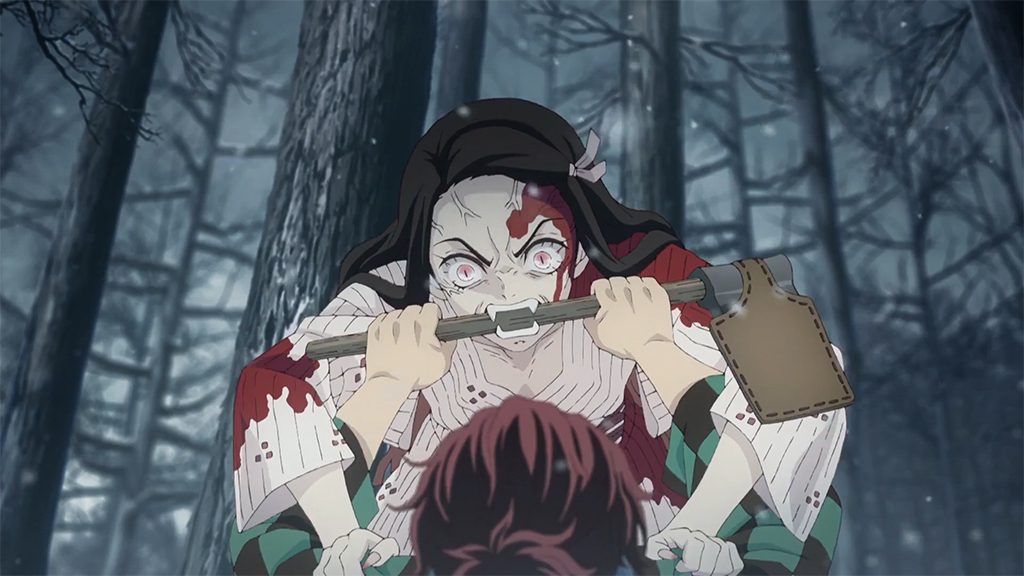 Nezuko attacks Tanjiro after turning into a demon.

Tanjiro and his friends go to Natagumo Mountain after receiving commands to check the area. Many Demon Slayer Corp members died or never made it back after going on that mountain. When Tanjiro arrives there, he comes across a powerful demon, Rui, who was none other than one of Muzan’s strongest demons. He captures Nezuko, breaks Tanjiro’s sword, and even survives Tanjiro’s strongest attack, Hinokami Kagura. Further, Rui was near to killing Tanjiro, only saved by Tomioka again. As the Water Hashira slays the powerful demon. 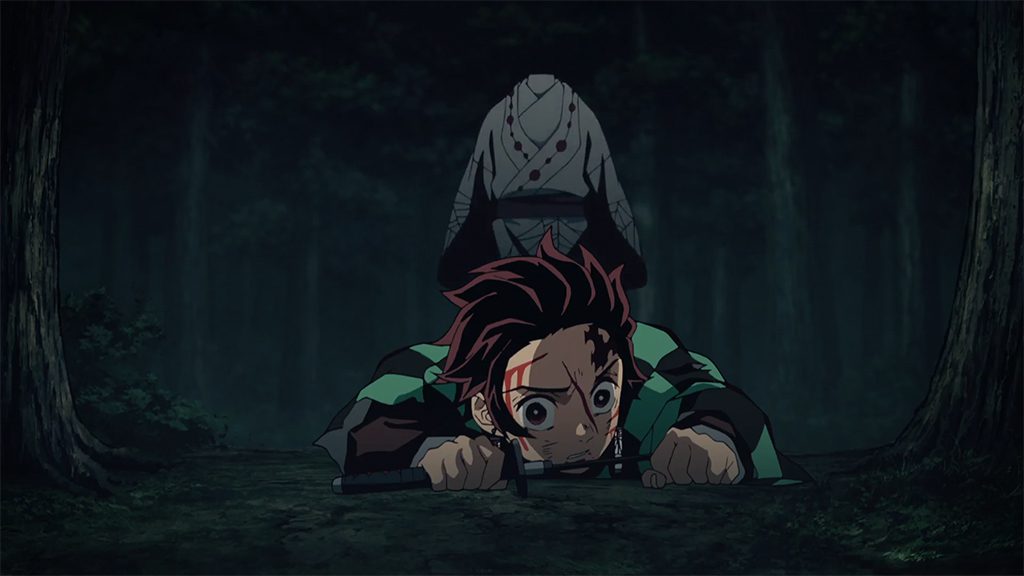 Rui tries to kill Tanjiro after surviving the Hinokami Kagura.

On the Mugen Train

In the movie, Demon Slayer: Mugen Train, Tanjiro and his friends get on the Infinity train. There they meet with the Flame Hashira, Rengoku, to solve the mystery of the train. Soon they discover the train is the feeding spot for Enmu, the Lower Moon One. Enmu has the ability of dream manipulation. He uses this technique to put Tanjiro into sleep. However, Tanjiro commits suicide in the dream to wake himself. Thus, Enmu keeps hypnotizing Tanjiro, and the demon slayer keeps committing suicide in dreams to wake up until he confuses reality and dreams. Tanjiro was about to slice his throat, thinking it was a dream, but Inosuke arrives and stops his friend. 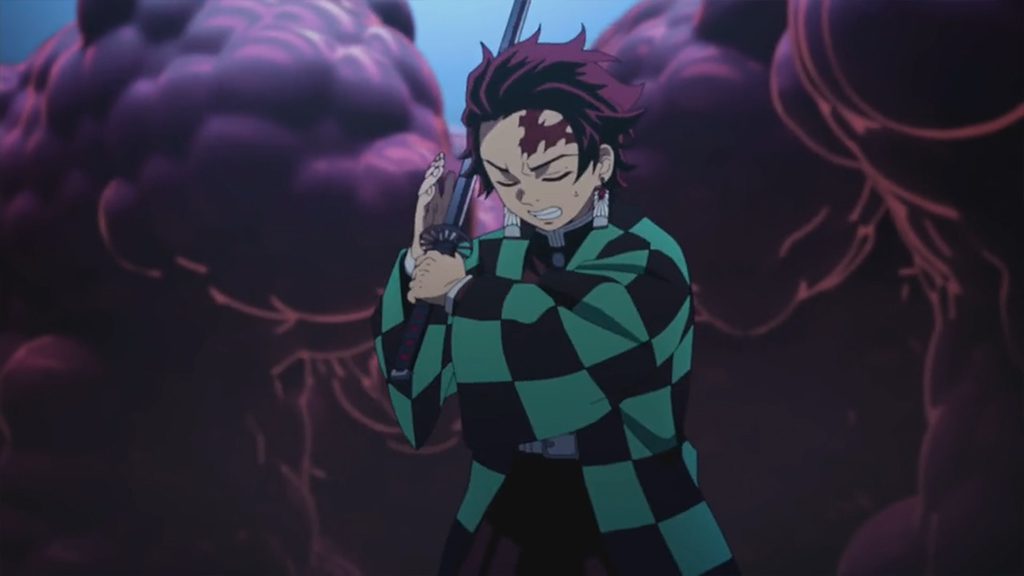 Tanjiro trying to kill himself to wake from Enmu’s dream manipulation.

Tanjiro along with his friends and Sound Hashira visits the entertainment district to investigate some demon activities there. The Demon Slayers come across Daki and Gyutaro, the Upper Moon Six. There Tanjiro gets angry at Daki for berating humanity. In anger, Tanjiro Kamado attacks the demon with a chain of Hinokami Kagura attacks. However, the young demon slayer was attacking in so much rage he even forgot to breathe. He was burning up his life force to take down the demon and could have died doing so. However, the vision of his deceased younger sister, Hanako, asks him to calm down and breathe. 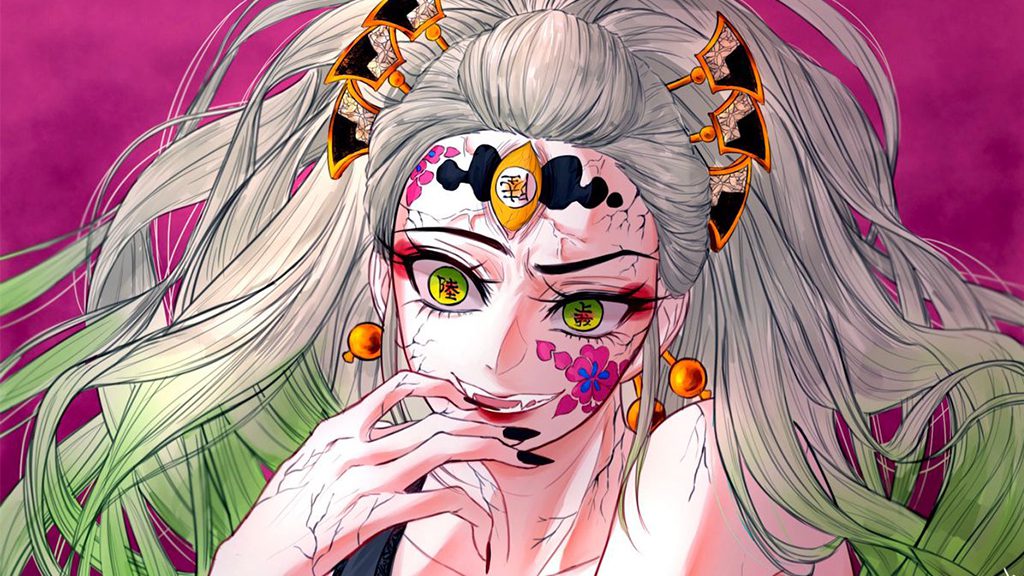 Tanjiro forgets to breathe against Daki

In the Swordsmith Village

Kamado Tanjiro and his friends, along with the Mist Hashira, Muichiro Tokito, visit the Swordsmith Village. There while training, Tanjiro and the group faces the Upper Moon Four, Hantengu. The demon has multiple personalities. Aizetsu, one of his personality, attacks Tanjiro with a surprise attack. His multiple spear-like projectiles would have impaled Tanjiro, but Genya shields him and takes the blow. Genya asks Tanjiro to finish the demon, and Kamado does so. Tanjiro evaded his death at the Swordsmith Village because of Genya. 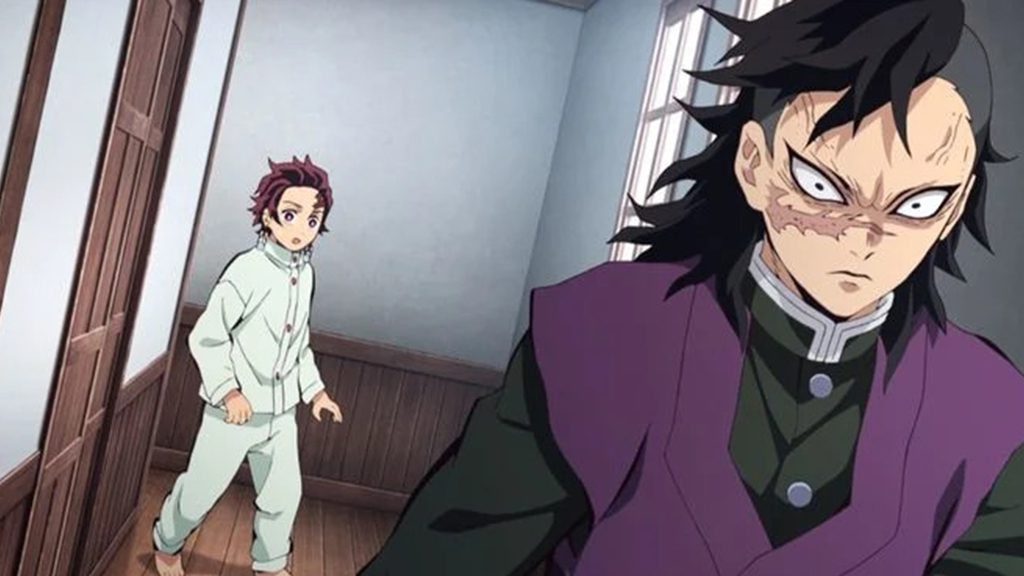 Genya will protect Tanjiro from dying.

The Final Battle against Muzan

In the last arc of the manga, Tanjiro and his friends face the Demon King, Muzan. This battle was the toughest battle in the history of Demon Slayer Corp. Many demon slayers lost their lives, including most of the Hashiras. Finally, after a long struggle, Tanjiro Kamado and his friends defeat Muzan. However, Tanjiro dies from the injuries. Everyone was sad about his death. But the young demon slayer suddenly opens his eyes but as a demon. Demonized, Tanjiro attacks his allies, but his friends hold him and inject him with the cure to turn him back into a demon. 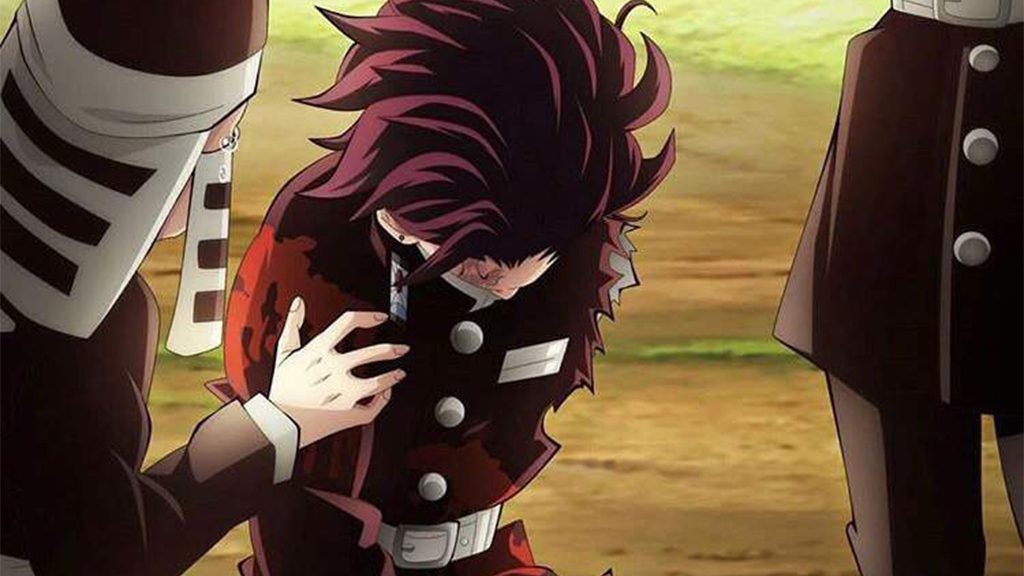 In the last chapter, we see the plot settles in modern-day Japan instead of the Taisho-era. We see that Tanjiro and his friends’ descendants. From that chapter, we can speculate Tanjiro married Kanao Tsuyuri, and together they had kids. We can also speculate that Tanjiro lived a long life, as he no longer needed to fight demons and might have died because of old age.