"What is my life..... in exchange for stopping.... a world-wide threat?" says Cathleen Bate 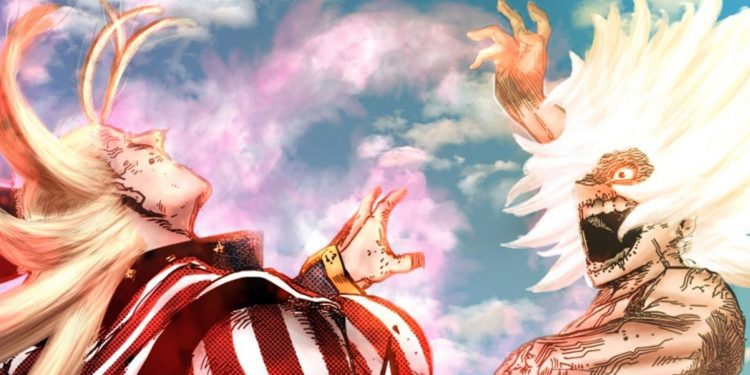 Having a stronger person with us feels so safe. We rely on them and are able to trust their abilities, love them, and can always have them back us! But what if one day came when they needed our help, and we couldn’t do much but instead be indebted to them? What if, instead of helping and saving them, when in need, they help us out and suffer instead? We’ll feel bad, won’t we? Pardon for being so philosophical when we are just here to discuss My Hero Academia. But know that this anime has lots to teach. With them around us, our feelings remain unforgotten! The reason why we started with such an introduction like this will be known by the end of the article. So make sure to read it until the end as we discuss, will America’s No. 1 Hero, Star and Stripe die in MHA or not?

My Hero Academia, a Japanese superhero manga-based anime, is written and illustrated by Kohei Horikoshi. This manga series is serialized in the Weekly Shōnen Jump with a total volume of 32. This series is set in a modern world where ‘normal’ people have superpowers, i.e., Quirks. Izuku Midoriya, a powerless (Quirkless) boy, is the main protagonist, with villains incoming as he starts his high school years.

Also Read:  My Hero Academia Should End in One Year, Says Creator

Who is Star and Stripe?

“The world’s strongest woman. She hails from the home of the heroes, the land of the free, and sits at the zenith of heroes all around the world,” says All For One.

As manga readers may know or at least imagine how Star and Stripe looks like, let’s also describe her appearance for the anime fans. Star and Stripe is a woman with a strong muscle build and has eight distinct hair tufts, which are almost similar to All Might. As she fights with Shigaraki, her elegant facial features highlight even her height.

Wonder what her Quirk might be? Star and Stripe’s Quirk is ‘New Order.’ Her Quirk allows her to impose sets of rules on her target. Though her Quirk has some limitations as well, New Order, while mixed with All For One, can become the biggest threat!

Cathleen Bate is actually from the Star and Stripe arc, which is the twentieth story arc and the second story arc in the Final Act Saga of My Hero Academia.

Also Read:  Is Shigaraki Tomura nerfed by America’s No. 1 Hero in MHA? Is All For One defeated in BNHA?

“A long time ago, I was saved by a Japanese Exchange Student. While I was with my family, near Santa Monica Pier, a runaway villain attacked us in our car. As I welcomed my death, I had only one thought left, ‘someone at least save my sister.’ Since then, those two long strands of hair have been engraved into my soul. He became my spiritual master! And so, in order to contribute with even greater force towards the maintenance of world peace, I style my hair just like his, but instead with eight long strands!”

Wonder who might the hero be who saved Cathy?

Yes, you are absolutely right! He is, without any doubt, Yagi Toshinori, popularly known as All Might.

While crying out for help, All Might saved Cathleen’s family and her sister. She, then onwards, wanted to be as strong, or even stronger than him. She even has eight hair tufts, just like All Might’s two hair tufts. She, henceforth, has always been moving forward so as to catch up to him. All Might is like a master to Cathleen.

Also Read: What is Star and Stripe’s Quirk? Quirk explained in BNHA

Will Star and Stripe die?

While fighting off with Shigaraki, Star and Stripe strived hard and fought back with all her might. She was able to fatally injure Shigaraki and even entrusted her will to the future heroes. Pardon for beating around the bush. But the reality is just that hard. Yes, Star and Stripe will die in My Hero Academia. Anime fans may not be able to relate much if you have not read the manga yet. But manga readers are already aware of this harsh truth.

While fighting with Shigaraki, in mid-air, Star and Stripe had the upper hand, at first. As the fight intensified, the tables were turned. But not so soon! Star and Stripe was not one to let an enemy go uninjured. She makes sure her target suffers. That’s just the right kind of mindset, isn’t it?

She landed one last blow on Shigaraki, but he came out undefeated. How? Shigaraki, or one might say All For One, decoyed one of his high-end Nomu, and he himself remained underground. He rose up to acquire New Order, but Star and Stripe didn’t dodge.

She let him have his way and indeed left us all! Fans didn’t hope for this kind of ending. However, Star and Stripe did not let this end yet. In chapter 334, Star and Stripe imposed a rule through her New order, that “New Order will revolt against the other quirks.” Shigaraki had his quirks rupture, and this will take him time and again to heal!

Cathleen left her fans not only sad but proud as well. Seeing how she planned all of it beforehand as if she knew everything would come to this.