Will Soo Ho Be Able To Dance His Way Out Of Trouble In ‘Snowdrop’ Episode 4?

Something tells us that escaping the dorm would not be so easy. 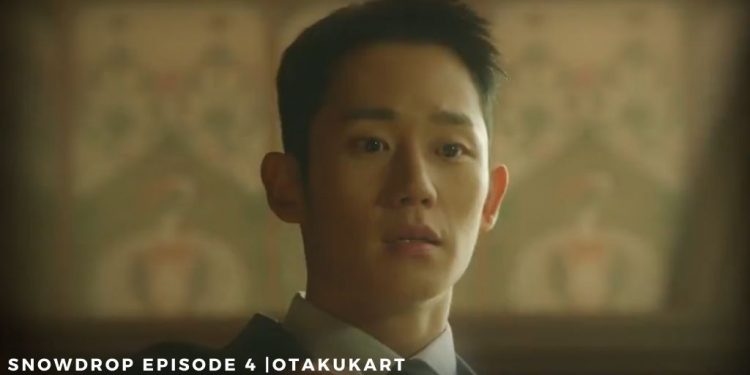 Fans are over the moon to watch Episode 4 of Snowdrop! There is no doubt that the premiere of the kdrama had impressed everyone. From the portrayal of the dorm life to the Jisoo and Jung Hae In‘s sweet romance, everything was absolutely amazing. Also, you will fall in love with the sets of the kdrama at first sight. The prestigious Hosu University Dorm, the beautiful sidewalks, and more have proved that the production team of Snowdrop had paid attention to each and every detail. Besides that, the audience had absolutely loved the cinematography of the k-series. The camera work adds a magical touch to the episodes of Snowdrop. Moreover, fans have been loving the friendship between the girls of Room 207. Although they are really different from each other, they don’t back down when it comes to helping their fellow roommates.

Honestly, the girls’ friendship is very precious. Knowing that they could get thrown out of the dorm any second, they still decide to help out Soo Ho at Young Ro’s request. However, the kdrama isn’t just filled with tense scenes but also has light-hearted moments that make it even better to watch. The audience has noticed that especially Kim Hye Yoon’s character Kye Bun Ok has been bringing smiles to their faces. Her character, who dreams of becoming a student again, is the eyes and ears of Pi Sung Hee. Fans couldn’t stop laughing when she came out of her room at night wearing the stolen items of the students and walked down the alley, and quickly went back to her room. Surely, the kdrama hasn’t failed to interest the audience. Don’t miss out on this extraordinary kdrama and check out the release date of Snowdrop Episode 4.

Snowdrop Episode 4 will be released on 26 December, this Sunday. Snowdrop is to entertain fans every Sunday and Saturday with brand new episodes at 11:30 PM KST. The audience has been loving the performance from the star-studded cast of the kdrama. Plus, they have been utterly impressed by Blackpink’s Jisoo’s acting skills. Being a rookie actress, her emotions and actions have been on-point throughout the first two episodes. Over time, she could also polish up her skills and may become of the most well-known actresses. Through the kdrama, Jisoo has proven that she is natural-born talent. In addition to that, Jung Hae In, Yoo In Na, Yoon Se Ah, Kim Hye Yoon, Jang Seung Jo, and Jung Yoo Jin have been perfect like always.

Where To Watch Snowdrop Ep 4?

Korean viewers can watch the episodes of Snowdrop on JTBC on Saturdays and Sundays at 11:30 PM KST. Although there has been mass protest from the Koreans side due to ‘history distortion in the kdrama, JTBC hops that all the misunderstandings clear with the future episodes. As for the International viewers, they can watch the kdrama on Disney+. Unfortunately, the kdrama is available in Disney+ in local countries like South Korea, Malaysia, Indonesia, Thailand, Hong Kong, Singapore, Australia, and New Zealand. Also, the release time of the 4th episode of Snowdrop is 7:00 PM in India, 8:30 in the United States, 1:30 PM in the United Kingdom, 12:30 AM in Australia, and 8:30 AM in Canada.

It looks like Im Soo Ho and Young Ro have come up with an escape plan in Snowdrop Episode 4. The last episode had left fans with a dreadful cliffhanger. While Young Ro was filling Soo Ho up with all of the details about the dorm, Pi Sung Hee, the dorm’s monitor, and Kim Man Don headed to their hiding place. Although Soo Ho and Young Ro manage to listen to their footsteps, there is no other way out of the cold basement. They were stuck! However, in the preview of the next episode, it looks like they were able to get away. How did they do that?

Other than that, it seems like Soo Ho will be suing the Open House party as a tool to get out of the girls’ dorm. But it looks like he will cause big mayhem before finally getting out. Will he be able to get out without getting caught? Don’t miss out on the episode to see what happens next.

How to Unfreeze Tiktok Account With Few Simple Steps?