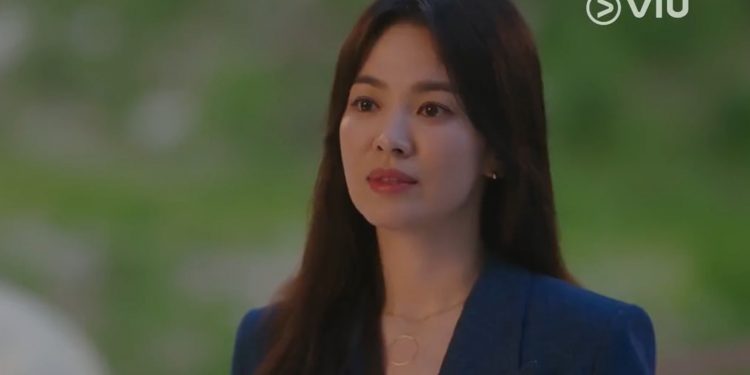 ‘Now We’re Breaking Up’ Episode 14 is on its way, and Young Eun has gotten a job offer from Olivier himself while Do Hoon is keeping Chi Sook on the ground. As they drive to work together, Chi Sook tells him he’s the only person who has liked her for herself. Chi Sook is also keeping an eye on Soo Ho, threatening him if he ever hurts Mi Sook again. While Jae Guk has asked for a month to love Young Eun all he wants. Both of them have decided to break up as their families depend on them. But Young Eun has another thing to worry about. The thought of Mi Sook gone is haunting her as she has no idea how’s she supposed to say goodbye.

At work, things have gotten a bit better as the last online fashion was a huge hit. While hearing about the offers Young Eun is getting, Kwang Soo is trying his best to make her stay. While Jae Guk is grateful to Young Eun as she unknowingly bought his picture. That inspired him not to give up on photography. While thinking about how Jae Guk has been there for her through the recent thought times, Young Eun asked Jae Guk if he’s like her to teat him with dinner. Going over to her house, they cooked together. Eating, Jae Guk told her that he’d have to empty his studio and only has a month to stay in the country. Trying not to let it get to her, they both continued enjoying their date night.

Setting up a meeting with Young Eun, Yoo Jung congratulated her on the success. With ‘SONO’s exit from The Hills and entry into the international market, the store hasn’t been doing that great. The board members told Yoo Jung to put her ego behind and look at the condition of the store. She had no other option to talk to Young Eun. But it didn’t go well. And as Young Eun got up to leave, Yoo Jung asked her if she’d be able to let Jae Guk go as she loves him so much. But telling her that letting go is another way of love, she left Yoo Jun speechless yet again.

Jang Ja, on the other side, is living her life, doing things for herself only. While her husband has no idea about how to do the basic chores, the friends meet up at Mi Sook’s house, picking up all the side dishes she made for them. As they spent the night together, Ji Min and Soo Hoo went to his mother’s house, knowing about the affair Soo Ho was having in the office. Mi Sook brought it up, telling her friends not to bring this thing up as Soo Ho has a life ahead of him. She’s just happy that it’s a person she knows. She even made kimchi for her and wants to make sure if she’d take good care of her daughter too.

‘Now We’re Breaking Up’ Episode 14 Release Date & What To Expect?

‘Now We’re Breaking Up’ Episode 14 will release on December 31, 2021. Asking Do Hoon to cancel his contract, Jae Guk told him that he was leaving soon and planning not to come back. Driving to work the next day, Young Eun and Jae Guk talk about what’s waiting for them at work. Acting as if everything is fine, both lovers move on to bid each other farewell soon. And Jae Guk’s mother has no idea about his Paris plans. While Chi Sook’s ex has done everything in his power to make her doubt Do Hoon. Not wanting to leave her behind, Jae Guk wants to ask her to come with him once again.

Where To Watch ‘Now We’re Breaking Up’?

‘Now We’re Breaking Up’ episode 14 will be available to watch on streaming platforms like Rakuten Viki and Viu.

Dex Fights For His Life in Dexter: New Blood Episode 8