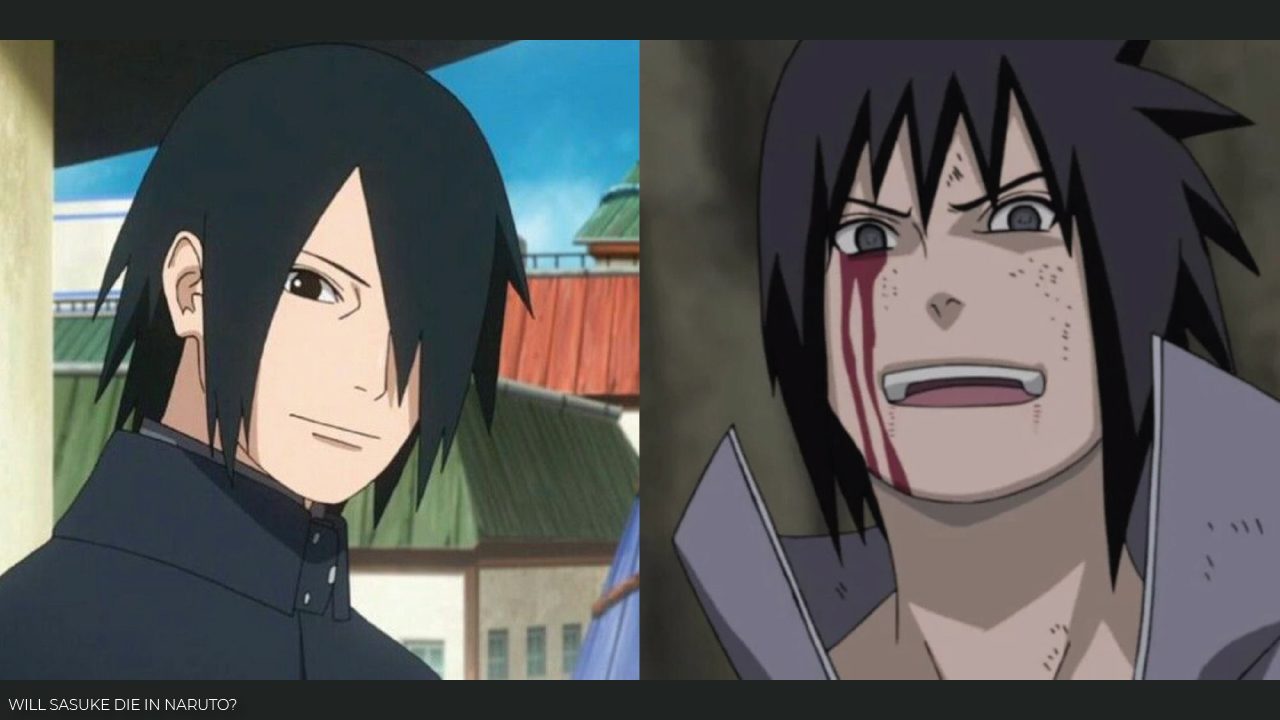 Will Sasuke Die in Naruto? Sasuke Uchiha is one of the strongest characters in Naruto and shows a massive development throughout the series. At several points in the anime, the character shines bright and becomes a force to be reckoned with. But what’s character development with no challenges? While he sometimes displays an overpowering force, at some points, we see Sasuke at his lowest, which makes us gape. Will Sasuke die? Will he survive the fatal blows that are thrown towards him? The questions never end as you binge the series from the top. However, it is just spice as such that makes watching shonen anime such bliss. A constant thrill is what every viewer desires to be entertained.

Sasuke is a member of the Uchiha clan who grew up with a terrible fate. His entire clan was slaughtered overnight by his own brother. He had lived his life vowing to avenge his clan after suffering from the trauma of the incident. Sasuke comes off as cold and displays high tsundere characteristics. He is always coming off with snarky comebacks, directed especially towards Naruto. Being an Uchiha, he is indeed very strong and possesses elite skills as a shinobi. Despite his cold nature, Sasuke would readily sacrifice himself for his teammates. Surprisingly, he has also tried to kill his teammates. Sasuke lives dangerously, and being a fan favorite, viewers are constantly worried, thinking he might die.

So will Sasuke die in Naruto? If you are new to the series, I bet you are filled with all sorts of suspicion. Here’s Sasuke’s dangerously led life summarised to give you a quick picture of your question’s answer.

Will Sasuke Die in Naruto?

Sasuke is one of the main protagonists of the Naruto series, and Masashi Kishimoto uses a thick plot armor around him. So no, Sasuke will not die in the Naruto series. However, he does come inches close to death several times, only to be saved at the last moment either with the help of his own skills or with someone else’s help. Throughout the series, Sasuke makes several dangerous attempts that could have killed him (sometimes in the worst possible ways). However, Kishimoto knows better than to kill off his main characters. Sasuke survives these horrible mishaps and grows stronger with time. Here are some of the moments when we thought we would never see the character again.

Sasuke’s earliest encounter with death came in the first few episodes of the series when he faced off against Haku. He activates his Sharingan to keep up with Haku’s speed. Haku changes his target from Sasuke to Naruto when he sees that Naruto is more vulnerable. When Haku attacks Naruto, whose chakra had depleted, Sasuke takes the blow instead by shielding him. Several of Haku’s senbon hit Sasuke, and he collapses. This was one of the first moments that made us wonder if Sasuke would die, and we almost thought that was the last we would see of him. However, it is later revealed that Haku had made sure that he had hit certain points in Sasuke’s body that put him in a death-like state. Naturally, he woke up later when the effects wore off. 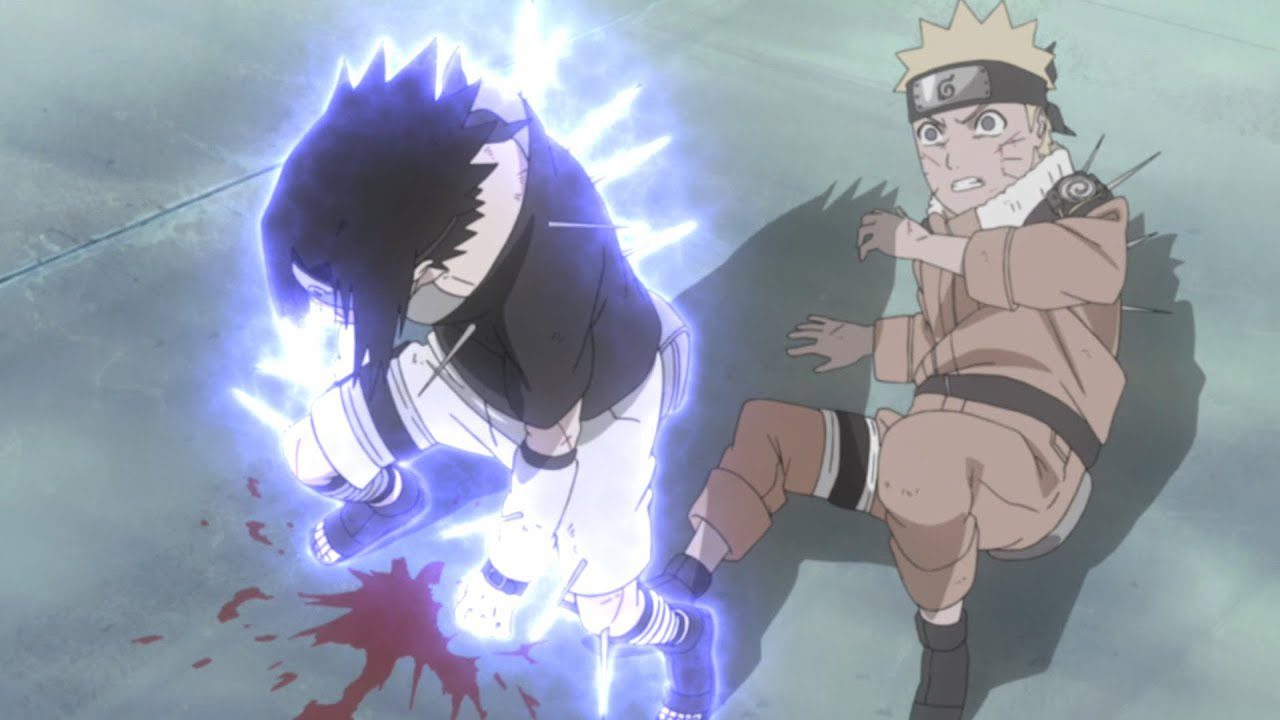 Remember that time when Orochimaru bit Sasuke? During the second phase of the Chūnin Exams, Orochimaru brands Sasuke Cursed Seal of Heaven after being impressed by Sasuke’s skills. He brands him by biting Sasuke’s neck. The tricky part here is that while the curse might give heightened abilities, the other times, the curse can even kill its recipient if it is not compatible with the body. Even worse, the compatibility rate of this cursed seal is a rough 10% which makes it all the more dangerous. The only way of getting rid of this cursed seal is by removing Orochimaru’s consciousness from the body, which is yet another tricky part. Luckily, Sasuke manages to get rid of it by using the Evil Releasing Method. However, despite being able to do so, he passes out from the pain. 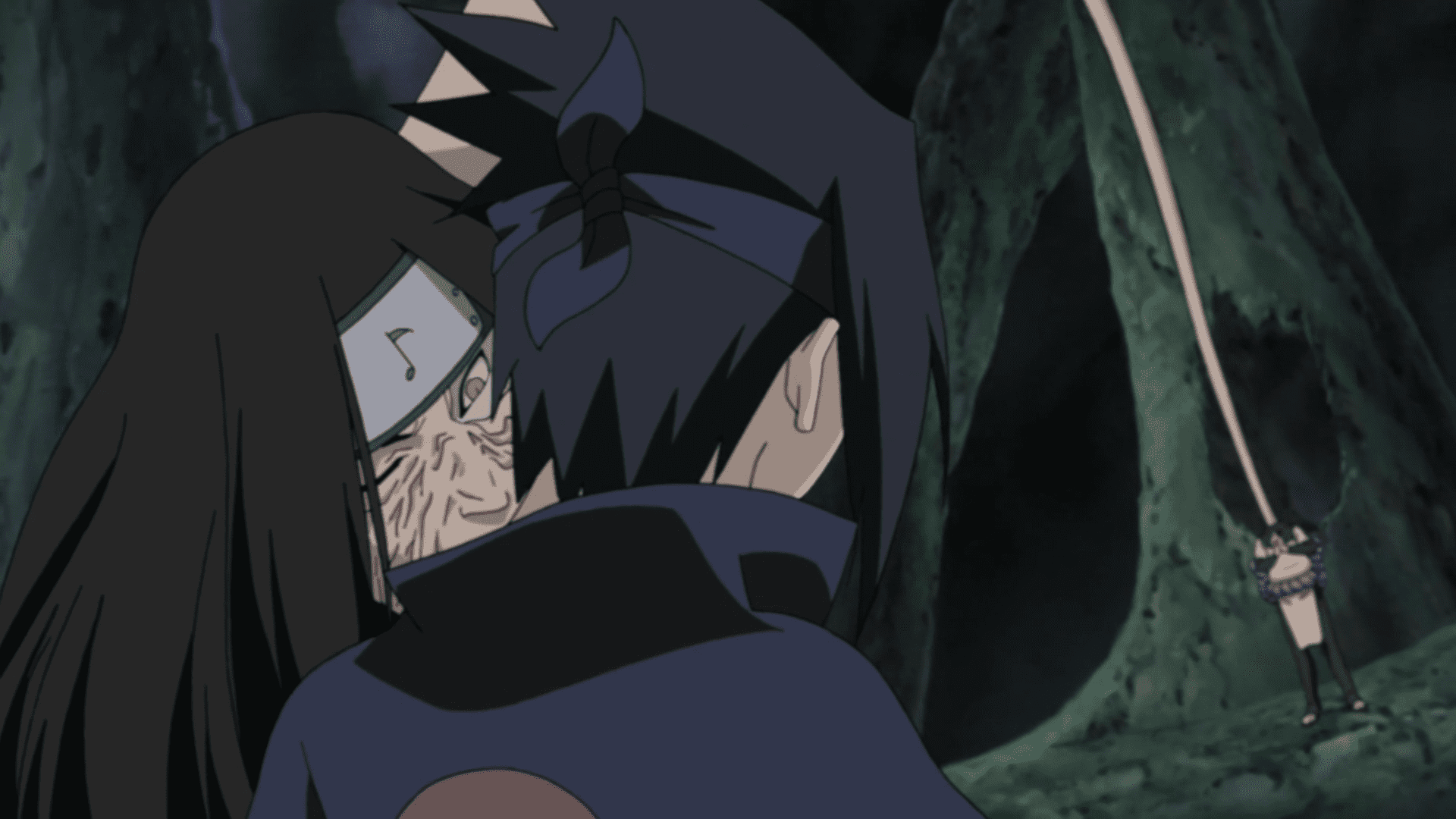 When Konoha gets invaded, Gaara escaped, and Sasuke goes after him to capture him. As he chases him, little did Sasuke know that he was about to face off against a jinchūriki. Gaara was transforming to Shukaku when Sasuke found him and attacks him with his enhanced abilities. Sasuke has trouble keeping up with Gaara and dodges his attacks until he finally makes use of Chiori. At one point, he even injures Gaara, but the latter continues to fight with his enhanced stamina. Using Chidori twice exhausted Sasuke, but he uses it a third time with the help of his curse only to get paralyzed. He could have perhaps died here had Sakura and Naruto not arrived at his aid at the right time.

To find Itachi’s location. Sasuke joins the Akatsuki for a while, and in his search, he comes against Deidara. Deidara and his explosives annoyed Sasuke enough, but that was the last thing that troubled him. Sasuke uses his Sharingan to see his microscopic bombs and tries faking his death to catch Deidara off guard. However, what Sasuke didn’t see coming was that his opponent was immune to genjutsu. Thus Sasuke gets trapped with C4 explosives but escapes after making use of Chidori. As he corners Deidara, Sasuke stops using his Sharingan and interrogates him about Itachi’s location. However, Deidara instead bombs himself using C0. Deidara dies, naturally, but Sasuke saves himself by an inch by summoning Manda and jumping off to the Ryūchi Cave. 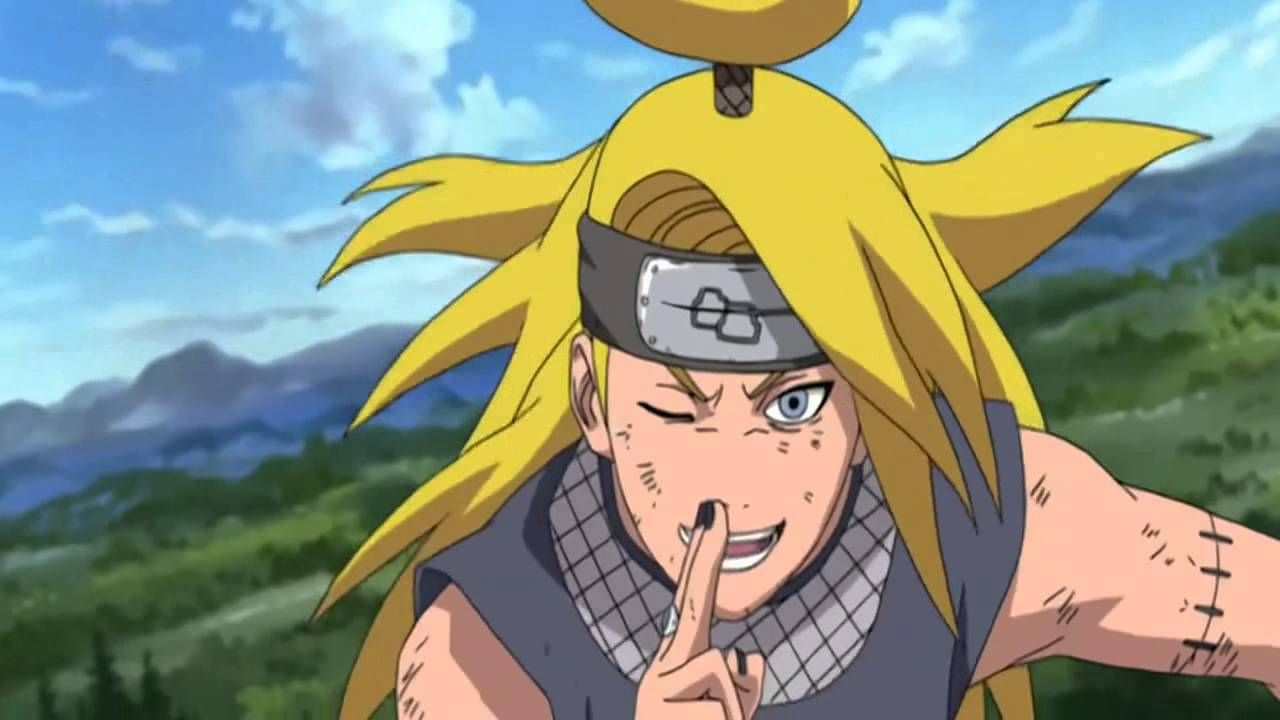 Another near-death experience in Sasuke’s life was his encounter with Killer B, who proves to be one of the toughest opponents in his journey. Killer B had full control over his tailed beast, and thus he could snap out genjutsu using the beast’s chakra. Sasuke uses Mangekyo Sharingan, but Killer B retaliates with equal enthusiasm using Lariat, his Lightning Release, and punches Sasuke. This injures him severely as his neck, chest, and several organs rupture. It was all thanks to Jugo that Sasuke was healed and thus survived this deadly blow. 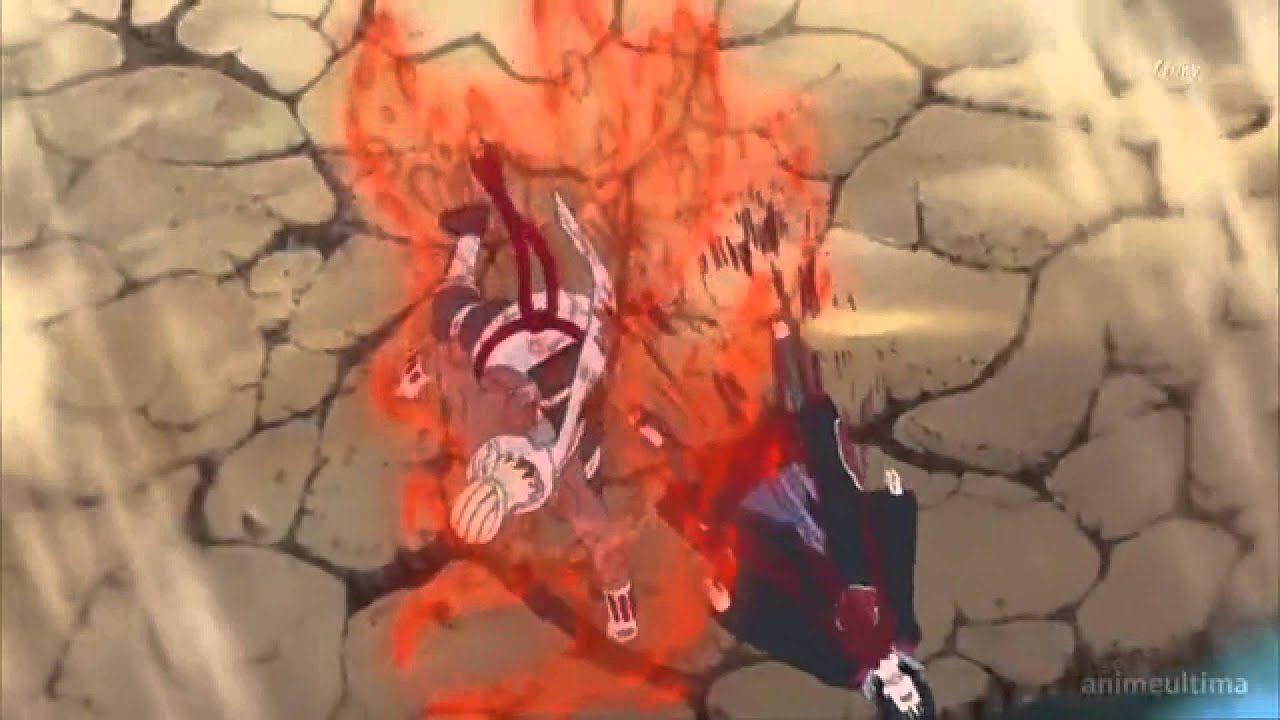 Killer B uses Lariat against Sasuke.

Also Read: Attack On Titan Watch Order: How To Stream The Anime In English Sub?

During the Five Kage Summit Arc, Sasuke meets Mizukage Mei, the powerful shinobi with threatening abilities. Sasuke might be a genius, but the way he has escaped death through the show gives us a strong feeling about the plot armor. As people continue asking, ‘Will Sasuke die this time?’, he continues to escape the clutches of death by the brink. A great example of this was his experience against Mizukage Mei. Mei could perform two elemental kekkei Genkai, the first being Lava Release and the other being Boil Release. She uses the latter against Sasuke. In this technique, she creates a corrosive mist from water and fire. This mist is extremely dangerous as it melts away anything it touches, including Sasuke’s Susanoo ribcage. It’s all thanks to Zetsu’s Spore Technique that drained Mei’s chakra, or he would not have survived her attack.

Madara was strong and had Godlike strength and abilities. Till the end, it feels high impossible to even imagine Sasuke or Naruto defeating him in a one-on-one fight. Perhaps the most ‘will Sasuke die?’ moment was when Sasuke did try to face him off one on one. Having received Hashirama’s chakra and a technique to overcome Madara’s senjutsu, Sasuke comes back to the battlefield. However, he is unable to even scratch Madara as he is found suspended in the air and stabbed with his own sword before he can make a move. Madara left him bleeding, and he would have bled to death had Karin not healed him on time. 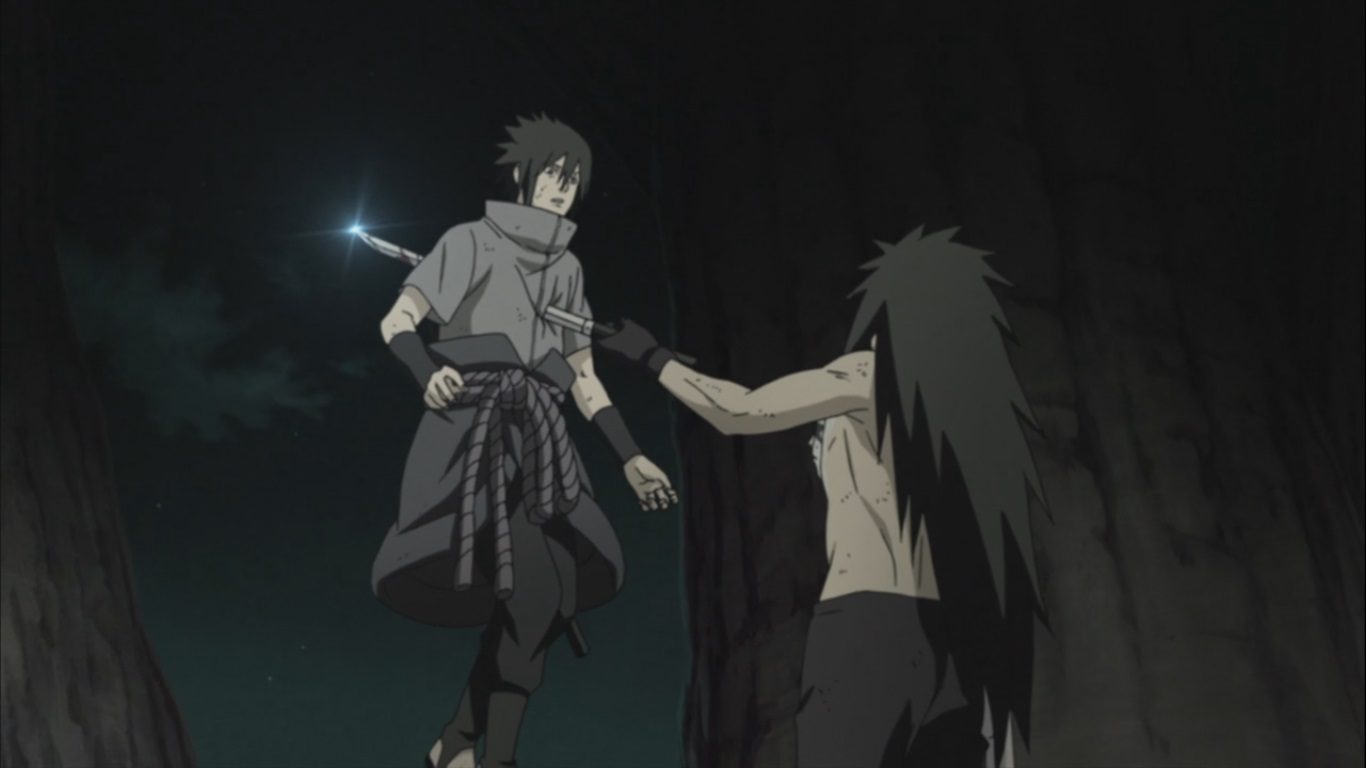 Also Read: How Old is Sakura Haruno in ‘Boruto: Naruto Next Generations’?