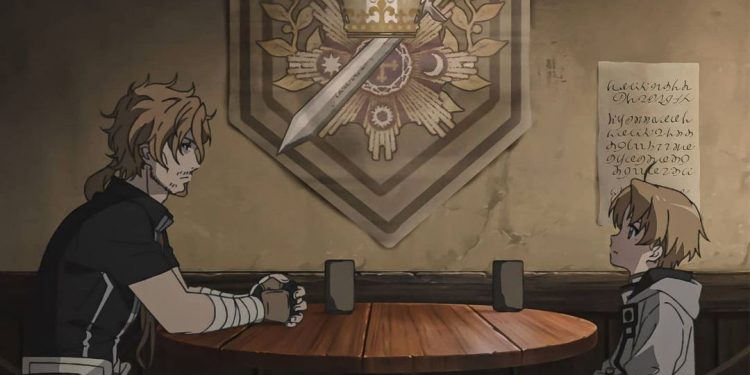 Rudeus and Paul were seen fighting in the first season. And after that, will Rudeus reconcile with Paul? It is difficult to say because a fight between father and son shows a lack of understanding between them. And this is one of our topics to discuss how they will reconcile and what they will understand from each other. So, please read the article till the end to know more about them.

Paul is the father of Rudeus, but in the anime, they look like a close friend who knows their taste in women. This type of different understanding shows their close bonding. It is an unnatural way to treat each other as a friend instead of father and son. Paul always wants that Rudeus must learn swordsmanship as he did so that he can fight any enemy without any problem. But Rudeus is interested more in learning about magic, so he always tries to conceal his presence from him.

No one will expect that they have similarities in thinking with the factors of opposite in personality. Paul Greyrat is the major supporting character, whereas Rudeus is the main protagonist of the anime series. In the Mushoku Tensei: Jobless Reincarnation, Paul is only with her daughter Norn Greyrat. Zenith, Aisha, Lilia, and Rudeus were none of them with him because of the teleportation incident. After that incident, they were all teleported to different regions.

Concile with Paul will be difficult to imagine because, as a friend, he is the person for Rudeus, but as a father, he was just a failure. Paul was thinking that his son is a self-centered guy who only thinks about himself. But the reality is the exact opposite, Rudeus always thinks about others, and there are so many examples. Rudeus was thinking that he will not reconcile with his father but loves his father. Now, it all depends on Rudeus, will he reconcile with Paul or not? Please read the full article to know about their reconciliation.

Will Rudeus reconcile with Paul?

Will Rudeus reconcile with Paul? Yes, he will reconcile with Paul, After all, he is his father. After the teleportation incident, Rudeus and Eris did not know that not only both of them, rather other people have also been teleported to different places.

Rudeus, Eris, and Ruijerd when coming to the place where Paul was living with other former members of his guild. During that time, they did not know they were at the same place. But after following a kidnapper, he accidentally meets his father. And now, Paul is not in a good shape as he was before. There is only one reason, his family.

After the teleportation incident, Paul was searching for his family members, but he found no one. He almost lost his will to find them, but after seeing Rudeus, he got some hopes. And he was expecting Rudeus to search Zenith, Lilia, and Aisha. But after hearing Rudeus’ story, he felt like his son is enjoying every moment with Eris. But Rudeus, as a responsible guy, wanted to take Eris to Fittoa Region without any trouble.

Paul did not understand his son’s feelings, so he sought on him because of a lack of understanding and then fought with him. But after Geese Nukadia explained, Paul understood that he should understand his son and not yell at him. Rudeus was feeling sad because of his relationship with his father. But after meeting again with Paul, Rudeus asked paul to forget about yesterday, just thinking that this is our first meeting after the teleportation Incident. And then Rudeus concile with Paul.

Where you can watch Mushoku Tensei: Jobless Reincarnation?

The father-son relationship is one of the important factors of everyone’s life. We should understand others, too, and this is one of the lessons that I learned from it. They reconciled after the fight, and this is one of the beautiful parts of the anime. If you guys planning to watch Mushoku Tensei: Isekai Ittara Honki Dasu and looking for some legit online streaming platform, then I have a surprise for you at the end of the article. So, just do not forget to subscribe to these platforms because this will help them to identify their customer, and after verification, you can watch season 1 without any interruption.

Here’s your surprise – Use these legit sites to watch Mushoku Tensei: Jobless Reincarnation.

Another Life Season 3: What is the Series About? Plot & Characters

When Does Luffy become the King of Pirates?