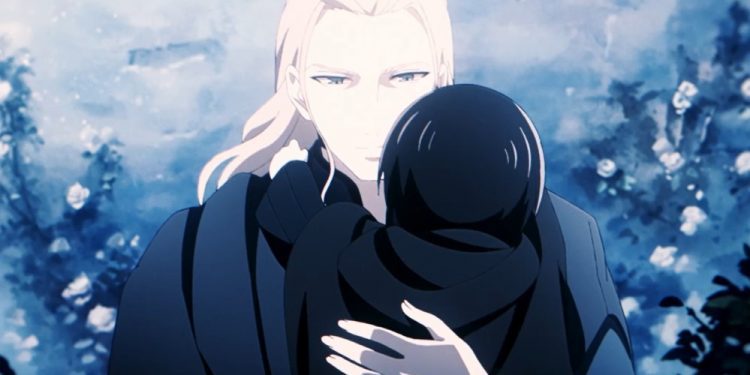 Requiem of the Rose King Episode 2

Requiem of the Rose King Episode 2 reveals the mystery behind the House of York and House of Lancaster. The House of Lancaster is well-known for the Prince fighting over the throne. That same throne was wrongfully usurped from the House of York. The Prince was killed for the crime of treason. Requiem of the Rose King has recently debuted, revealing the life of princes. Warwick talks with King Richard and swears on the white rose that King Richard will reclaim the throne. King Richard promised that he would return with a golden circlet in hand.

King Richard had a son and talked with him before leaving the city. He named that boy after his name. Richard knows that his father will save him one day. Later, Richard and Edward train sword combat together, and Edward wonders if Richard wants to surrender. William noticed that Edward was overwhelming Richard and told Richard to stop training since he might get hurt. Edward told Richard to go home with William. George challenges Edward on a horse race, and Richard feels left behind. Richard asks William to give him a horse since he wants to join the horse race.

William realizes that Richard is too young for a horse race and tells him that it is dangerous. But he agrees to escort him, and Richard realizes that he wants to help his father win the throne back from the Lancastrians. Richard arrives in the scary forest and sees the crows screaming. He realizes that his mother once told him about the witches deep in the forest. He wonders if he has arrived in that forest that his mother told him about. Richard’s mother warns Richard not to travel alone in that forest.

Previously on Requiem of the Rose King Episode 1

Richard remembers the day that he was left alone in that witch forest, and here the voices calling him. Mysterious creatures asked him if his mother abandoned and they called him a demon child. They also reveal that terrible incidents happened that wiped out the forest on the day Richard was born. Richard was surprised to hear the incidents that happened during his birth. They also told him about the upcoming age of misfortune. The mysterious creatures add that Richard was born from a blood-soaked demon who defied the will of God.

Richard learned about the prophecy that will happen in the future. On his way home met with the lady asking for help. Richard stopped his horse. The lady showed Richard something and said he was hurt. Richard went to look and found that it was a white boar. The lady told Richard to help, but he must treat the while boar well. Richard takes care of the whiteboard and heals its wound. The lady thanks Richard, who thinks they can enjoy the white boar for dinner. Richard arrives home with that white boar.

Edward and George talked to their mother, and she scolded them that they were dirty. George blamed Edward that he pushed him and made her dirty. Cecily told the two to bathe and change their clones. Richard was listening to everything. Wiliam confronts Richard and asks if he was hurt. Richard reminds William that his father taught him horsemanship. But he wonders when he will surpass his brothers. Richard wants to be stronger than his father. Richard knows that he is the son of Richard Plantagenet, Duke of York. After a few years, Richard learned that his father had returned from the war.

Requiem of the Rose King Episode 2 will be released on 16 January 2022. William and George welcome Richard Plantagenet, Duke of the York. They are glad that their father has returned. Richard joins them, and Duke realizes that Richard has changed. Richard told his father that his swordplay had improved, and he knew how to race using a horse. Later, Richard met with a French witch, Joan Arc, and talked about something. Let’s look at Requiem of the Rose King Episode 2 official details.