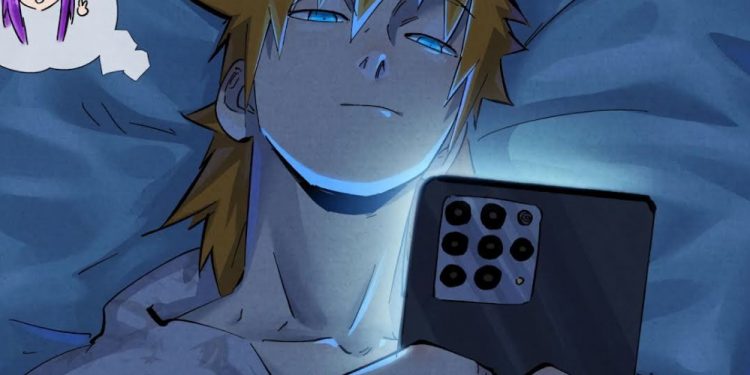 Tales Of Demons-And-Gods Chapter 358 reveals the mystery behind the Dragon’s Seal position. Xingyun also joins Long Yuyin and Nie Li, who reveals that Long Yuyin will be fighting for the Patriarch’s seat of the Dragon Seal. He asks Xingyun if he can help her achieve that goal. Xingyun realizes that Gu Bei is the heir of Gu Clan, and soon Yuyin will be competing for that. From Tales Of Demons And Gods’ latest chapter, Xingyun is glad that the heir of two Great Families is coopering with Nie Li.

The chapter begins with Nie Li using a smartphone fantasizing about a pink-haired girl. Xingyun realizes that he will be involved in the fight for the throne in the Ashen Flames Family. Nie Li wonders what Xingyun is thinking about and calls out his name. Xingyun didn’t hear Nie Li since he was thinking about his new contract. He realizes that doing business with Nie Li is fantastic. Xingyun told Nie Li to leave everything to him. Long Yuyin thinks that it won’t be challenging to establish a force by herself. She also revealed about the old comrades who worked for her father were retiring, and she was not fighting for Dragon Seal Family’s Patriarch.

But if she made her move, those comrades would help her. Xingyun admits that he will help Long Yuyin and grow their forces. Nie Li knows that Long Yuyin was the first choice to become the heir to her family. But the head of the family bestowed her with God Level Growth Dragon Bloodline Demon Spirit, and her father was a big shot. Xingyun realizes that is good news and Nie Li realizes that his master has recommended Long Yuyin as part of his plan to get Dragon Seal’s Position.

Nie Li knows that he has passed through various obstacles, but he still has to deal with Long Tianming. He talks about positions, and Xingyun suggests recruiting people. Nie Li agrees, and after three days, Xingyun returns with a troop of hundred of thousand warriors. Xingyun reveals that among those warriors, there are Star Realms and Heavenly Axis Realms. He adds that they will take the Diet Root as part of their plan; Nie Li promised they would receive 200 Spirit Stones when their plans succeed.

He asks Xingyun to send the message to his brothers, and Xinyun agrees. They realize that the Heavenly Fate Realm will receive an extra one hundred Spirit Stones even if one dies. But Heavenly Star will receive two hundred, and Nie Li will be the one who rewards them. Xingyun realizes that Nie Li is kind and thank him on behalf of his brothers. He admits that Nie Li has become a wealthy man since no one has ever offered what Nie Li offers. The warriors heard those offers and decided to follow those orders since they would get something in return.

Also Read: The Irregulars Reveals The Mystery Behind Sealing Ship In Chapter 520 of Tower Of God

Tales Of Demons And Gods Chapter 358 will be released on 7 December 2021. Gu Heng despises Nie Li, Gu Bei, and other warriors that work for Nie Li. He knows that the other side is blocking his path to get what he wants and want that position. Let’s look at Tales Of Demons-And-Gods Chapter 358 official details.