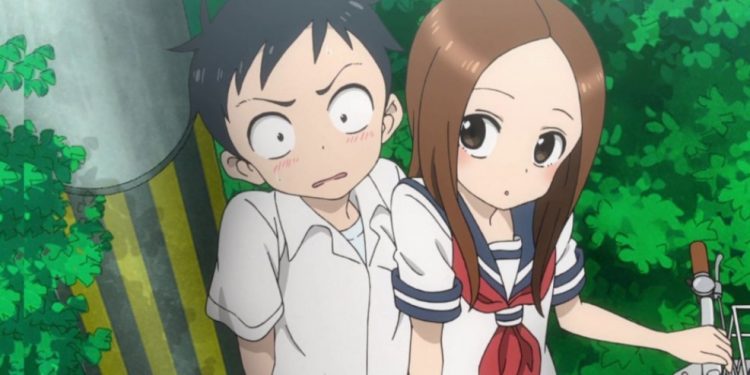 Teasing Master Takagi-san 3 Episode 2 reveals the mysterious life of Nishikata. Two mysterious students met at school and realized that everyone was lazy. The whole class was sleeping. The boy named Nishikata enjoys playing with a new toy that he bought, and Takagi saw that. Takagi wondered what Nishikata was doing, and he told her that he had bought it yesterday. He praises it, and guys in the athletic club always use it. Teasing Master Takagi-san 3’s latest episode reveals a boy who always troubles Takagi. Nishikata wonders if Takagaki is jealous of his new item.

Takagi can’t believe that Nishikata enjoys playing with his item because it is cool. Nishikata tries to show off and do things that Takagi will never expect. She keeps him busy and reminds him that he has stopped training. Nishikata wonders why Takagi always gets back at him. But he knows that he will get her soon and make her pay for messing with him. The students remain sleeping since it is a self-study period. The teacher was also sleeping, knowing it was hard to work on Monday. Takagi and Nishikata realize that they always get time to socialize while the others are sleeping every Monday.

Nishikata notices that Takagi continues while he exercises and wonders if she challenges him. He decided to keep up with her pace since he might lose. Takagi likes that since she only has to count and Nishikata will sweat doing the hard part. Nishikata realizes that he is at a disadvantage, but he has to keep up with Takagi. Takagi notices that and increases her pace while giving Nishikata a hard time. Nishikata realizes that his arm is tired and wonders if Takagi will get tired and stop.

He believes that she has no match against him even though he is tired since gripping is not for girls. But Takagi shakes his hand and asks him to let her try the grip strength thing. Nishikata thought they were having a gripping contest, and he realizes that he met with Takagi the other day, and they also shook hands. Nishikata was shocked to hear what Takagi told him that night. Nishikata keeps on seeing different worlds with Takagi and wonders if those are illusions. He tries to snap out of it but faces many challenges.

Nishikata wonders what is happening since he sees many things and different places simultaneously. He hears Kyunko talking with him and wonders how Kyunko got there since he was with Takagi. He saw Takagi swimming, but she didn’t get out when she dived inside the water. Nishikata wonders if Takagi is drowning, but an angel gets out of the water and asks if he is looking for Takagaki. But stay the chubby girls and boys and refuses. The teacher introduces a handsome student who says, “come here, baby,” talking to Takagi.

Teasing Master Takagi-san 3 Episode 2 will be released on 15 January 2022. Nishikata wonders who that punk is that arrives and charms girls. When he tries to stop that punk, he toches the tail of a cat that scratches his face. Nishikata also meets with cowboy Dandy and gets scared. He wakes after falling from a chair and realizes that he dreams about summer vacation. Let’s look at Teasing Master Takagi-san 3 Episode 2 official details.

Also Read: My Hero Academia Chapter 340 Delayed: Will The Pro Heroes Encounter The League of Villains?.