Finally, Kang Ro Seo and Nam Young begin living under one roof. However, with different personalities, the two always end up bickering. To earn money, Ro Seo starts a mobile bar. However, her business will face new troubles with Nam Young being Alcohol Prohibition Inspector! 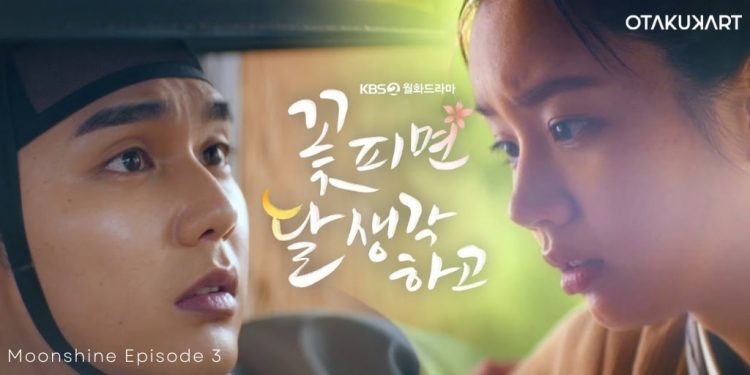 Moonshine Episode 3 is releasing soon! Finally, Nam Young and Kang Ro Seo’s romantic comedy has begun. After their chaotic meeting, both bicker without missing a beat. Maybe living together will make them understand each other’s world. As much as Ro Seo, Nam Young also bears the weight of his responsibilities to carry his family’s name. However, Ro Seo’s appearance will make him realize the emotions, freedom he never felt before. It will be interesting to watch how they fall in love with their opposite personalities!

The latest episode reveals the second female lead of the drama, Han Yae Jin. Although she and Ro Seo get off on the wrong foot, Yae Jin seems to take a liking to Ro Seo. It will be great if they become friends than the typical kdrama female leads who fight for the male lead’s attention. Furthermore, the episode shows Reo So starting her own small alcohol-selling business. Meanwhile, Nam Young also faces troubles at his new workplace, but he will not rest until he gets acknowledged and will continue capturing the liquor sellers. Therefore, Moonshine Korean drama Episode 3 will continue the cat-mouse game between Nam Young and Kang Ro Seo!

Ep 2 of When Flowers Bloom, I Think of the Moon reveals Nam Young and Ro Seo finding that they will be living under one roof. Their days continue with little bickering until Ro Seo learns about Nam Young being Inspector. Thus, she immediately hides her homemade liquor! Meanwhile, Nam Young discovers the young man who stole his horse, who turns out to be Crown Prince. Due to Lee Pyo’s order, Nam Young faces problems at his new workplace, the office of prohibition. Still, he accepts the challenge of finding five liquor sellers to get acknowledged by the head Inspector.

To earn money, Ro Seo begins selling her alcohol only to get her plan spoiled by Nam Young, who is arresting all liquor sellers. Thus, she comes up with a new idea and starts a mobile bar, and begins selling alcohol with her friend, Cheon Geum. Their business grows pretty good, but there is a brutal liquor maker who wants to monopolize the whole market, and for that, he is willing to go any length; even killing does not seem foreign to him. While selling alcohol, Ro Seo, once again, meets the young man who saved her before, aka Crown Prince. By the ending, she gets chased by the prohibition office’s gangsters and Nam Young, who eventually catch her but do not recognize her because of her mask. Thus, Moonshine Korean drama episode 3 will reveal Nam Young searching the masked liquor seller!

Moonshine Episode 3 will be released on 27 December 2021 at 9.30 pm KST on the KBS2 channel. After their chaotic meeting in the first episodes, Nam Young and Kang Ro Seo have discovered they will be living under one roof. However, things do not seem to work for them. Whereas Nam Young is worried about losing his innocent to Ro Seo, Kang Ro Seo is concerned about her mobile bar. How will the two continue living under one roof with such a circumstance?

The preview of Moonshine Korean drama Episode 3 is already out! It seems Nam Young will find the hidden stack of alcohol. But due to the regulation, he will pour it down all in a river. However, even after completing his mission, it seems Prohibition Inspector Kim Seok Won will not accept him. After all, he has received the order from Crown Prince Lee Pyo to make Nam Young resign within a month. At the same time, Ro Seo will ask him to move out. He seems puzzled by her sudden change of attitude to leave the place.

On Buddha’s Birthday celebration, the curfew will be lifted for a day. All villagers and nobles can drink liquor to their heart content. It also means alcohol will be in high demand. That way, Kang Ro Seo can earn more than her daily making. The preview also shows Han Yae Jin will meet a handsome young master with whom she seems to have fallen in love. Meantime, Nam Young will continue searching for the masked liquor maker and will ask Kang Ro Seo’s help if she knows that person. Maybe he will finally find out that person is none other than Kang Ro Seo herself! Hence, Moonshine Episode 3 will show the next part of this hide & seek game!