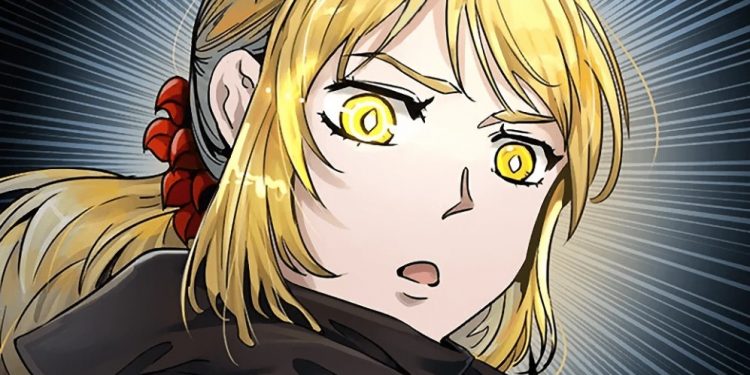 Tower Of God Chapter 524 reveals the mystery behind the Tower as the Players try to finish the game. Evankhell has survived her last battle as the Zahard Army joined the battle to fight with the hostages. She talks with the enemies and reminds them not to come near her. Meanwhile, at the Warp Gate inside the Lyborick’s Mothership, Kallavan vows to Lyborick using all of his strength. Lyborick thinks Kallavan jokes with him since he thinks Kallavan has lost a lot of energy and struggles to stand up. In Tower-Of God’s latest chapter, Candidy was impressed when seeing the battle between Lyborick and Kallavan.

Meier gets worried and asks Candidy whose side she supports, Lyborick or Kallavan. Lyborick is also impressed that Kallavan has caught his attack again, and he knows that will happen, but it would explode. He uses Lethal Technique Lightning Spear: Tormenta Lanza against Kallavan and asks him if he thinks he is untouchable since he knows he is potent and never expects him to be this much stronger than he thought. Lyborick thinks that the attacks he prepared are enough to pierce Kallavan.

He adds that he wants to know how many spears he must prepare to break Kallavan. Yu HanSung praises the two and says they are incredible, but there is no time to watch the two brawl since they can destroy the gate as they continue to battle. Several Lightning Spears appear, and Lyborick calls out Company Commander Kallavan, asking him if he has surpassed that level after focusing everything on a single attribute. But he is not worried even though his talent is different from Lighting Spear Technique, but no one should underestimate him.

Previously on Tower Of God Chapter 523

Lyborick talks about the Attribute of Shinsoo that he has preserved, and it would have been of no use if there is no electric attribute. He unleashes “water vapor” and shows it to Kallavan. Kallavan notices that the Shinsoo around him is rising and wonder if it is vaporization. But it looks like a mist, and Lyborick admits it is vaporization since it takes all the water within the Shinsoo. Lyborick reveals what will happen if he decomposes the steam of Shinsoo overflowing with electricity with his electric attribute that also would have discharged incredible energy of electricity, and it is over.

Yu Hansung asks Ms. Lefav if they can destroy the gate using any means with a single strike. Ms. Lefav admits that the gate cannot be destroyed easily with Shinsoo attacks due to its barrier. She believes that a potent monster like Evankell can break through those barriers and destroy the gate simultaneously; Ms. Lefav reveals that she has her way of solving problems like that. She believes that if she uses “Lefav-Faust,” which is well-known for destroying machines or buildings, it can neutralize barriers.

Ms. Lefav thinks that Lefav-Faust can work against the gate since it can pass through any barriers. She unleashes it, and Yu Hansung says it is gigantic. Candidy notices that, wonders what Lefav is doing, and realizes that Lefav wants to destroy the warp gate. She told them to stop Lefav, and Meier decided to help. Yu Hansung told Meire not to interfere. But Meier told her that she was scrub. Yu Hansung thinks that Meire’s behavior deserves a punch that will teach her not to mess with everyone. They both fight, and Candidy also interferes.

Tower Of  God Chapter 524 will be released on 2 January 2022. Yu Hansung sees that coming and warns Ms. Lefav. Lefav told her not to worry and realized that she had to destroy the other side to break it to the ground. The pilot reveals the connection to Gate no.2 is protected. Perseus realizes that the gate from the other side can be destroyed and wonders what will happen when they are warping. Let’s look at Tower Of God Chapter 524 official details.