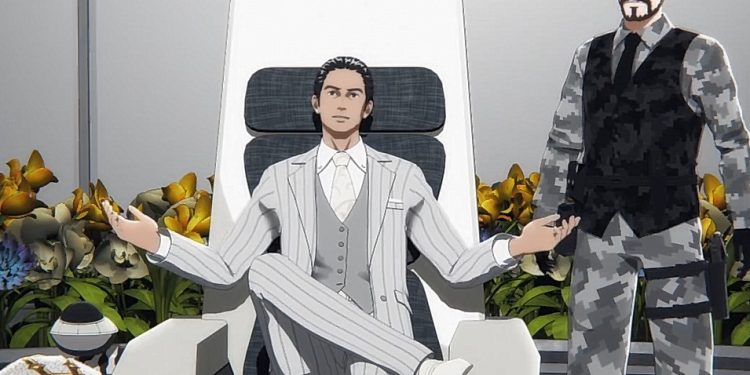 Tesla Note Episode 13 reveals Botan’s father, killed on a special mission. Team Temura heads out to retrieve the Shards of Tesla after finding the Oliver and Ryo are the traitors who stole the Shards of Tesla. Ryo almost killed Botan’s grandfather since he wanted the passcode to open the vault. The team used a parachute to land on top of the enemy’s airship. Kuruma and Mickey landed safely, but Botan’s lost control of her parachute and landed on the other side. In the recent episode of Tesla Note, Kuruma worries about Botan, who told him that she had found the entrance.

Himi told Botan to enter, and Kuruma thought she would not be safe if she entered alone. But Himi told him that it would be better to quickly find Tesla’s Shards to use different entrances. Oliver and Ryu believe that Mission T is a bunch of fools who won’t locate them. They know that they have to reach under the satellite orbit, and the boss will activate the Shards of Tesla. Mickey and Kuruma enter from the other side of the airship and realize they have to disguise themselves.

They saw two guards, took them out, and then wore their outfits, thinking no one would recognize them. Botan arrives at the ceiling, and grandfather wishes her good luck. She saw an opening and saw two soldiers and one guy wearing a white suit sitting on the chair with a trigger near him. Botan notices that the white suit guy is Japanese and wonders what his name is. She heard one of the minions call him  Mr. D and realizes that her grandfather told her about Mr. D. Botan learns that Mr. D is Damio Yamato, a powerful secret agent.

Botan realizes that her grandfather told her that her father is Mr. D. She noticed that Mr. D was torturing his workers and talked about his wealth. One of the soldiers brought tea, and Mr. D scolded him to put the brand’s milk that he dislikes. The guy wanted to make another tea bu Mr. D told him that he was demoted and he would drink the tea since it would be wasting food if they took it away. Botan can’t believe that she has a father who treats his workers like that. On the other side, Ryo feels something and tries to knock the soldier near him.

Ryo told that soldier that he knew his identity and he was Kuruma. Kuruma took off his mask and admitted that it was him. Ryo decides to take Kuruma down, but Kuruma fights back. Mickey also meets with Oliver, who passes him buy when Mickey walks away, Oliver realizes that the guy has the same footsteps as Mickey. He told Mickey to uncover himself since he knew that it was him. Mickey removed the mask and fought with Oliver. Inside the ceiling, Elmo appears behind Botan, but he messes up when he punches her and falls inside the room.

When he punched her, he missed and hit the ceiling; Mr. D wondered what was happening. They saw Elmo rolling on the ground with a girl wearing a secret agent suit. Mr. D asks the girl what she wants, and Botan tells him that she is here to stop him. She reveals that Mr. D is her father and can’t believe that. Mr. D reveals D stands for Danger, and he is Bonjiri, who killed Botan’s father. Botan gets sad, and Bonjiri activates the Shard of Tesla after noticing that Botan is morning for her father’s death.

Tesla Note Episode 13 will be released on 26 December 2021. Botan gathers her emotion and decides to stop Bonjiri. But Elmo fought with her, and Himi told Botan to head to the passage since they had five minutes to ruin Bonjiri’s plans. Elmo chased Botan and Kuruma decided to help Botan. But Ryo chases him, and Oliver also chases Mikey on the other side. Let’s look at Tesla Note Episode 13 official details.