The Yellow Flash of Konoha 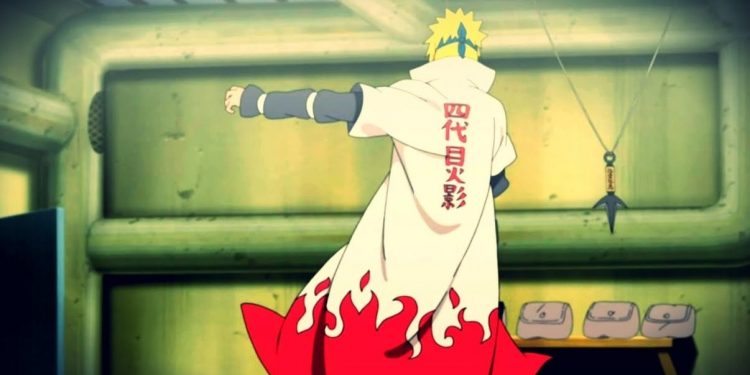 Throughout Naruto, we come across snippets of Minato Namikaze as the Fourth Hokage. In addition to being known as “Yellow Flash,” Minato is Naruto’s father, He was one of the greatest ninjas who played an important role in the 3rd Shinobi War before becoming the Hokage. Sensei to Kakashi, Obito, and Rin, he influenced them as a mentor. Though the most crucial role he played was when Kurama, the nine-tailed fox was let loose on the night of Naruto’s birth.

We come to know more about Minato and his past in Naruto Shippuden. It was rather sad that such a legendary ninja’s fighting style was only known through words in the first half of the whole series. But as the story progresses we get the bigger picture of what a great ninja Minato truly was. Because of this, I bet we’d agree on one thing: we would pay to see a series called “Minato – Naruto’s Preceding Generation”.

From the very first episode, we know that the Fourth Hokage died by sacrificing himself to save the village. The entire story of how he dies is revealed in Naruto Shippuden. Long story short, Minato Namikaze and Kushina Uzumaki sacrificed themselves when they had no other options in order to save the village and their son. However, even with them gone, they still continue to protect Naruto.

It is known that Kushina was the medium, or jinchuriki, that held the nine-tailed demon fox within her. It was important for her to be protected during the time she was pregnant with Naruto. Especially during childbirth since the seal that sealed the demon was at its weakest during this time. On the night of October 10, Kushina gave birth to Naruto.

This happy moment was cut short when a guy wearing an orange mask (Tobi) shows up. He steals baby Naruto from the hands of Minato who at the moment was preparing to strengthen the seal. Unfortunately, after being put in a difficult situation that caused him to teleport with the baby, Tobi kidnaps Kushina in order to pull the nine-tailed demon fox out of her. Meanwhile, Minato returns to the secret location with Naruto. He leaves the baby there and then relocates to save his wife who was seconds away from being killed by the Nine-Tails. Here, Kushina reveals that Tobi plans to summon the nine-tails in order to destroy Konoha. After dropping Minato off to the soundly asleep Naruto, he prepares to join the battle.

How did Minato Die?

At this point, the Nine tails had already been summoned inside the village. Over here, Minato and Tobi get into a fierce one-on-one fight. Soon Minato proves why he is called the “Yellow Flash”. On the other hand, the Nine-Tailed Beast was preparing to launch the Tailed Beast Ball on the village. Minato comes up with a plan and teleports the beast, along with Kushina and Naruto outside the village. Kushina then uses the Adamantine Sealing Chain, a technique specialized from the Uzumaki clan, to hold the tailed beast in place.

It is known that when the tailed beast is taken away from its medium, the medium death is inevitable. Since Kushina knew she only had a few moments left, she pleads with Minato to reseal the beast inside her so that he can die with her but Minato had other plans. Considering that Tobi would return someday to destroy the village, he decides to utilize the chakra of the nine-tails by stealing half of it in baby Naruto and the other half in him. For this, he used the Death Reaper Seal. A catch to this seal is death, with the soul being trapped forever in the reaper’s belly.

The nine-tailed beast, however, noticed Minato’s plan and decided to kill Naruto before Minato could seal the other half of the beast’s chakra in Naruto. This resulted in Kushina and Minato jumping in to shield their baby from the claws of the beast. Their death was a bittersweet moment as they said goodbye to their son with some precious words. They also sealed a bit of themselves in him using the remaining chakra they had. This would let them meet Naruto again when he needs them the most. Although Kushina still had some life left in her to tell the third Hokage about Naruto, Minato had sadly passed away.

Naruto first gets to meet Minato when he is about the remove Kurama’s seal during the battle with Pain. Over here, Minato reveals that he is Naruto’s father. In the midst of this sweet moment, Naruto tries to punch him while accusing him of sealing the beast within him. After Naruto calms down, Minato then tells Naruto about how proud he is of his son and his growth so far. He is also glad that Naruto has met some good people in his life that have helped him grow. Minato then tells Naruto about the purpose of the nine-tails’ chakra in him. Unfortunately, Minato did not have too much chakra left in him so he had to tell Naruto goodbye a little too soon.

Minato’s reanimation takes place during the fourth Shinobi war however, it is seen that he could’ve been reanimated much earlier. The first reanimation was going to take place when Orochimaru fought the third Hokage. At the beginning of the fight, he summons three coffins. The first two are the reanimation of the First and Second Hokage respectively. Minato’s coffin was the third one. However, the Jutsu was cut short as Minato had made a deal with the Reaper.

It was again Orochimaru who summoned Minato during the fourth Shinobi war as an ally that could help in the war. Minato, again, plays an important role in this war as he once again saves the village by relocating the attack that the ten-tailed beast was going to launch. In the war, he uses both the chakra of the nine-tailed beast, now called Kurama and half of the chakra that belongs to Naruto. This battle was an intense one as Minato loses both his arms in the fight.

Let’s be honest, this is the scene where we all bawled our eyes out. As the war came to an end, so did the reanimates’ time. Minato was one of them. Before leaving he wishes Naruto a happy 17th Birthday. As he is leaving, Naruto has a heartfelt conversation with Minato’s soul. The former gives an emotional message that his father would later convey to his mother. This is the scene where Minato “dies” for the second and final time.

Continue Reading: How Old Was Obito When He Fought Minato? The Untold Story Of Love And Despair