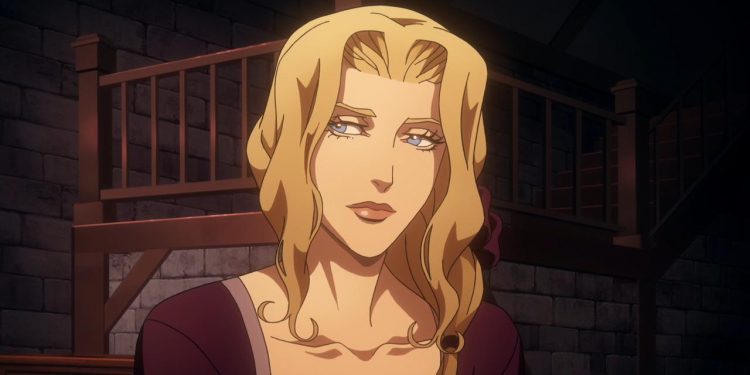 The anime Castlevania features the story of Trevor Belmont, the last survivor of his clan, who is on a quest to stop, catch and kill Dracula Tepes from destroying humanity. Now, why does Dracula want to do that? Is it because he wants unlimited blood without having to hunt down his prey? Or was it because of revenge? For that, we will have to look into the life of a woman called Lisa Tepes. Will Lisa Tepes die in Castlevania?

Castlevania was first released as a video game with many titles. The first game is said to have been released on 26th September 1986. Since then, it has gained many fans for its dark and intriguing storyline. The anime Castlevania is mainly based on Castlevania III – Dracula’s Curse. It also adds some other elements from other games in its franchise. Also known as Akumajo Dracula in Japan, Castlevania was developed by Konami Holdings Corporations. It was published on Platforms like Nintendo, Konami Entertainment, and Hamster Corporation. It was animated by Powerhouse Animation Studios and has been released on all Netflix platforms as its original animated series.

Who is Lisa Tepes?

Although she doesn’t have much presence in the animated series or video games, her influence on the storyline is a very strong one. To answer the question in my introduction, Dracula wages war against humanity for her sake. No, she doesn’t persuade him to do so. His motives are indeed purely based on revenge because she was killed by human beings.

Lisa Tepes was the second wife of Dracula Tepes, whom he loved the most. She wasn’t a vampire but was a human being. Her romance with Dracula was heavily based on the fact that Dracula and she shared a comfortable bond, despite being of different species. She is also the mother of one of the main protagonists, Alucard. Thus, he was the half-human and half-vampire child of Dracula and Lisa. Alucard, however, has different opinions from his father. Interestingly, both these opinions are inspired by the person connecting them – Lisa Tepes.

She also appears to have a knack for better judgment and a strong need to help humanity. In her quest to find answers that would save humanity, she meets Dracula and treats him like how she would treat any other human being. Judging by whatever is known about her and from her influence on Alucard, she seems to be a gentlewoman who deeply cares about the people around her. Lisa was initially seen as a brave woman who loved science. She also had a dream of becoming a doctor, which she did.

Yes, Lisa Tepes will die in Castlevania. Lisa was initially seen as a brave woman who loved science. Although she was living in the 1400s, she wasn’t afraid to show her curiosity for things related to the field of science. She was a very smart woman, but her intelligence would someday cause her doom. Her demeanor also managed to create a place in Dracula’s heart that was reserved for loving her and living as a human being for her sake. But it was all in vain when she was brutally burnt at the stakes.

Lisa was taken by a priest in Targoviste, Wallachia, in 1475 and was accused of Witchcraft. This was because they found pieces of equipment of science in her house that weren’t commonly found anywhere else at the time. Although she said that she was a woman of science, they claimed that the devil had helped her and, of course, that she was serving him in return.

Also Read: Will Carmilla Die In Castlevania? The Fate Of The Queen Of Styria

When she was dying, she yelled out, pleading to Dracula if he was listening, not to take revenge on these people for they too have their own share of burdens and do not know what they are doing. She wanted Dracula to keep living as a man since he loved her as a human being. But sadly, the death of Lisa, the only person who made him know love, enraged the wrath in Dracula. He gave the people of Wallachia one year to make peace with what they had done. After a year, he warned that he would be back with an army from hell to destroy them.

Alucard is seen persuading him not to do so as he is ready to mourn her death with him, but Dracula disagrees. Thus, Alucard is determined to follow his mother’s last words. Whereas Dracula is determined to avenge her death. This came together to create the main conflict of the anime.

Does a Tragic start lead to a Happy Ending?

Indeed it does! At the end of season 4, Lisa and Dracula are seen together. Perhaps neither of them knows how they are alive again. We can assume that their souls were freed after Death’s death. They are seen talking and being grateful for their resurrection. Dracula also claims that he wishes to travel with her from here on.

Will Colt Grice Die in Attack On Titan?