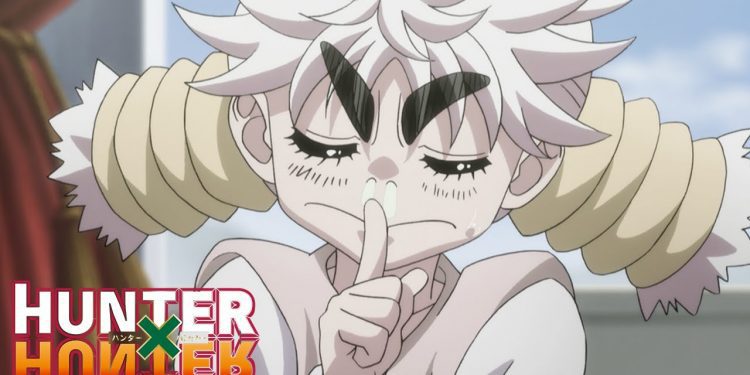 Hunter X Hunter is a series that takes place in a world where there are officially licensed “Hunters” who are capable of hunting down beasts, treasures, and even people if required.  The Chimera Ant Arc is one of the most discussed and well-known arcs of the series. It deals with a Chimera Ant Queen who has offspring that are part ant and part whatever creature she last feeds on. In this arc, she has half-ant and half-human children, who have a fascination with eating Humans. The Ant Kids eventually realize that eating Hunters allows them to have the same Nen as the Hunter they eat. This is the main problem that the Hunters have to deal with in this Season of Hunter X Hunter.

Introduced in the sixth official arc of the Hunter X Hunter series, Komugi is an expert in the game of Gun-gi. Komugi is summoned by the Chimera Ant King, who wants to duel her in the game she specializes in. We see in this season that Komugi maintains her status as the best Gun-gi player in the world by repeatedly winning against the Meruem, the King. No matter how powerful he is and how the other humans tremble in his presence, Gun-gi is focused only on her game with only one purpose in mind – Never to lose in Gun-gi against anyone.

Warning!!! This Article is Not Spoiler Free!!

Making her first appearance in the Chimera Ant Arc, Komugi was a blind Gun-Gi player. Coming from a family of twelve in the Republic of East Gorteau, Komugi was the country’s representative for Gun-gi and became a professional player to earn money for her family.

Komugi was one of the few geniuses in Nen and was able to use it without any prior training in it. But her use of it was limited to Gun-gi. She had placed the heavy expectation of never losing a game ever, and even going as far as promising to commit suicide if she ever were to lose one.

Komugi met her match when she was summoned by the new king of East Gorteau, the Chimera Ant King. He claims to have practiced playing Gun-gi and is ready to face the national champion. However, he loses every match against her. As the two keep playing without any breaks, the King slowly changes from being a ruthless monster to someone who acknowledges humanity, thanks to Komugi herself.

Also Read:  How Many Episodes are there in Hunter X Hunter?

What was the Relationship between Komugi and Meruem?

The Chimera Ant King, Meruem was the most powerful kid of the Chimera Ant Queen. He was a very cruel and brutal king. But his personality changes as he plays Gin-gu against Komugi. He initially starts respecting her as a strong opponent in Gin-gu but slowly develops feelings for her as they keep playing.

When Meruem challenges Kumogi, he puts forward a bet that if she loses she would have to give him her left arm. He figured that she would fear this bet and succumb as other humans do. But when Kumugi shows no fear and says that she’d rather lose her head than her arm if she loses the game, Meruem gains immense respect for her. As an apology, he tears his own left arm out and presents it to Komugi.

As the two keep playing against each other, people start to notice the effect Kumogi has on Meruem as he becomes kinder and less arrogant. There are instances where he saves her life after intending to kill her. Even during his last minutes alive, Meruem chose to spend them with Komugi. He peacefully passed away in her arms after their last game of Gun-gi together.

How Does Komugi Die?

Komugi dies by Meruem’s side after their last game of Gun-gi together. Meruem was poisoned by Netero after he defeats Netero in episode 126 of the Chimera Ant Arc. After the battle, Netero pierces Meruem’s heart with the Miniature Rose poison which is highly contagious.

While the fight between Meruem and Netero was in action, Komugi was in recovery from being hurt by Zeno’s Dragon Drive. During this time, she’s kidnapped by Gon and put under Killua’s surveillance. She was kept hidden from the King as he was recovering from Amnesia. The guards wanted their old King back who wanted world domination, and not someone who spent his entire time playing Gun-gi. But Meruem eventually remembers Komugi and asks for her so he could play against her in his final moments.

As Meruem dies in Komugi’s hands, the radiation of the poison affects her as well. She calls him by his actual name, something Komugi had never done before, and declares that they will always be together. She passes away shortly under the effect of the Miniature Rose Poison.