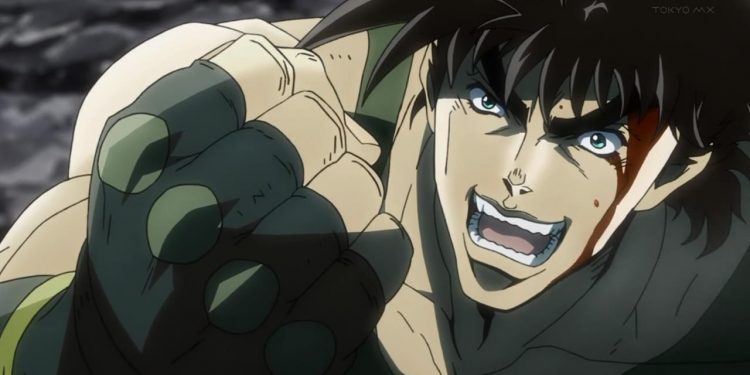 There are, as of now, eight parts to Jojo’s Bizarre Adventure that takes place at different points in time. Every part has a new protagonist; however, there are cases where a character re-appears in more than one part. This article will, hence, be talking about Part Two’s protagonist, Joseph Joestar. Joseph was born on September 27, 1920. He makes his debut, in Part II, in episode 10, ‘New York’s JoJo,’ and he again appears in Part III’s, episode 27, ‘A Man Possessed by an Evil Spirit.’ He appears even in Part IV, episode 84, ‘Let’s Go eat some Italian Food.’

The manga-based anime JoJo’s Bizarre Adventure, also known as JJBA or JoJo, is written and illustrated by Hirohiko Araki. Being the second longest-running manga in Shueisha, JoJo did not have its official TV series until October 6, 2012; designed by David Production. JoJo’s genre spans action, mystery, horror, thriller, supernatural, tragedy, comedy, and, of course, adventure.

Joseph appears in Part II when he is 18 years old. In Part III, he is over 67; in Part IV, his age is considered to be 79. In Parts V and VI, he ages from 81 to 92, respectively. For some fans to believe that he is dead is because it is very rare to be alive after 92. Whereas, others believe that he might still be alive because Araki, the writer of JJBA, once said: “Joseph might still be alive, albeit a little dumber.”

Who is Joseph Joestar?

Joseph Joestar is the main protagonist of JJBA’s Part II and an ally in Part III and IV. He is also the second JoJo, after his grandfather Jonathan Joestar, of the JoJo series. Joseph may look a bit similar to Jonathan, his grandpa, but is actually the polar opposite personality-wise. Jonathan was kind and was always a gentleman, but Joseph, on the other hand, is a wily delinquent! He is also the first character in the JoJo series to have mastered both Hamon and Stand.

Joseph has inherited his Ripple and its capabilities from his grandfather, Jonathan Joestar, and his mother, Lisa Lisa. During his fight with the Pillar Men, Joseph has demonstrated several attack techniques similar to his grandfather’s. Because Joseph was playful, as he grew older, he started neglecting responsibilities and also his Ripple training (he hated the words “work hard”). He eventually loses his capability to do the same things he could when he was younger.

Is he really dead or still alive?

Some fans believe, and they had actually accepted the fact that Joseph is no more. Having been more than 92 years and still being alive is a rare case, is what the fans think. Joseph is actually one of the fan-favorite characters and also Jonathan’s grandson. He is indeed the most favored, after Jotaro, Joseph’s grandson. In the Stardust Crusader, episode 46, when Dio stopped time and caused a mess, he didn’t even budge while killing off his so-called brother, Jonathan’s, grandson Joseph in front of Joseph’s grandson Jotaro! A bizarre moment indeed, isn’t it? A fan said, “after appearing in Part IV for a few episodes, Joseph never comes on-screen or in any chapters. Hence he could have died of natural causes offscreen.”

Now for the part that he is alive, many fans are actually positive about it. Mainly because Hirohiko Araki himself said, “Joseph is alive, albeit a little dumber.” Well, it’s good and all that he is alive that this much is also only assumption! Araki is the only one who knows if he will come back or not. A fan declined the fact that Joseph has died, explaining how Joseph actually ‘survived death two times’ and how he is ‘only’ 92 that there are still cases he could have used his Hamon and still be alive. There are many theories as of yet, but no one is certain about anything.

Top Gear Season 31 Episode 5: Another Legendary Lamborghini In The Limelight