Isshiki Otsutsuki is the main antagonist in Boruto, the spin-off series to Kishimoto's Naruto anime series. His chakra levels are immense, almost too much for a human body to contain. He makes several appearances in the anime to to further his own agenda of consuming Earth's chakra fruit. Even after being almost dying twice he tries to keep on living by putting Karma seals on another stronger vessel. 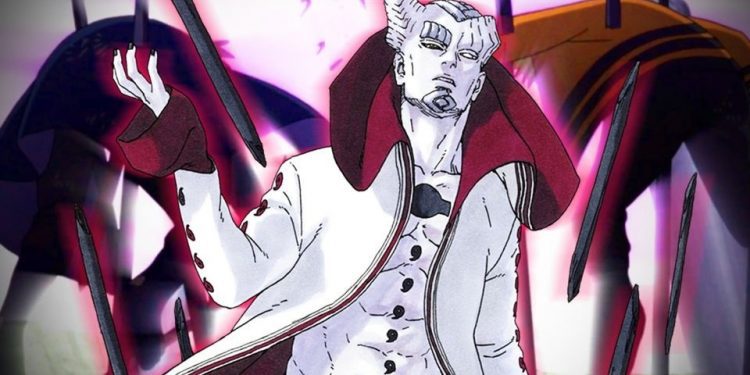 Isshiki Otsusuki has been one of the main antagonists in Boruto, the spin-off sequel to Kishimoto’s Naruto anime series. He is a celestial being, just like the other Otsutsuki clan members, and he arrives in pair with Kaguya to harvest and consume the chakra fruit of planet Earth. He appears many times within the series to fulfill his own selfish desires and is the main villain of the Boruto series.

He made his debut in the series as Jigen, the monk. However, we learn in a later episode about his true form. He had only used Jigen’s body as a vessel to live on when his own body grew weak. He is central to Boruto’s story and has engaged in quite a lot of battles.

Naruto and Boruto fans got to watch an excitement-filled and extravagant duel between Naruto in his Baryon Mode and Isshiki, the main antagonist in episode 217 of Boruto: Next Generations. During the fight, Naruto can be seen mixing his chakra with Kurama’s to get the upper hand on Issiki. It’s a dangerous process as the Baryon Mode drains his life force which can end up being life-threatening for the Hokage. Naruto’s new powerful form shocked even Sasuke and Isshiki.

So who is Isshiki Otsutsuki?

Isshiki first appeared in the anime in Boruto episode 202. Isshiki Ōtsutsuki was part of the Otsutsuki clan’s main family and also the leader of Kara. He arrived on Earth a thousand years ago with Kaguya. They both had the same objective of planting a god tree and harvesting the chakra fruit of the plant. Members of the Otsutsuki clan have always arrived in pairs. Like Momoshiki and Kinshiki, Isshiki also arrived with Kaguya. They were tied together.

Kaguya learned that because of her lower rank, she would be sacrificed to create the chakra fruit, which Isshiki would then consume. After learning the truth, she betrayed Isshiki and destroyed his lower half. Weakened, Isshiki had no other choice but to live off another’s body. He found Jigen, a monk, and shrunk himself to get into his ear. At that particular point in time, Isshiki did not even possess enough power to implant the Kama on him, so he had to live like a parasite and absorb Jigen’s nutrients.

With time, Isshiki grew stronger and could finally embed a kama on Jigen’s body. Isshiki, through his control of Jigen’s body, became the leader of Kara and got hold of a new ten-tails seedling. Isshiki used himself via Jigen as the sacrifice for the ten-tails to make it bloom into a God Tree.

However, Isshiki could not revive himself through Jigen as his body would die within a few days. Instead, he tried to cultivate Jigen’s body as much into an Otsutsuki as he possibly could to be fed to the Ten-tails for its growth. Isshiki holds so much power in his body that Jigen’s body, even with all the various enhancements made, had difficulty containing it. Although Jigen was very powerful in his own right, his body or prowess was not much when compared to Isshiki. This is why Isshiki could not use his power to the full extent while still in Jigen’s body.

Even with his limited power in Jigen’s body, he was able to almost defeat Naruto and Sasuke, the two strongest ninjas in Konoha. He managed to seal Naruto in a different realm and almost killed Sasuke. Amado had once painted a picture of Isshiki as so powerful that he could single-handedly destroy Earth if he was given the opportunity to harness his true powers.

He could use the Byakugan, which gave him a 360-degree vision, and he could see through any object with it. He can also see the Chakra system of others with this ability. He possesses insane amounts of strength, which could be credited to his special jutsu called Sukunahikona. He had another ability up his sleeve called Daikokuten, with which he could store objects in a pocket dimension, where he could stop time.

Isshiki was capable of much more compassion in comparison to the other Otsutsuki clan members. As a leader of Kara in Jigen’s body, he often showed comradery with the others. He was willing to negotiate with Koji and Amado even after their betrayal cost him Kawaki. He also trusted Boro and Code with guarding the Ten-tailed beasts and the sealed naruto. When Boro failed to contact him, Issiki actually looked concerned about it, proving that he did value the other Inners.

Isshiki Otsutsuki died at the hands of the combined forces of Naruto, Sasuke, Kawaki, and Boruto. Naruto played the biggest role in killing Isshiki by using his Baryon Mode. He reduced his life span to mere minutes. Because of that, Isshiki had to reincarnate himself into the body of Kawaki to keep himself alive.

However, he was unable to put the Kama seal on Kawaki’s real body which in the end caused his demise. Kawaki had tricked him into thinking that one of his shadow clones was his real body. So, Isshiki had made the mistake of placing the Kama seal on the shadow clone of Kawaki instead of his real body. Kawaki kept doing this till Isshiki lost all the time he had left, and his body crumbled into dust. Isshiki was forced to reincarnate in Jigen’s body, but he was too weak of a host to holdIsshiki’ss huge chakra. This is why he had such less amount of time to place the Kama seal on Kawaki.

In the end, Isshiki failed to complete this task and, therefore, perished away.