One Piece, one of the best ongoing shounen animes tells us the story of a boy named Monkey D. Luffy who is looking for the world's most legendary treasure. He forms his crew called the Straw Hats Pirates. Going Merry was the name of their first ship and she was also an actual crew member.

by Shreya Chowdhury
in One Piece
Reading Time: 4 mins read
0 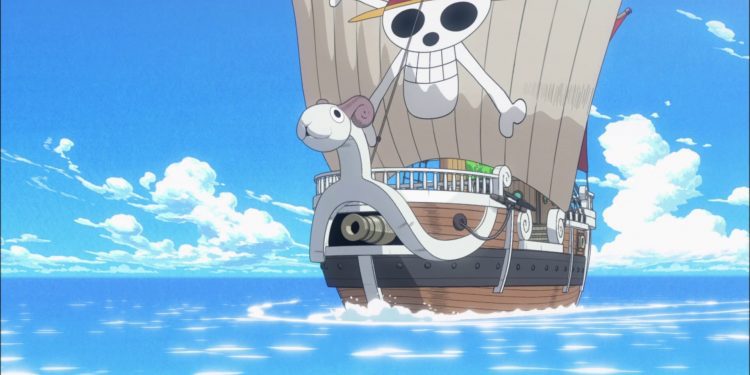 One Piece is one of the longest-running shounen anime out there as of now and one of the best too! The anime series has been one of the most demanded animes by fans on online video platforms, as well as being on the top five list in Japan in terms of viewers ratings. Produced by Toei Animation, the anime series is the story of Luffy, who formed his pirate crew named Straw Hats and set out to search for the world’s ultimate treasure called One Piece.

Monkey D. Luffy receives the power of elasticity after eating a powerful Devil Fruit. He had decided to become a pirate after turning 17 and was the last one amongst his siblings to leave his island. Throughout his journey, Luffy met many new people and made many friends who joined his crew.

Going Merry was a caravel ship that served as the main transportation of the Straw hats pirates throughout their journey till the Enies lobby arc. Kaya’s servant Merry had designed it for Kaya as a luxury vessel. The ship was then gifted to the pirate crew for defending Syrup Village against the Black Cat Pirates. The ship was named after its creator.

Over time, the crew loved the ship so much that the ship developed a life of its own and became an actual crew member. The ship had four canons as its armaments and a jib, and a steel rudder. However, the canons were rarely used as the Straw Hat pirates preferred hand-to-hand combat or running away. Going Merry later got three tangerine trees from Bell-Mere’s orchard as a memento of Nami’s home.

Will their ship Going Merry perish?

Unfortunately, the answer to that question is yes. Going Merry received a Viking funeral in chapter 430. When the crew traveled through the First Half of the Grand Line, the ship received more and more damage. She gained several metal patches to hold her together at certain places that could not be nailed back together again, like the mast, figurehead, etc. Going Merry’s figurehead was a sheep, and Luffy loved to sit there most of the time while sailing. This figurehead was broken for the first tie during their encounter with Laboon, the whale.

Luffy had gotten so emotional about it that he could not stop himself from attacking the whale. Sometimes, the sheep figurehead would show signs of expressions just like a regular human being when they felt emotions. These expressions ranged from comical to sad.

Similarly, several spots of the guardrail were damaged and even went missing. To fix this, the crew had to patch them up with wooden boards despite their lack of knowledge about carpentry. By the time they reached Water 7, the keel of the ship was damaged. The keel was irreparable, which became the last straw for Going Merry’s doom.

However, the ship was extremely strong and durable. When Kaku had released the ship to drop straight down a waterfall, Going Merry did not smash apart but landed on her side. She was undamaged from the fall. Amongst the Straw Hats Pirates, Iceberg would usually patch her up, and he did so this time as well.

Despite suffering from all these attacks, she carried the Straw Hats Pirates to Ennies Lobby, sailing through the treacherous storm in Aqua Lane and back before finally falling apart. Throughout the series, Going Merry got bombs hurled at her, suffered being smashed up in different parts but still continued to serve the crew till her last moments.

As the crew reaches water 7, the ship breaks apart under its own weight because of all the prior damage. Her bow end folded towards the sea, and her keel snapped. Luffy begs Iceberg to patch her up again like last, but this time he can do nothing to help.  Iceberg tells Going Merry that she was a wonderful ship as well as a wonderful crewmate. Luffy realizes that it is time to move on, so he decides to give her a Viking-styled send-off.

The other members get on one dinghy boat while Luffy takes another one. He stays behind with a torch and sets fire to the hull of Going Merry. The episode shows everyone’s emotions as they say their final goodbyes to their ship and even their precious moments together. They thank her for her service during all of their adventures together and finally leave with heavy hearts.

Which Episodes to watch?

The Going Merry ship has been a fan favorite from her introduction in the anime. Those who are unfamiliar with One Piece may find it weird to be so attached to a vessel; however, the ship was not just an inanimate object. The ship had her consciousness and was always addressed as ‘her’ by all the members of the Straw Hats Pirates. You can watch the heartbreaking last moment of Going Merry in Episode 312.

The anime series is available on most online video platforms like Crunchyroll, Hulu, Netflix. etc.

Also Read: Will Brook Die in One Piece? Can the Musical Swordsman Lose his Life?