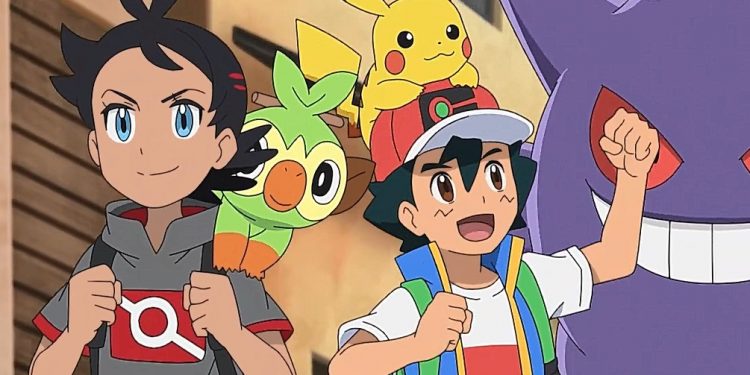 Pokemon 2019 Episode 93 reveals the mystery behind Lateral Town, but the next episode will get delayed for weeks. After dealing with the Ghost Train incident, Satoshi and Goh had another adventure and arrived in the Galar region to take care of a few errands. They deal with Ghost-type Pokemon and defeat Mirakuge. Later the duo arrives in Lateral Town in Galar. In the recent episode of Pokemon 2019, Satoshi talks with Sakuragi about Ganger and how he can make Ganger Kyodaimax. Sakura reminds Satoshi about visiting the Gym Leader of Lateral Town’s Ghost Gym. Satoshi decided to go there and learn from Gym Leader.

Goh and Satoshi arrived at scarry Ghost Gym, but they couldn’t find Mr. Onion. Satoshi suggests calling Mr. Onion’s name, and they are surprised to see the masked boy they met inside the Ghost Train. He is glad that the boy is Mr. Onion, but he closes the door since he hates it when people call out his name. Later he let them in, and Goh realizes that Onion is trying to tell them something. Onion realizes they wanted to talk about Ganger and tells them to visit the stadium. They met with Saito, who asked them if they were here for a battle on their way.

Satoshi reveals that he brought Ganger for Kyodaimax training, and Onion will help them. The training began, and Satoshi unleashed huge Kyodaimax that made Ganger grows big. But Goh notices that Ganger is different from Kyodaimax Ganger, and Ganger is trying to reach that level. Satoshi tells Ganger to try hard, and it will work out. Onion reveals that Satoshi’s Ganger can only Daimax, and even if they force Ganger, he won’t evolve into Kyodaimax. Ganger hears that and shrinks since he is disappointed.

Onion realizes that there is a way for Ganger to evolve and tells Satoshi about drinking Dai Soup which will help Ganger evolve into Kyodaimax. Goh searched about that on his Index Data. He finds that when a Pokemon drinks Dai Soup made from Dai Mushroom, it can evolve into Kyodaimax. Satoshi decides to feed Ganger Dai Soup and asks Onion to find Dai Mushroom. Onion realizes that the Dai Mushroom is in the forest facing Ghost-type Pokemon. Satoshi decided to go there even if Ghost-type Pokemons tried to stop them.

The trio arrives at the forest, and Goh realizes that the forest is scarier than he thought. They also pass by the Ghost-type Pokemon’s graveyard. Onion reveals that they can get Dai Mushroom near the graves. He points at the Dai Mushroom, and Satoshi gets excited that it didn’t take them long to find them. But they have to deal with Sunnygo Coral Pokemon Ghost-type to get that. Onion told Goh and Satoshi that they must not touch Sunnygo or curse them. Satoshi suggested his idea and decided to fly using Ganger to get Dai Mushroom.

He managed to get Dai Mushroom, but he dropped his hat out of excitement, touching Sunnygo. Sunnygo wakes up and scares Goh, but Satoshi apologizes for waking Sunnygo. Goh realizes that Sunnygo might curse Satoshi and uses Monster Ball to capture it. But the Monster Ball lands between sleeping Sunnygos, and Satoshi wonders how they will get it back. Satoshi thought they could make Dai Soup, and Onion told them they needed other ingredients. They collect all the ingredients and face different types of Ghost Pokemon and fight with them.

Pokemon 2019 Episode 93 will be released on 14 January 2022. Satoshi, Goh, and Onion escape the Ghost forest and realize that making Dai Soup is not easy. They also met with Dragon-Type Pokemon that almost took Sarunoru away. Later they went home and cooked Dai Soup. Ganger eats that Dai Soup and evolves. Pokemon 2019 has delayed the upcoming episode for a few weeks. Let’s look at Pokemon 2019 Episode 93 official details.