Will Fiber Hero: Best Jeanist Die In My Hero Academia?

One of the major causes of anxiety has been the morbid fate shown of the Fiber Hero: Best Jeanist. So, what is the truth about the death of No. 3 Hero? As we answer the loaded questions asked above and go Plus Ultra with our deliverance, we want you to sit tight through the tumultuous journey. Good day, folks!

Who Is the Fiber Hero: Best Jeanist?

Fiber Hero: Best Jeanist is a pro-hero and one of the most powerful characters in the My Hero Academia universe. Fibre Hero: Best Jeanist, whose civilian name is Tsunagu Hakamada, is popularly known as the previous No. 4 Pro Hero and currently holds the title of the No. 3 Pro Hero. With many achievements to his name, the hero is also an eight-time winner of the “Best Jeanist” accolade. Tsunagu is a dashing young man with a flair for the dramatic. Tsunagu was formerly considered fourth among Japan’s heroes, but after All Might’s retirement, he rose to third. He is a very responsible individual who firmly believes that people in powerful positions should work hard to maintain a good physical and social image as they are big sources of influence and inspiration to others. After his work, his passion lies with all types of jeans and fibers. This is apparent from situations when Tsunagu frequently refers to jeans, denim, and numerous other sewing and fabric-related terms in his talks, asking his recruits to maintain their lives straight like their jeans. Tsunagu is a hero who takes his job extremely seriously. All in all, Best Jeanist is unselfish, courageous, and charming, and a person who aspires to bring peace to all people. He believes that a true hero is one who does not make excuses, no matter how bad the circumstances are.

Tsunagu Hakamada’s quirk is known as Fiber Master. His abilities that mainly lie with the manipulation of fibers, allow Tsunagu to unravel portions of his garments and use the strong fabric cords to confine prey. Always prepared to face a villain, Best Jeanist is always ready to face a villain as even his hero suit is a weapon with it being coated in denim from head to toe which makes it a supply of readily controlled fibers to weaponize. Another recognized application of his quirk is the manipulation of fibers in allies’ garments for forced evasive movements. Tsunagu, deserving of his high rank, is a tremendously powerful hero, as seen by his fight against the League of Villains. Tsunagu was not only effective in detaining many Nomu during the Kamino Incident, but he was also able to temporarily immobilize the strongest villain, All For One.

Will Best Jeanist Die In My Hero Academia (Anime)? 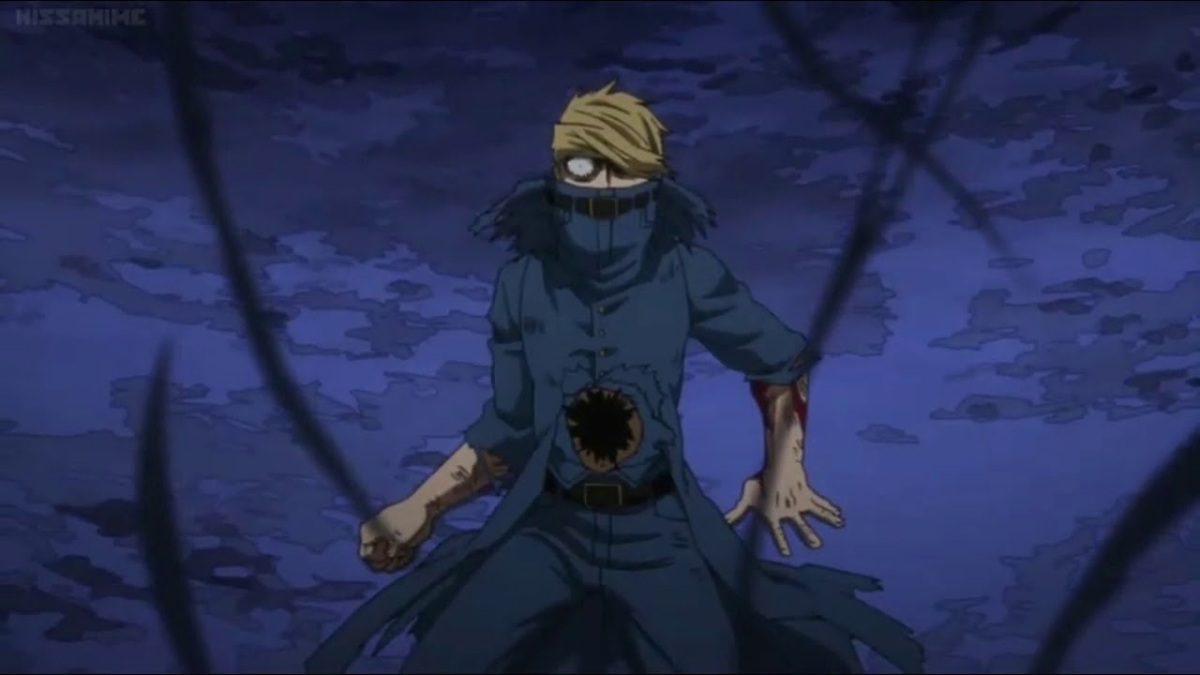 In response, Best Jeanist manipulates his companions’ clothing to move them out of the blast’s path. All For One floats over Best Jeanist using Air Walk and compliments the No. 4 hero on his abilities. It is then that understanding dawns on Best Jeanist as he comes to the horrific realization that All For One is the final boss of the League of Villains’. Even so, Best Jeanist, undeterred, uses his jean fibers to strike back at the powerful villain. All For One quickly counterattacks and fires an air cannon towards Jeanist, due to which the latter’s stomach bursts, gushing a lot of blood and the earth underneath him shattering due to the impact. As Best Jeanist passes out, the heroes are vanquished. He is subsequently shown to have lost a lung as a result of his fight injuries. Thus, as of now, Best Jeanist is alive, albeit with severe injuries in the anime. Keep on reading to find out the current status of the beloved hero in the latest chapters of the manga, which is far ahead of the timeline of the anime.

Will Best Jeanist Die In Boku No Hero Academia (Manga)?

The answer to the above question is quite a complicated one. Sit tight as we explain in detail the actual fate of Best Jeanist. The whole fiasco begins with the Hero Public Safety Commission assigning Hawks, the No. 2 hero, with the task of infiltrating the League as a double agent in order to one-up the paranormal Liberation Front, formerly known as the League of Villains. Hawks, a master of deception and infiltration, not only misleads the villains’ league but even the paragons of justice and, after many challenges, ultimately succeeds in exposing the Paranormal Liberation Front and its goals on his own, allowing the Hero Association to avert the worst-case scenarios. However, the road to success is not straight as Hawks had to go to terrible lengths to show the League of Villains that he is sincere. His final assignment, however, put the cherry on the top with being the most difficult task to complete. Dabi instructs Hawks to bring Best Jeanist’s dead body to the league. The manga show Hawks successfully completing the task to solidify his identity as a newcomer. Despite his suspicions about Hawks’ loyalties, Dabi verifies Best Jeanist’s body in the series.

So the question is whether Best Jeanist is actually dead? The answer is thankfully a big no. in the later parts of the manga, Chapter 299 to be exact, we see Best Jeanist driving a fast automobile with a severely injured Hawks in tow. Hawks’ injuries are so severe that Best Jeanist laughs about how pleasantly surprised he is that the former is still alive and kicking. It is at this moment that Best Jeanist reveals the truth about his apparent resurrection. He reveals that the capture of the Nomus had brought forward a new medical technology with which the Central Hospital could make his death-like state a reality. It is also due to this technology that Hawks lived despite his grave injuries. This technology is, however, not perfect as its drawbacks include the patient feeling extremely exhausted for a long period of time.

On My Hero Academia: Streaming & Manga

With a whopping 100% rating on Rotten Tomatoes, a 4.6/5 on Crunchyroll, and 8.4/10 on IMBD, My Hero Academia is available for streaming on a number of platforms like Netflix, Hulu, Anime-Planet, Funimation, Crunchyroll, and more. You can also read the manga at various sites like the Official Shonen Jump site and more. My Hero Academia known as Boku no Hero Academia in Japanese, is originally a superhero manga series illustrated and authored by Kohei Horikoshi, which was later adapted into an anime series.

On My Hero Academia: Synopsis

Over the years, the number of quirks, or newly found superhuman capabilities, has progressively increased, with 80 percent of mankind possessing varied talents ranging from element manipulation to shapeshifting. This renders the rest of the world as weaklings, and Izuku Midoriya is one of these people. Midoriya Izuku, our protagonist middle schooler, though has big dreams with him waiting to become a hero since he was in diapers. Izuku’s misfortune does not deter him from his ambitions, as he does what he can by taking detailed notes of each and every hero that he comes across. His hard work pays off when he encounters All Might, the world’s greatest hero and his very own personal idol.

This encounter leads Izuku to discover All Might’s shocking secret. All Might’s quirk is a one-of-a-kind power that can be passed down through the generations, and in a surprising turn of events, he picks Izuku to be his successor! Izuku enrolls at UA High, a prominent high school known for its legendary hero training program, and this year’s freshmen appear especially promising after months of tough training. Thus begins Izuku’s journey as a future hero as he soon discovers what it means to be one, thanks to his odd but gifted classmates and the rising danger of a wicked organization.

Also read: Will Katsuki Bakugou Die In My Hero Academia?

Jujutsu Kaisen is one of the best anime in the industry, being one that has gained large critical acclamations and...

Ben Aldridge Partner: All About The English Actor’s Personal Life

Ben Aldridge Partner: Ben Aldridge is one of the young and influential personalities today. This, in turn, makes people very...

What Devil Fruit Did Brook Eat? The Musician & Swordsman of Straw Hats Discussed

Who Is Tess Daly Married To? All About The English Model