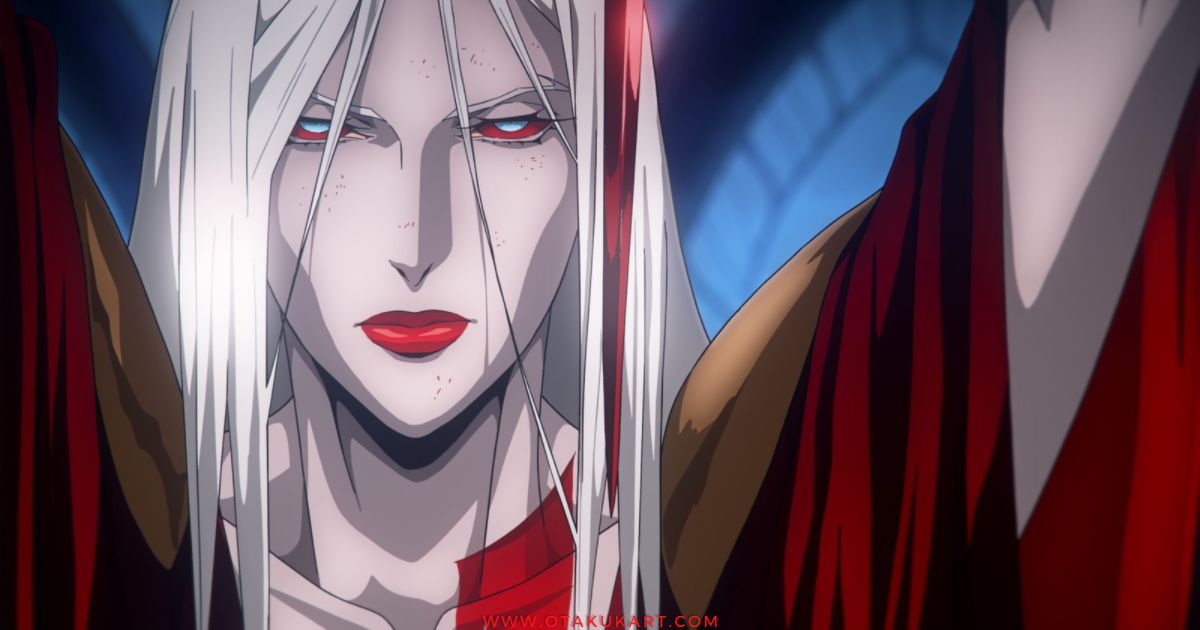 Castlevania’s fourth and final season has been full of unexpected events. Not only did we see more depth to both the villains and the heroes, but we also saw some meet with the most unsuspecting outcomes. The five-year-long journey has come to quite a dramatic end with the final season. One of the best things about Castlevania is that it isn’t easy on either the villains or the heroes. Both go through quite a lot in order to achieve what they set out to do. Here, we shall set out to see, will Carmilla die in Castlevania.

Not even Dracula, the most powerful being in the Castlevania universe, has it easy. With the backstory that it tells of each character, it becomes quite complicated to either simply love a character or hate them. Be it, mortals or immortals, Castlevania shows each of them having their own struggles and shortcomings. In the end, it leaves it to its viewers to decide to tackle the questions of morality.

One such character whom we love to hate is none other than the Vampire Queen, Carmilla. Responsible for a lot of evil and at the same time with her own story to tell, what fate does the final season of Castlevania hold for Carmilla? Will Castlevania end with the death of the all-powerful antagonist, or will she live to achieve her dream of ruling the entire world? Only one way to find out. Read the article that has been exclusively dedicated to Carmilla and her end fate.

The leader of the Council of Sisters and one of the four Queens of Styria, Carmilla is one of the most powerful characters in the Castlevania series. Bearing the title of the Military General of Dracula’s Army, she was a character who exercised major influence throughout the series. A force to be reckoned with, Carmilla is rightfully dubbed as the second most powerful antagonist after Dracula. A master manipulator and genius strategist by nature, she belonged to the faction of the vampire aristocrats and temporarily served as Dracula’s subordinate general in the attempt to overthrow him and become the Queen of the vampire race. The main objective behind all her schemes was to raise the position of the vampires to that of being the world’s new ruling race.

Carmilla is an enigmatic character, much of whose past is shrouded in mystery. Most of what can be inferred about her personality is that she detests, from the very bottom of her heart, mad old men and, well, just men in general. A power-hungry and vengeful character, Carmilla’s schemes revolve around her becoming the most powerful ruler in the whole world. While initially, one may take her as a hypocrite being, the same as the rest of the vampires due to her single-minded world-dominion goals, Carmilla’s reasons are far from what can be simply explained as greed for power. Far more complicated than what initially meets the eye, her actions are linked to her tragic past.

Though not much is revealed, in one of the episodes, we do get to know that she was initially a human who had been transformed more than a hundred years ago into a vampire by an unknown vampire aristocrat. In her own words, it is revealed that the so-called ‘old man’ was nothing short of a mad man who treated those around him with cold cruelty. Well, you guessed the next part correctly, Carmilla had to kill the very person, whom she was bound to, in order to save her skin. Thus, it was this tragic event that played a major role in shaping the Carmilla that we know of today.

Will Carmilla Die in Castlevania?

Yes, Carmilla does die in Castlevania. She dies in episode 6 of the 4th and final season of Castlevania, titled ‘You Don’t Deserve My Blood’ by committing suicide. The entire episode, which was dedicated to her intense fight with King Issac, who had attempted a raid on the castle, ended with her death. Mind you, though, it is apparent from the epic fight that Carmilla was eons stronger than Issac and that he only defeated her by outnumbering her by a few hundred. As Carmilla fought creatures after creatures, the whole room had become flooded with the blood of the dead. It was then that King Issac decided to grace her with her present.

Though very tired, she still easily overpowered Issac. Hence, Issac, who was determined to win, smartly attacked her with a large number of night creatures. She fought till her last breath and when she couldn’t go anymore, stabbed herself in the heart, after which her entire body exploded. In her final moments, Carmilla told Issac that none of them were deserving of her blood and that she would be waiting for him in hell to kill him a second time. In the end, Carmilla, who realized that she was about to die, went out on her own terms. Although she died, the Vampire Queen’s pride and soul were unbroken till the very end.