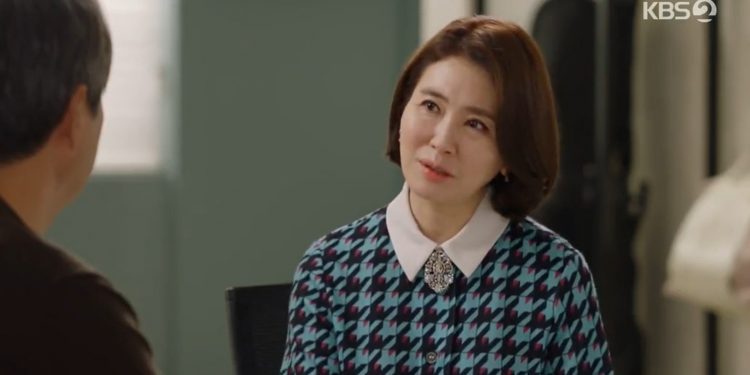 ‘Young Lady and Gentleman’ episode 34 will be out soon. And while Young Guk and Dan Dan might not be done with each other, Dae Beom and Se Ryeon seem to be heading towards the end of their relationship. Young Guk had decided to end it with Dan Dan, but she didn’t want to give up. Knowing that he’s single again, she spoke up her mind and told him that they never broke up. Showing him the old text, she reminded him that he liked her too. But Young Guk didn’t want to talk about things he couldn’t remember and told her to get over the past.

While Mi Rim joined Jun O and Mi-Sook for some lunch at Mi Sook’s house as he kept teasing her, Se Chan is also back at setting his father and Dan Dan together. Having a pizza date with the family, Dan Dan suggested playing some games after lunch. A visit from the waiter got the whole table into a fit of laughter as she apologized for calling Dan Dan Young Guk’s elder daughter. Calling her outside, Young Guk told Dan Dan not to act like that in front of children. But Dan Dan is not leaving any chances now and having fun of her own.

While Dae Beom was looking for some different ways so his family would accept Se Ryeon. Mi-Sook and Dae Ran were trying their best to rekindle the romance between Se Ryeon and Seung Ho. And their plan seems to be working as Se Ryeon is enjoying her time with him. But as Seung Ho dropped her home and gave her some earrings as a gift along with a hug, Dae Beom saw everything from a distance. Going to her house after a while, he asked him about her day and got into a small argument. Apologizing to her, he asked her not to lie to him as she could do whatever she wanted.

While knowing Ji Young was back, Soo Cheol couldn’t even sleep. The thoughts of his ex-wife taking away his daughter kept coming to him. Taking Anna and Dan Dan’s DNA sample, Soo Cheol confirmed that Anna is Ji Young and went on to confront her. The flashbacks of her leaving him and Dan Dan when they needed her the most. The time he even contemplated killing himself. And the way she came back as Anna and played innocent and made her way into their life, Soo Cheol was furious as he went on to see her. Smacking her on the face, he told her to stay away from him and Dan Dan. Or he would literally kill her. Throwing the DNA test at her, Soo Cheol left, getting frustrated over how he could fall for her like that.

‘Young Lady and Gentleman’ episode 34 will release on January 16, 2022. Meeting Dan Dan, he told her that neither of them had to go to the States now. Telling her that leaving the restaurant that he just opened won’t be the right thing to do. He also told her not to meet Anna as she’d keep feeling guilty about not going to the States with her. He was coming back to work as he got to know that Yeon Sil went to see Anna again. He told her not to visit Anna again, or he’d divorce her.

Asking to meet Soo Cheol, Anna did tell him about the accident she went through years ago. But coming clean to everything to Dan Dan is a huge task as she is already shocked over the fact that her mother is alive and abandoned her in childhood. Meanwhile, Sa Ra is starting over with Cha Gun despite him not having a house or a car.

Where To Watch ‘Young Lady and Gentleman’?

‘Young Lady and Gentleman’ episode 34 will be available to watch on the streaming platforms Rakuten Viki and Viu. Along with the channel KBS2.