Will My Hero Academia's symbol of justice, All Might, die? Can Sir Nighteye's prophecy be changed? 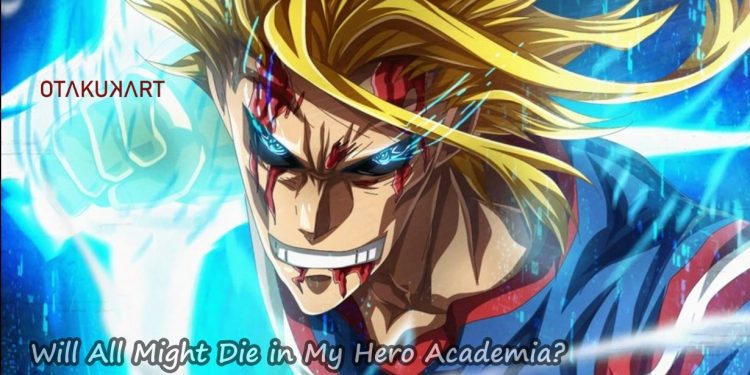 Shounen anime have this typical obsession with killing off the fan-favorite sensei to give the protagonist a final push that brings the most out of them. Be it Koro-sensei from Assassination Classroom or Naruto’s Jiraiya sensei. Not even plot armor could save them from breaking our hearts. I fear My Hero Academia’s All Might is heading towards a similar destiny, and the author has given us more than enough hints that we may not be hearing the iconic “I am here” line after some time. Will All Might really die in the series? Here’s everything to find out.

Being the #1 hero and the sole symbol of justice for so long, it’s obvious that all the villains want him dead. Moreover, ever since his fateful battle with All for One, All Might’s health has been deteriorating rapidly. His situation is so bad that he can hardly sustain his strong and sturdy form hardly for seconds. Does that mean All Might’s end is near?

Thankfully, All Might is still alive in the My Hero Academia series. Despite going through numerous sure-death events, he has somehow managed to survive. However, he had to retire from his hero work since his injuries didn’t permit him to push any further.

But that’s no good reason to feel relieved since Sir Nighteye predicted with his foresight quirk that All Might would have a gruesome death in the hands of a villain. He tried to stop All Might from risking his life any further, but he failed to do so. Sir Nighteye specified that All Might would die approximately within 5 to 6 years, which is the present-day you see in the series. So, be sure to keep a bag of tissues when you start reading a new chapter. A storm of despair can hit us at any moment.

Tomura Shigaraki, the leader of League of Villains, will most likely be the one to kill All Might. Throughout the series, he mentioned multiple times that he wants to obliterate All Might and the hero society that looks up to him. Shigaraki’s recent powerups confirmed that he wasn’t bluffing at all. He disintegrated an entire city with his quirk, and I don’t think All Might, at his current condition, can survive something like that.

If that’s not convincing enough, Shigaraki has grown a lot stronger after going through a four-month-long surgery under Dr. Ujiko. Moreover, Sir Nighteye specified ‘gruesome death’ in his foresight, so it’s clear that All Might won’t die naturally or in hospital. Talking of gruesome, what can be more gruesome than a maniac like Shigaraki torturing him to death?

As I said, Shigaraki holds a heavy grudge over All Might and the society that he established. He desires to uncover the dark side of the hero culture that is drowning in hypocrisy. Everyone sees heroes as the ultimate savior, but none of them stepped up when he was in distress. He was all alone with the awful memories of disintegrating his family to death haunting him. All for One found him and brainwashed him to become the symbol of terror. Thus, the boy who once dreamt of becoming a hero became their biggest enemy.

Moreover, Shigaraki is the grandson of Nana Shimura (All Might’s teacher and the previous user of One for All), making the death look even more striking. It is possible that Shigaraki isn’t aware of the fact yet, and when he finds out about his family, he will lose his sanity and kill All Might.

Others Events that Hint All Might’s Death

No matter how hard All Might tries to stay optimistic around Deku, he knows that the prophecy cannot to avoided. He admitted to Aizawa that he feels helpless about not being able to help the new generation of heroes. Apart from Sir Nighteye’s prediction, there are multiple subtle hints teasing that All Might won’t be around us for long.

My Hero Academia’s story started with Deku narrating his journey of becoming the #1 hero. This confirmed that All Might would step down from his position or die by the time he became the top hero. His words sounded like a eulogy for the hero who made the biggest difference in his life. However, it’s not enough reason to ensure anything, but it is worth mentioning.

All Might’s health is deteriorating day by day. Even if Shigaraki fails to kill him, he will most likely die of his previous injuries. He already had half of his respiratory system destroyed and his stomach removed. Yet, he kept living dangerously, and his condition is pretty critical now. Moreover, One for All quirk is like a torch passed on from one to another. Once Deku masters his quirk, All Might will probably lose all his powers. In case his quirk is the only thing that kept him alive so long, he will inevitably die when it’s gone.

In Chapter 241, All Might is seen writing notes about all the other One for All users. He isn’t helping him in combat anymore, or rather he feels that Deku doesn’t need him anymore. It feels that he is preparing Deku for a situation when he won’t actually be around to mentor him. The narrative has finally pushed All Might to be the guy who gathers info.

Deku’s story began with him looking at All Might from the back, dreaming of reciprocating his idol’s actions someday. Little did he know that the roles would be reversed in the future. While Deku was mastering Blackwhip, All Might looked at him from the back and said, “That day feels ancient history now…you don’t look back at me anymore… you don’t need to..” In Chapter 257, All Might is sad because his role towards Deku and Bakugo has been diminished.

Can All Might’s Future Be Changed?

Yes, with the introduction of Eri in the story, there’s a slim chance that All Might’s death can be avoided. Sir Nighteye’s every prediction has turned out to be true, except for one. He predicted that Deku would die in the hands of Overhaul, but thanks to Eri, things turned out differently. Thus, we can say that Eri is the nexus character who has the potential to change the prophecy. Sir Nighteye himself died believing that the collective energy and willpower of everyone can indeed change destiny and bring out the best-case scenario. I really hope Nighteye’s dying words turn out true!