How does the Upper Three Akaza meet his end? 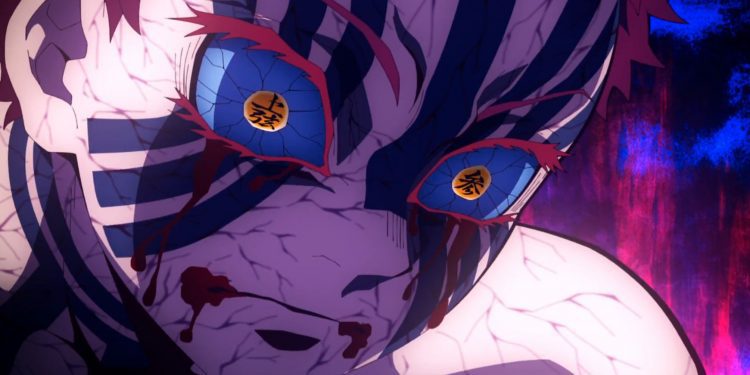 Taisho-era Japan is attacked by humans who have turned into monsters. The monsters feed on humans and create chaos with their supernatural abilities. Thus, an underground group called Demon Slayer Corps is on the lookout to exterminate these demons. Demon Slayers have unique knowledge of dealing with the monsters. They use special techniques like “Breathing Styles”, which elevates them to another level. Furthermore, the slayers use weapons built with elements like wisteria flowers and Sun Steel to fight their opponents. Tanjiro is a young boy whose life turned upside down when demons brutally killed his family. Though the demons could not quite take Nezuko’s (Tanjiro’s sister) life, she has turned into a half-demon and half-human. Along with the lone survivor Nezuko, he sets out on a quest to avenge the death of his family. During this journey, Tanjiro faces various demons, one of them being the Upper Three Kizuki, Akaza. Will Akaza die in Demon Slayer? Who will kill him?

Kimetsu no Yaiba or popularly known as Demon Slayer is the manga series originally written and illustrated by Koyoharu Gotouge. It received an anime adaptation produced by Ufotable. It was released in Japan in the April of 2019. The first season had a total of 26 episodes. However, considering its popularity, a sequel movie was released in 2020, Demon Slayer: Kimetsu no Yaiba – The Movie: Mugen Train. Mugen Train became the highest-grossing film within no time. Not only that but Demon Slayer was renewed for a  second season. It adapted the Mugen Train arc and the Entertainment District from the manga. The manga sold over 150 million copies, and it has received the top 10 spots in the world of manga. However, the anime is critically acclaimed all over the world.

Will Akaza die in Demon Slayer?

Yes, Akaza will die in Demon Slayer. Akaza is one of the most iconic demons who makes his first appearance in Mugen Train. He is also the one that is responsible for the death of Kyojuro Rengoku at the end of Mugen Train. Akaza is known as Upper 3 or Upper Moon 3 in the twelve Kizuki. He is one of the strong foes the slayers have ever met. Akaza in Kimetsu no Yaiba is killed by himself. He dies at the Infinity Castle Arch. However, it is shown in the manga that Tanjiro, Hashira, and Tomioka had already made him weak. Tanjiro and the demon had an intense fight where Tanjiro’s words made Akaza remember his human life. Akaza, however, used his forbidden Blood Demon Art called Destructive Death on Tanjiro.

Throughout the fight, the demon was constantly reminded of his human life. Akaza was reminded of his fiance Koyuki while fighting Giyuu. He does not recognize Koyuki, but in his mind, she constantly asks him why he would want to kill people? Upper 3 Demon Akaza regains his memory and now wants to destroy himself. But, the demon king, Muzan Kibutsuji, does not want that to happen. And as Akaza remembers Muzan, he starts regenerating. However, Koyuki expresses her gratitude which has Akaza to let go and disintegrate.

Also Read: How to Watch Demon Slayer Season 2? Is it Available on Netflix?

Tanjiro Kamado is the protagonist of this series. He has a big heart and is optimistic. He learned Water Breathing and sword style under Urokodaki but later shifted to the traditional Hinokami Kagura. The son of a coal merchant finds his family slaughtered by the demons. Nezuko is Tanjiro’s sister. She was turned into a demon when the Kamado family was attacked by demons. Nezuko, however, had all her memories intact and thus, could not be turned into a demon completely.

Inosuke Hasibira, a boy, was raised by the wild boars after his mother was killed by demons. He is mostly self-taught and uses a unique style called “Beast Breathing”. And then we have Zenitsu Agatsuma, who is so scared of demons that he could only fight them when he is asleep or unconscious through his “Lightning Breathing.”

The biggest question now is, when will episode 5 of season 2 come out? Fans who have been expecting that the next episode is going to be released during Christmas or the New year have been disappointed. But, as the report goes, the release date of episode 5 is scheduled for 2nd January. However, the Entertainment District Arc is said to be released every Sunday in the future. Fans argue that season 2 will just have eighteen episodes.

Also Read: Is The World’s Finest Assassin Gets Reincarnated in a Different World as an Aristocrat an Harem Anime?