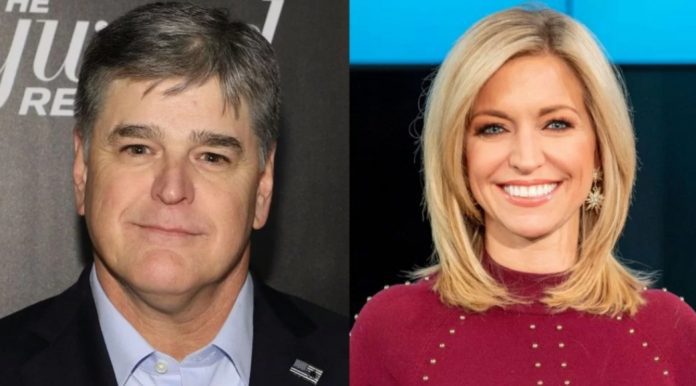 Today, we will discuss Why Sean Hannity Won’t Admit To Dating Ainsley Earhardt? These days, they are making the headlines with the commentator not accepting to share a romantic relationship with the host of Fox & Friends. Before diving into what’s happening, let’s learn a bit about them.

Sean Patrick Hannity is a political commentator and hosts his self-titled talk radio show. Earlier, he has also worked at WVNN, WGST, WABC, and WOR. He also earned quite a recognition for his commentary program titled Hannity. While, on the other hand, Ainsley Earhardt is a television host, gaining prominence with the show mentioned above. Besides this, she has also hosted shows like All American New Year’s eve, and America’s News Headquarters. Not to forget to mention her being on the panel for The Live Desk. Talking more about her, Ainsley is an author too. The Light Within Me: An Inspirational Memoir is penned down by her.

Coming back to the ongoing gossip, Sean doesn’t mind being questioned tough questions on his show. however, he is a very private person. People didn’t even know about his divorce from his ex-wife, Jill Rhodes. His new romantic involvement with Ainsley made the fans more curious about how things are going between them. But he keeps himself away from commenting on anything about his personal life. To know, Why Sean Hannity Won’t Admit To Dating Ainsley Earhardt, I would highly recommend you to give this article a thorough read to the end.

After being legally done with Jill Rhodes, Sean Hannity appeared to go public with Ainsley Earhardt in August 2019. They were spotted together hand-in-hand, attending a party. It is reported that she hosted Fox & Friends from the basement of sean’s mansion during the Covid 19 pandemic. even though the pair went public, don’t expect Sean to admit it. here is what we know about Why Sean Hannity Won’t Admit To Dating Ainsley Earhardt?

When asked about Ainsley, he said ‘I do not discuss my personal life in public.‘ Since he is very famous and also a controversial person, he seems to keep himself tight-lipped. Their relationship is now more like an open secret to all of their fans. moreover, Ainsley is also very cautious about the same, stating that she isn’t seeing anyone at present. She added saying that she is just focused to raise her daughter into a beautiful person. However, Ainsley also said ‘As anyone at Fox News will tell you, Sean is a wonderful person and whomever he chooses to date will be extremely fortunate.’ Did she just call herself to be fortunate enough? Even though she hasn’t admitted to being dating Sean, she has always to her fans about the same.

Once, Sean was asked about his favorite co-host. He joked and laughed out saying, it’s either Ainsley or Steve Doocy. Talking more about the denial from Sean’s side, he insisted that his personal life takes a backseat to work. He explained saying that he is a hermit and recluse during his workdays. But, he has his girlfriend’s back. She gushed over him saying that he is a good and a real person and has helped all of their careers. Coming across all the hints, their dating life is very prominent. Sean Hannity, being a too private person is what stops him to admit dating Ainsley Earhardt.

Learning about Why Sean Hannity Won’t Admit To Dating Ainsley Earhardt, fans are now interested to know a bit about his past marriage. the duo met each other in 1991 at WVNN. After dating for some time, they ended up marrying in 1993. But, their marriage didn’t last forever, and finally parted ways with a mutual divorce in 2020. With her, he shares a couple of children- Patrick (son) and Merri (daughter).

Best Wishes to Sean Hannity and Ainsley Earhardt for their romantic relationship. Even if the pair doesn’t admit to seeing each other, we hope their romance to be eternal.