Team science put aside worthy names like Tsukasa, Hyoga, and Magma and relied upon Kohaku instead. Is Kohaku a better warrior than the likes of Tsukasa? 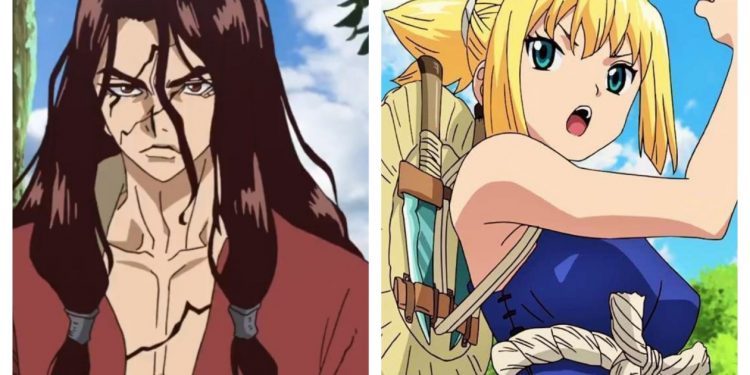 Senku and his kingdom of science are all set to step on the Moon and bring the fight right to Whyman. Their two-way rocket has a total capacity of three persons. The three candidates will include a pilot, a scientist, and a warrior. Senku will be a scientist for obvious reasons, and they risked reviving Stanley to make him the pilot. However, while selecting the warrior, team science put aside worthy names like Tsukasa, Hyoga, and Magma and relied upon Kohaku instead. Is Kohaku a better warrior than the likes of Tsukasa Shishio?

I am a bit doubtful about Magma, but Tsukasa and Hyoga are undoubtedly better fighters than Kohaku. Their battle experience is unrivaled and can turn the tides of a war single-handedly. Then why Kohaku? Is it because Kohaku has been the main character of the series? Here, we have tried to explain why Kohaku is the best fit for the Moon mission despite her shortcomings.

What could be better than proving her worth by passing a test by Tsukasa himself? Tsukasa called her separately near a cliff and surprised her with a sudden attack. Kohaku did pretty well in holding her grounds against him and blocked him with everything she had. For a moment, Kohaku thought that Tsukasa had decided to betray them.

To Kohaku’s relief, Tsukasa was just testing if Kohaku was the worthy warrior to go on the space mission. Kohaku passed the little test that she was put into. She showed Tsukasa how much she had grown ever since their first meet. He admits that after countless life-and-death battles, Kohaku is as capable a warrior as Hyoga and himself. However, she is still inferior to him in martial arts, but Tsukasa believes that advanced weapons will make up for the skill gap.

Kohaku Is More Agile and Nimble

Walking on Moon isn’t the same as walking on Earth, not even close. Moon’s gravity is one-sixth of Earth’s, and astronauts basically leap around on its surface. Moreover, the heavy astronaut’s spacesuit makes fighting more of an ordeal. Thus, an agile fighter like Kohaku is the best option to go for. She jumped higher than Tsukasa in the test anyway, so there shouldn’t be any debate, at least on agility.

It’s no secret that Kohaku is lighter than any of the other warriors. Kohaku going for the Moon mission instead of Tsukasa clearly means that the scientists will have dozens of kilograms less to worry about. The rocket is already pretty complicated, with millions of parts in it. Thus, they will have to take care of the weight to make the return trip possible. Things like adequate space food and an astronaut’s suit cannot be compromised, so the only way out is to have lighter astronauts.

Kohaku has been gifted with incredible eyesight. From figuring an anomaly in the North Star to finding an oil reserve from an aerial photo taken from a hot air balloon, Kohaku’s sight has been proven useful many times. In the Moon mission, it was Kohaku who pinpointed Whyman’s accurate position.

The Moon is a vast wasteland, without many structures obstructing our vision. So, even if the rocket lands away from Whyman, Kohaku’s enhanced vision will be the key to spotting him. Moreover, there’s no way of telling what the challenges they might face on the Moon are. So, it’s better to have a versatile warrior like Kohaku.

Thanks to her hunting experience, Kohaku has a sharp instinct. She can analyze a lot of information fast and implement them according to the situation. She has always been quick in understanding the complicated science theories that Senku demonstrates.

I am not saying Tsukasa is dumb, but Kohaku shows a much more affirmative approach towards a situation. She comes up with new and out-of-the-box ideas that no one else could think of. On the other hand, we all know how Tsukasa thought of establishing a new world just with the strongest warriors. They can’t afford to have someone this short-sighted in the Moon mission.

Is Kirstie Allsopp Pregnant? All To Know About it